It's A Dog's Life 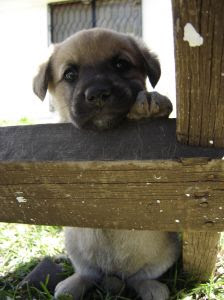 I wouldn't call myself a dog lover.
I mean, I would go out of my way to kick them or anything, it's just that I'm none too fussed on all that barking and crotch sniffing.

And, as regular readers of this blog know, I have a penchant for white linen trousers, which don't exactly play well with mucky paws.

So all in all it has been pretty convenient that my son is allergic to them. It's been a cast iron excuse to all those requests from the kids. Even the heart felt letter to Santa begging for a puppy I was able to elbow aside safe in the knowledge that I was looking after my son's welfare.

You can imagine then my consternation when it transpired there was one breed Joe wasn't allergic to.

You couldn't make it up could you? Bloody millions of dogs out there all bringing on red eyes and asthma attacks, only for my son's best mate to choose the very type that doesn't cause any problems.

Of course I could have stood firm and remained focussed on my white trousers, but I'm a working mother and guilt is my default setting...

Which is why I now find myself the owner of a three month old Border Terrier called Peanut. Named such in a classic twist of Black humour referencing another familial allergy.

And in a classic example of life in Casa Black never going according to plan, Peanut managed to injure herself in the first week with us.

See I disovered by chance that my nearest neighbour is a dog sitter and was almost breathless with anticipation of pulling on those troos and heading out for lunch with my mates. Unfortunately, Peanut became similarly excited and jumped under the dog sitter's feet.
Cue much yelping (the pup), much weeping (the dog sitter) and much bill issuing (the vet).

Anyways Peanut has broken all the toes on her front right paw. All of 'em. She's in a full leg pup plaster and is housebound for the next three weeks. I've put away my glad rags.

On the plus side however, I've done loads of writing. Being stuck at home, it sort of seemed rude not to. In fact I've almost finished the latest round of edits on book five. I'll be able to sub them early!!! And I've virtually filled a notebook with ideas for new projects.

Give it time = you'll come to love this puppy. In five years she'll have a place in your stories. Going for walks will give you inspiration time. (I speak from experience - became an unwilling owner of a dog. Learned to forgive, and then enjoy her dogginess!)

Aww there must be something in the air - I'm at caving point with the purchase of a puppy - we've already named him/her Fleagle after the Banana Splits character of the same breed (!) so we HAVE to get one now, right? Bless little Peanut, she looks adorable.

Border terriers are lovely little things. She'll get under your skin soon enough (in a non-allergenic way, of course). Poor Peanut though, what an inauspicious start!

Aw! I am a total dog convert now, having got a labrador three years ago. Weirdly, our puppy broke a toe too!