GIVE ME A BREAK!

Apologies in advance of the ranting which may issue forth from this missive, dear reader.  For as I write I am still suffering the bubbling aftermath (like those espresso coffee-maker machines if you want to get a proper AUDITORY feel of the emotion) and as my counsellor has said a couple of times recently (YES I see a Counsellor, what - do you have a PROBLEM with that?!) I need to release my anger a bit more.

So I stand – okay then, sit – before you today a beleaguered, frustrated, anxious, ANGRY BASTARD and the stupid little passive creature sitting on one of my shoulders (and right now I don’t CARE which bloody shoulder it is – whichever one I say would have some kind of hidden ‘meaning’ and I’m so NOT ABOUT hidden meanings at the moment; let them stay hid is what I say to them) is not getting a look-in.  I AM CROSS.
(n.b. there’s also no significance in my use of the word ‘cross’ – this is not a piece of work which I intend to be wheedled through nor psychoanalysed for extraneous undercurrents.  This is simply a RANT of the highest order.  First draft.  Un-cut. End of.) 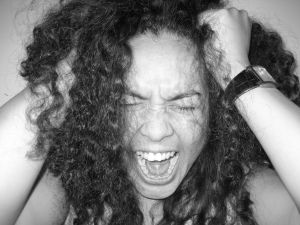 The string quartet’s already been dealt with and I’ve slapped a “Do not Resuscitate” Post-it Note on each of their heads – so there’s no point in even IMAGINING you can hear plaintive strains of Beethoven’s Violin Concerto in F-Minor (even if he didn’t blummin’ well write one.  I don’t CARE – didn’t I mention?) soaring sorrowfully over the following words…

I’ve never asked for much in life.  Nothing on a grander scale than, say, warmth, love, health, happiness, all those things that Dale Winton (does he still do the Lottery thing?) can’t hold over me in his sweaty orange fist and try to tempt me to ‘win’ by answering questions about Mesopotamian Geography and/or Alan Bennett plays.  A simple soul.  That’s me.  And as long as there’s always been a safe distance between me and somewhere that sells chocolate then I’ve generally been content enough.

And you all already know about the creepy bosses and the ridiculous places of work I’ve had to endure over my time.  Well, there’ve also been creepIER boyfriends and worst-case-scenario family-type situations and marriages of the disastrous order and struggles to keep three jobs going whilst being a single-parent….  And if I’m not being deserted then people are dying on me (no, seriously).  But – NO - I don’t want sympathy - a hug will only make me bawl and THAT would ruin my mascara; no - I just want a FUR-LIPPIN’ GODDAMNED BREAK, WOULD YOU MIND?!

Like Kate Bush, I’ve done ‘deals with God’; in my youth anyway.  I used to trade things like being Nice and Good for eternity in return for not being bullied tomorrow and/or a place on the school bus which wouldn’t entice aforementioned Bullying.  And I wasn’t listened to.  Either that or, as I convinced myself - I wasn’t worthy of being listened to – there were starving people in third world countries far more deserving of God’s attention that me.  And in fact I was bullied BECAUSE of my trade-off attempts with God.  This made me A Bad, Bad person.

I should’ve had a counsellor back then.  I’d be flippin Simon Cowell by now.

Speaking of which there was always, at the back of my mind, the chance I might be ‘discovered’.  Like all the Audrey Hepburn/Doris Day fill-ums I’d ever been mesmerised and entranced with, my redeeming dream was that there was always the possibility that my Knight, my Hero, my Saviour was simply waiting for my lowest, point-of-no-return- moment before he would (*ahem* HE? - mental note to deal with this later) appear, strong and masterful on his thunderous steed and sweep me away from ‘all of this’. A cloud of dust would follow and my happy ending would begin.

He never appeared.  My mind gave him reasonable excuses like the new bypass around the town which hadn’t shown up on his medieval A-Z… Just call me Miss Benefit O.T. Doubt.

I read my horoscope diligently.  I did whatever Justin Toper/Russell*/Mystic Meg suggested would be safe for a watery woman on any given day and waited with hope alive in my chest.  I was kind to animals/old people/plants/siblings and knew that I couldn’t be faulted for being a Bad Person.  My day would come. Hadn’t I deserved it, after all?

And here is the silent positivity which I have always carried around with me.  I’ve never shown it to anybody before, and I’ve always laughed and agreed with people who’ve called me a Pessimist in the past because of my ‘ah, no, it’ll NEVER happen to me’ attitude, because inside I’m always thinking “oooh, how much sweeter will this taste WHEN it does?!” Some call it Pessimism.  I prefer to call it …well,  now I call it  my ‘Mad-Sweet Delusion’.

And the straw that broke this Camel’s back?

I’m not blaming him personally you understand; rather the readers and judges of this year’s ‘People’s Author Competition’ which dead-lined on July 1st and I have just this morning found out that the 16 finalists have already been contacted.

You don’t need me to tell you that I wasn’t one of these talented, lucky people.

(cut to scene where Prince Charming sits scratching his head atop his monstrous but weary steed whilst STILL trying to work out if the A421 goes straight through Nether-Hampton or if he should just jack it all in and head for Clapthorpe and the nearest Little Chef).

And right now I’m beginning to feel like one of those sad wannabes on the X-Factor.  I just don’t Got It.  But what I HAVE got is about a hundred trillion *”NO’s” filed away in the ‘Rejections’ folder.  Maybe it’s about time I started believing what they say and STOP with this incessant deluded belief that I can write. I clearly can’t. And everyone can see it bar me.

*I bet Louis Walsh would keep me in for entertainment value, though.  Just call me the Jedward of the writing world…

Well (keeps close to open door for handy exit), there'll...erm...always be other competitions...TAXI!

You need wine. And chocolate. And maybe cake. And a holiday. And a good friend . . . I hope that, at the very least, the latter is available,

Oh Debs, even in your dire moments you can't help being funny... I KNOW one day I'll read one of your novels in print.Am sending you a big hug and in the meantime, give yourself a break, YOU ARE A WONDERFULLY TALENTED WRITER. x

LOL, Debs - poor you! I entered and no, i'm not one of the finalists - i mean, what's wrong with them?:) So much for my dreams of being interviewed by Alan on his show, sitting next to Robert Pattinson who'd be promoting the new Twilight film... Ahem. *shakes self* Perhaps it's just as well i didn't get through!!!

Heh ho, all we can do is Calm Down and Carry On. And eat chocolate.

Never give up, Debs. Your day will come as it came to me.

Hey Debs - would you believe I felt like you when I first found out Alan T was publised. Its like being world famous and on the telly all the time isn't enough for some people. And unlike you I do resent him desperately for blocking someone elses chance at making a living from writing. Someone who doesn't have a healthy career as a TV celebrity already. So Rant on I say.

Oh, Debs - big virtual hugs. Remember the old adage - it's never too late while you're still breathing. And to really wind up the non-believers, did you know that early next year Neptune moves into Pisces which it only does every hundred or more years so - according to the Cainer-type people, Pisceans will find themselves in their element at last...
Susiex

Thanks for the virtual support, lovely people - my day will come - um... right? x