Marital Advice? (Peter Davidson has made some notes!)

It's easy to get comfortable with our reading and stick to what we know. And I say this staring at a shelf filled with thrillers (not all of them my own...), comedy material and books about the craft of writing. The world - and the internet we tend to see it through - is a big  and interesting place though, and if you turn off your literary sat-nav you can sometimes find a gem.

Recently, a US author, Peter Davidson, contacted me about a book he thought I'd appreciate. Turns out he was right. Marital Advice to my Grandson, Joel would not have appeared on my radar but I'm glad it has. It combines observational humour with personal anecdotes and has a ring of truth about it, not least because Peter genuinely wrote this book for his grandson, who in turn genuinely got married to Abby (see photo below).

Peter's book doesn't take itself too seriously, but it has a lot to say about man's evolution, and why it would be a great idea!

Marital Advice to my Grandson, Joel
By Peter Davidson 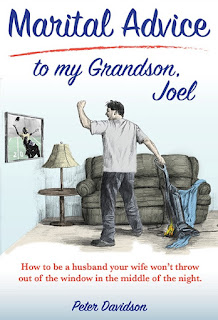 When Peter Davidson's grandson, Joel, got engaged, Davidson decided to jot down a few words of marital wisdom for him, based on his vast experience as a husband. Davidson wrote and wrote and wrote until the “few words” became an epistle. Then he thought, why share this wisdom with only one person when he could share it with the whole world.  So, Davidson started a blog, listing new marital advice every week.  As the popularity of the blog grew, people suggested that the material should be turned into a book.  The result is Marital Advice to my Grandson, Joel.

The book reads like a long letter from a grandfather to his grandson, filled with homespun marital advice and philosophies, true stories, and large doses of humor. The reader will have the feeling of peeking over Davidson's shoulder as he pens his wisdom or of eavesdropping in on a conversation between grandfather and grandson.

Advice to grandson Joel, and to any man, includes: make sure that you buy a roll of electrical tape before you volunteer to do the vacuuming, and why, how to deal with your wife's steely-eyed, clinched-jaw scowl, known as “The Look,” the warning that your mouth will get you into a whole lot more trouble than your Willy ever will, and how to create the world's most powerful anniversary card for your wife.

Virtually all of the material in the book is presented in the form of upbeat stories, scenarios, and examples.  This is definitely not the type of advice that you'll find in a textbook on marriage or in a book on marital relations written by some psychiatrist.  This is the real stuff for real people.

The book is available at amazon.com, barnseandnoble.com and at book stores.

And just to prove there was - and is - a happy couple, here's that wedding photo I promised. 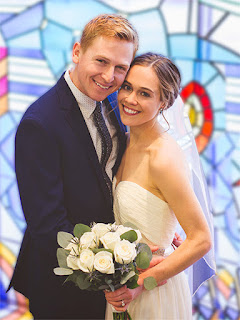 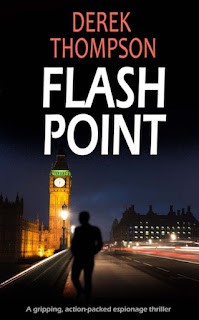