After our last, excellent post, about what can happen once a book is out there in the wild, my thoughts turned to one of my novels that's still on the starting blocks. It's completed (pending further edits, anyway!), but the feedback has been...well...interesting.

I describe Scars & Stripes as a transatlantic comedy drama. It's set in the late 1980s and follows 20 year-old Alex's efforts to create a new life for himself after his relationship ends. It used to be more 'gaggy', but the good folks in the Penzance Writers' group and the Famous Five writers' group (it's a long story) felt that the dramatic elements were being overshadowed.

And then one evening, after I'd read out an excerpt, Sue Louineau, author of Chapel in the Woods, remarked that for a comedic novel there were some surprisingly heavy themes and experiences in there.

Love, betrayal, sex, friendship, delusion, firearms, a car accident, death, loss, acceptance, mental illness and sexual politics - all are key elements in Alex's journey from Pierrot to hero. And although, when recalling the actual events that some of Alex's adventures were inspired by, I've tended to play up the irony and the humour, while playing down the pathos, there are rich, shadowy veins of serious drama running throughout the book.

All of which, takes me neatly, if tangentially, to Woody Allen. I watched the excellent two-part documentary on BBC4 recently about Woody, his work and his life. A few things became clear:
- He is rarely satisfied with the end result.
- He often has a completely different intention for the film than the meaning derived by the critics and the audience.
- He is largely unmoved by praise or criticism.
- He finishes one film and then moves on to the next one.

Ah yes, I can hear you mutter, but he can afford to. Well, that's certainly true, but can other writers afford not to? I don't know whether Scars & Stripes will make the transition from submission to publication through the conventional route. However, I do know that, while doing some fine sanding here and there, I need to also move on to the next project. Maybe that's the true message of 'Art for art's sake' - from a writer's perspective? The story works its way through you and then you make yourself available to the next one.

So how does any of the above inform my understanding of my own work? Well, apart from recognising a possible study in character armour, it tells me that my pitch to an agent, editor or reader needs to acknowledge some of Sue's perceptions. In the end, it's less about how I see my work and more about how the reader sees it. After all, they'll be the ones who decide if it 'works' for them.

'TheTime Hunters' author Carl Ashmore asks: Dear Harper Collins, can I have my series back, please?

In September 2010, I was invited by the Strictly Writing team to write about my experiences on the Harper Collins writers website ‘Authonomy’. I had gained a gold star for my children’s book ‘The Time Hunters’, and a highly positive review from a Harper Collins editor. Here is a passage from that review:

'I really enjoyed reading THE TIME HUNTERS. You start off the action with a bang, drawing the reader in right away. Your writing is strong, and in places has a classic feel.... It has terrific potential.'

In October 2010, I decided to independently publish ‘The Time Hunters’ and made it available as print and eBook. Pretty quickly, the book gained a number of very positive reviews and began to sell well, generating a solid and loyal fan base. Since then, the book has gained 128 five star reviews across Amazon.co.uk and .com and sold twenty thousand plus copies. I have also published two sequels, ‘The Time Hunters and the Box of Eternity’ and ‘The Time Hunters and the Spear of Fate’ and they have sold equally well and maintained the same level of acclaim. I have also sold the foreign rights to a Brazilian major publisher, Bertrand Brasil, and ‘The Time Hunters’ is due to be published in that territory at some point in 2013.

To sum up the plot, ‘The Time Hunters’ is about a young girl, Becky, and her brother, Joe, who, along with their time-travelling uncle and Will Scarlet, embark on a series of fast-paced adventures in a treasure hunt for powerful ancient relics.

Anyway, this month saw the publication of a new children’s series by Harper Collins. It’s called (I’m sure you can see where this is going) ‘Time Hunters’. And the plot – well, it’s about a boy and girl who embark on a series of fast-paced adventures in a treasure hunt through time for powerful ancient relics. Now, in many ways, that is where the similarities appear to end, but they don’t. In Book 5 of their Time Hunters they encounter ‘Blackbeard’ (I meet him in ‘The Time Hunters and the Box of Eternity’ (2011)).  In Book 4 of their series, they visit Ancient Greece, I do it in ‘The Time Hunters’ (2010). In Book 6 of their series they visit Ancient Egypt and battle mummies, I do that in ‘The Time Hunters and the Spear of Fate’ (2013).

I know full well you cannot copyright a title or idea, but this seems more than that. My series has been exceedingly visible across the Internet since 2010, so why on earth would anyone publish a new series under the same name, particularly when the general premise, some storylines and target audience are identical?

Like many writers, when preparing a new book, I spend countless hours considering titles, trying to find the most suitable one to reflect the tone, storyline, target audience and genre of the book. Upon crafting a list of candidates, I’ll Google what already exists. This is where I’m incensed by the actions of Harper Collins. ‘The Time Hunters’ (yeah, I know they dropped the ‘The’) is extremely visible whichever search engine you use. I also understand that some titles are common and will have multiple books attached to them. As an experiment, I Googled the term ‘Killing Time’ and found there were over twenty books from different authors with that title on Amazon alone. However, ‘The Time Hunters’ is a much less generic title. Plus, it is indelibly linked with an established and popular series that already exists … my series. 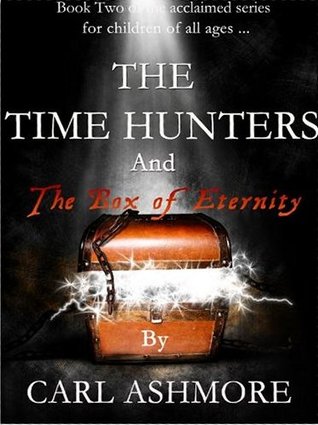 Furthermore, my frustrations are compounded by the fact the new ‘Time Hunters’ is published by Harper Collins - the very same company who said my book had ‘terrific potential.’

I have contacted the author and she (Chris Baker is a pseudonym) has pointed out she was working for a book packaging company, Hothouse Fiction, and that the name, concept, copyright etc. all belong to Harper Collins and Hothouse. She said she was merely a ‘hired pen’, that this kind of thing ‘no doubt happens a lot’ and I must find it ‘frustrating’. Well, in truth, there are other ‘f’ words I could use to more accurately describe my feelings about this.

And, in this case, I’m not sure this situation does happen as often as she suggests. As I said earlier, this is not merely the duplication of a title, or the similarity of the concept, this is a combination of the two that damages a brand (I hate that term) I have worked on since 2005. Clearly, if I approached another major publisher and pitched them a children’s time travel series about a boy and a girl that travel through time on a treasure hunt, then surely their response would be  ‘Well, hang on, Carl, a series like yours already exists and is published by Harper Collins.’

Let me just say I bear no ill feelings toward the author of the new TH series, whatsoever. She seems very personable and is just a writer trying to eke an income in a difficult publishing world. And I wholeheartedly believe her when she says she hasn’t seen my work. However, someone would have seen it, they had to have seen it - someone at Hothouse or at Harper Collins - and they still pressed ahead with their ‘Time Hunters’ series.

I’m just the little guy and they’re a major corporation. I write from my kitchen in a terraced house in Crewe, my four-year old daughter doing everything she can to stop me writing a word, whilst the people that have created this situation probably swan around Soho quaffing goblets of Viognier. The two stories are probably different enough for them to argue there has been no plagiarism, but I can’t deny this situation smarts, somewhat - no, as a matter of fact, it stinks…

Furthermore, as using the same title and concept of an existing series is clearly not an issue, then the next time I write a children’s series I’ll make sure it’s about young wizards and call it ‘Harry Potter’. No better still, I’ll call it ‘Ziggy Waggabobble and the Mosphorous Flagdulaters’, a story about heroin-addicted frogs that pepper their conversations with swear words. Let’s see if the Viognier quaffers want to nick that, too …

If you have any thoughts then my email is carlashmore@mailcity.com

How not to be a pain in the arse author