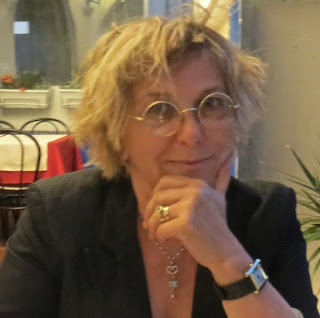 It all began in Cornwall. This is where the landscape for the Septimus Heap series was born and where Angie Sage at last got the chance to switch from illustrating books to writing them.
Although you will find the Septimus Heap novels in the nine to twelve years old section of the bookshop, they were written for, and are read and appreciated by, all ages. The books are fast paced, exciting tales of adventure full of interesting people and many layered relationships. They take place in a fictional world, which has enough similarities to our own to resonate, and enough differences to intrigue and entertain.
MAGYK, Angie’s first book in the series, went to number one on the bestseller lists in New York and London. “It was such a buzz, getting that phone call from my publisher.” Her other long running series, Araminta Spook, which is for younger children, reached the top ten of the children’s bestsellers.
Angie grew up in the south of England.  Straight out of school, she trained as a radiographer with a view to getting into medical school, but when that actually happened life had other plans.  A few years later she went to art school, knowing that she wanted to be part of making beautiful books.
“After art school I got an agent and became a jobbing illustrator,” Angie says. “I did Ladybird books and toddler books, but I was pretty sure I could write too. So eventually I wrote my first book—a very simple story for under fives in rhyming couplets—and sent it in as a dummy book. After six months they said they were still looking at it. Six months later they told me, yes, it’s still here. I imagined it in a dusty corner, lonely and ignored. I waited yet another six months and with a heavy heart I phoned them up and asked them to send it back to me. The next day I got a call from the editor, who told me, ‘I was just walking down the corridor to put your book in the post when I realized that I don’t want to send it back to you.’ And that was that. They took it, and on the strength of that I got a literary agent.”
Angie balanced life raising her two daughters with illustrating, and writing a few early reader books. But, as with the pictures, she always felt that the early reader books weren’t quite what she wanted to write. Then the illustration work began to tail off. “I was actually without work for six weeks, and I thought, well, I can’t go on any longer than three months but I’m going to use this time to get into the atmosphere of something. I really thought that at the end of it I would have to go back to being a radiographer. I was actually making enquiries about refresher course,” she says with a shudder. “But I had this scene that was haunting me, where someone finds a baby in the snow, so that’s where it started. At the end of three months I had the first eight chapters, and on the basis of those my agent got me a publisher.”
And so began the Septimus Heap series, a three book deal that went to five books and then, as the Septimus world expanded, to seven. “The characters just kept arriving, and their lives just kept growing. When people ask me about them, I talk about them as though they’re real because they feel real. I think it’s the characters that sustain the series.” The series continued with the TodHunter Moon trilogy but the publication of book three, StarChaser, in October, will be the last of Septimus Heap—apart from a few follow-up novellas for diehard fans.
Angie left Cornwall in 2007 to move to a very old house in Somerset where she and husband Rhodri discovered a huge wall-painting of Henry VIII, which at times rather took over their life. It’s a house that would not be out of place in Septimus Heap, but it is also a demanding creature that can make it hard to concentrate on writing.
Angie is disciplined in her approach, and works a full working day. “I tend to work until the Archers comes on. If I’m into a book I will have a schedule with a word count, usually a thousand words a day, and if I’ve not done five thousand words in the week, I’ll need to catch up on the weekend. And then there is all the other stuff too: emails, letters, keeping up with Septimus fans and even at times, just finding time to think about new things, which sometimes gets lost but is, of course, the most important thing of all.”


Angie is now lead author on a project that is a departure from her normal way of working in that it involves planning five books in a series story arc but writing only the first one and handing the rest over to other writers. “It’s an interesting and different way of working,” she says, “and I’m learning a lot.” She also has a new series in mind and a standalone YA (Young Adult) novel waiting for the go-ahead.
A writer’s life is about so much more than just the writing. Angie is planning to move to a less demanding house and hoping to get out on the water a lot more, but she has a sneaking feeling that writing is going to be a huge part of her life for some time to come. In March 2016 she will attend The Writing Retreat in Cornwall as a visiting author, talking to the guests and sharing writing tips with them. She’s looking forward to being back in Cornwall, and in such a magical location.
Posted by DT at 08:28 4 comments: