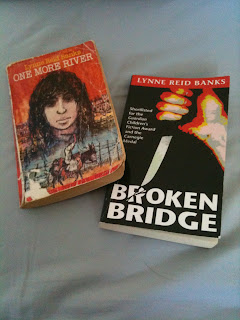 One of my favourite young adult books is One More River written by the supremely talented and prolific author Lynne Reid Banks. I recall reading it when I was around twelve years old and it left a lasting impression on me. I often wonder do we get the same 'buzz' when we re-read old childhood classics. I decided recently to cast my eye over this fabulous book again and I can honestly say I was not let down.

This novel follows Canadian teenager Lesley who enjoys a luxurious way of life in her home city of Saskatoon. However this idyllic life is soon to change when her father decides to relocate the family to Israel, a move which would allow them to fully embrace their Jewishness. Lesley is initially distraught at this snap decision and starts to rebel against her family. However once settled in the Israeli kibbutz, she begins to find this frugal and very basic way of life quite tolerable. The teeanger soon strikes up a relationship with a Palestinian boy called Mustafa, who lives on the other side of the River Jordan with his family and his donkey which Lesley calls Eeyore.

The book is set during and after the 1967 Six Day War which provides an educational backdrop. The war began on June 5, 1967 and ended on June 10. The conflict was between Israel and Egypt, Jordan, and Syria. The book has enjoyed great critical acclaim. While many modern books for young people focus on issues such as supernatural forces, heroes and villains (like Harry Potter), One More River contains three dimensional characters with whom we can identify. It’s a book which really should be included in a school syllabus as it provides so much more than a story about a girl settling into a new life in Israel. It can be used to develop discussion of today’s problems in the Middle East and enhance understanding of other world religious and political conflicts.

Lynne Reid Banks is the author of over forty books. She was born in London, and subsequently evacuated to Saskatoon in the Province of Saskatchewan, Canada during World War. In 1962 she emigrated to Israel and found a job teaching on a kibbutz. She uses her experience of kibbutz life in many of her books and if children enjoy One More River, they should be encouraged to read other books in her catalogue.

The book is aimed at readers aged ten to thirteen, but the mass appeal of One More River lies in the fact it can be read by young adults of any age. It is a truly engaging book and one which will teach children about history as well as relationships across political and religious divides. I recently read the follow-up Broken Bridge which was shortlisted for the Guardian Children’s Fiction award and the Carnegie Medal. It is set twenty-five years later and follows the lives of Lesley’s children, nieces and nephews in Israel - highly recommended if you want to encourage a teenager to develop good reading habits.
Posted by Gillian McDade at 06:00

I'm so glad to have been reminded of this book. I loved it (and other Lynn Reid Banks novels) when I was young. I'm going to look for it to try on my daughter, who is something of a reluctant reader and needs a blazing story to get her hooked. This from what I remember, is one of those. Thank you for the review.

The L-Shaped Room by Lynn Reid Banks left a lasting impression on me as a teenager, and I'd love to re-read it and see if it's stood the test of time. None of her other books appealed to me, I don't know why, but one of my teens is a big fan.

I was talking about this book with my daughter only a couple of weeks ago; I don't know where our/her copy is now, but I do know that re-reading one of the other four or so adult novels I have of hers decades later was a rare pleasure for the impressive quality of the writing. Thank you for this.

I think that sounds great, Gillian, so thanks for a really good review. Have to slightly jump about in my seat though at implication that most modern YA is a bit shallow! I think some of the most exciting, vibrant and beautiful writing around right now is YA and not adult personally...

I must add Lynn's other books to my reading list. I'm
ashamed to say I've not read many!

The shallow books I refer to are a mere handful read by the masses!

Thanks for this Gillian. I love Reid Banks's writing and haven't read this, but am always on the look out for interesting books for my children. Will definitely put this on the list.
L-shaped room is a stunning book too.

Karen, I'm right with you on The L-Shaped Room - in fact I named my first car Toby after one of the characters in it! I loved it SO much and like you, it left an impression. Did you read the sequel, 'Two is Lonely'?
I also really enjoyed Lynne's book about the Bronte family, 'Dark Quartet' and am sure I should read some of her other books too now I've been reminded.