On Dishwashers And Writing Houses 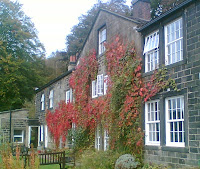 Rachel Connor works for the Arvon Foundation at Lumb Bank, former home of the ex-Poet Laureate, Ted Hughes. Along with her colleagues, she hosts groups of writers who come to stay at the writing centre most weeks of the year. She never tires of the view. You can read more about Rachel, her work for Arvon and her forthcoming novel ‘Sisterwives’ on her website at http://www.rachelconnorwriter.com/
Monday morning; there’s the thrum of a lawnmower outside on the lower terrace, the hum of a vacuum cleaner from the landing above. The house is in waiting, being prepared for the sixteen writers and two tutors who will comprise this week’s participants. ‘Arvon has been running these courses for forty three years,’ we tell people in the welcome talk. ‘This week it’s your turn.’
What amazes me every week is how readily most groups grow into their ‘turn’ and claim ownership – not just the physical space of the house itself but a growing into the rhythm of the week. It’s that feeling of wanting to ‘make the most’ of the place, the time, the opportunity to write. Because, let’s face it, it can be a big thing to set aside a week to go away and write, to leave behind families, partners, work and the demands of everyday life. Some make new friends; all go away changed in some way. Some realise that they are writers, when they’ve grappled for years with what that means; others might learn something difficult, fundamental – even unwelcome - about their work. All of these things mean that the writer will grow.
The reason Arvon works is simple: the system works to create not just a writing course, but a place where people come together as a community of writers. It was there right from the beginning, forty three years ago, and is still a keystone of the way the courses run now. As well as attending workshops together, everyone eats around a big table; participants are put into groups for cooking and washing up. By the end of the first evening – the first meal and wash up, the ‘get to know you’ writing session – the bonding is already beginning to happen.
Of course, washing up (or even cooking, for that matter) isn’t to everyone’s liking; there are inevitable grumbles about the lack of dishwasher. But none of this is new. In Lumb Bank’s kitchen we have a framed poem, written in the 1990s, ‘On Lumb Bank Not Having a Dishwasher.’ By the end of the poem, the poet’s initial dismay has been dispelled. It’s deliberate, she realises, because it makes you stop, and look, and think.
And then there are the workshops. As a member of staff at the centre, working in the background, putting away shopping or preparing the lunch, it’s easy to feel like Cinderella. There are the gales of laughter from the dining room, where the group is writing. There are the tantalising snippets of work being read aloud, evidence – afterwards – of an exercise designed to generate and stimulate. Sometimes there are fragments of poems pinned to the walls. More than once I’ve found myself wondering if we might invest in a baby monitor, for the purposes of listening in while I’m making salad.
One of the remarkable things about my job is being witness to countless small but significant moments in people’s writing lives. It might be in the sitting room on a Monday, after everyone has arrived, when a participant realises – perhaps for the first time in their life - they don’t have to explain their motivation for writing. It might be seeing a nervous student waiting outside a closed door before their one to one tutorial with a tutor. They clutch notebooks to chest, faces almost white with anticipation. Then they emerge, butterfly-like, lighter, validated, understood.
For me, the most rewarding weeks are those we run with young people. We might have inner city kids – with little or no experience of the countryside – arriving into the space and green of the valley. They marvel at the ‘wildlife’ and the view. Within minutes they’ve found the piano. Their concentration is tested; they learn new kitchen skills, how to chop an onion. They eat food they never thought they’d try. And writing...with the guidance of two tutors who are chosen for their humour, compassion and sensitivity, these schoolchildren gently open up, petals turned towards light. ‘Miss,’ they say, coming into the kitchen during a coffee break. ‘I’ve wrote a poem, miss, do you want to hear it?’
How could there be any other answer than yes?
Posted by Fionnuala at 06:00

Makes me want to go there! Thanks for stopping by Rachel and best of luck with the novel!

Oh my goodness, these course sound fab...and I say that as a writer completely adverse to the whole creative writing industry.
HB x

Thanks, Rachel. As you know, I am a Lumb Bank addict: about to turn up for my third time in less than a year. It is a magical place and you do an amazing job in creating a perfect environment for writing. Please come back and write us something about you and your novel when it comes out.

Rachel, it sounds wonderful. Arvon has been sitting in the corner of my mind for years now. Maybe soon.
Your post sent me to your website and I got very involved - it's fab. Would you mind very much saying who designed it?
Thanks for visiting Strictly, and very best of luck with Sisterwives.
Susiex

Fionnnuala and Helen: You should definitely save up/find the time to go. It can be a wonderful experience. Come to Lumb!
Rod: kind words, many thanks. And I'd love to write another post when my novel comes out.
And Susie, thanks for your words too. Hope to see you at Lumb some day. Thanks for your words about my site. I love the design too.Very happy to say who did it - a wonderful woman named Jan Scott Nelson - you can google her, but if you email me (address on my site) I can pass on more details if you like!

Thank you, Rachel. I've just browsed her website - some lovely sites there - and emailed her. Very much appreciated.
Susiex

Goodness, me, am welling up here! Lovely post, Rachel. I'm off on my own third Arvon idyll very soon! Can't wait. (There is a dishwasher at Craven Arms, though!)

Oh what a wonderful post!! Makes me feel very nostalgic for my Arvon course I took last year. I went to Moniack Mhor, not Lumb Bank, but it is exactly as you described, Rachel - the feeling of being among peers is such a validating experience. I came away with so much more than what I arrived with. I even made a very good friend, who I still meet with to discuss our novels and writing progress. It was such an enriching experience and I hope so much to do it again one day. Lumb Bank looks magical, and a bit closer to home ;)

Geraldine: glad you liked the post, thank you. I think we may well be the only centre without a dishwasher but we stick steadfastly to the fact that it fosters group bonding (and otherwise, to be honest, no-one woudl emtpy it!).
Green ink: your experience sounds v similar to my own (which was at Lumb, 7 years ago); I too made strong friendships, which last and last. Do come and see us at Lumb!

It does sound very appealing, I've never met anyone who has been. Perhaps I should think about applying as a tutor. Hmmm.