The Pram in the Head 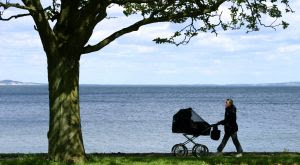 There’s a pram in my head and it must come out.

When my twins were born, I had no time or energy to write. But the day they started school I sprinted home to my desk and haven’t stopped writing since. That was two years ago. All I have to show is a couple of published stories and a dreadful draft of a novel. What happened?

I’d heard Cyril Connolly’s warning: ‘There is no more sombre enemy to good art than the pram in the hall,’ but I mistrusted a decree from someone I doubt changed a nappy in his life. Anyway, he’d missed the point. Motherhood brought a creative license to make mud slides into rivers, dig clay from ponds for finger pots, build skyward ski jumps and all pile onto the sledge to test them, keep snails as pets, make vinegar and bicarb volcanoes– the list is endless and beguiling. Admittedly play doesn’t transform anyone into a good author, but it does demand sensory experimentation and tireless curiosity. Good traits for a writer. And though play makes irresistible calls on one’s time, it’s time that would be spent with children anyway. Then there’s the freshness children bring to language: ‘We run through muddy darks!’ my toddler announced when plunged from the brightness of a meadow to the sudden shadow of the woods. How could such a fertile time have diminished not strengthened my writing?

I thought at first it was rustiness, that practise would free it. It didn’t. I needed feedback then. Joining critical forums just proved the work was mundane but not how to fix it. Then one day a spritely woman from church approached me for the title of an anthology I had work in. She wanted to recommend it to her book group. I couldn’t believe how loudly, ‘Nooooooooooooo’ rang inside my head as I feigned an emergency and scarpered. The idea of anyone in the village reading what I used to write had me up all night. What would they say about that prisoner losing control of his bowels? Or those sexual fantasies of an underage teenage girl? They must never read that work. It was uncensored. The problem had come to light.

I’d  spent five years programming myself away from the writer’s instinctive role of impartial social observer to that of Pillar of Suburban Morality. Joyce Grenfell had nothing on me. Five years of, ‘Don’t slurp your milk! Don’t prod the cat! Pull your pants up! You know we never say that!’ had quite simply whipped my voice into submission. I now type with a straighter spine (sit up at table!) and there’s no longer rolling tobacco between the keys (a good thing, alas) but the words are as sterile as a bottle teat. My writing wasn’t particularly salacious or explicit, but it was direct, and now it’s sanitized. Or was, until recently. For me, the antidote was to return to basics. I picked up my dog-eared Natalie Goldberg, whose Zen-babbling enthusiasm I’d long scorned in favour of more stringent tutors. I read her in the bath and in bed and at dawn. I applied her rules (don’t think, don’t stop.) The pram is freewheeling downhill.

Inspirational! Thank you, Susannah. Let's rip off the constraints, take the roof down, get in the pram and drive it over a cliff.

I bags being Susan Sarandon. You can be Geena Wassername - the pretty one.

Glad it made sense to you Rodders. I read it this morning and thought: Eh?

Great blog, Susannah. You highlighted exactly the pros and cons of motherhood, what it brings to the creative process but also what it can take away: the tyranny of self-censorship. Here's hoping the pram has a happy landing.

Susannah, your post has brought tears to my eyes! I'm sure you'll go really far in your writing. You write like a dream!

I so identified with this, Susannah - thank you. It wasn't till my kids were teenagers that I felt able to write anything with more than a chaste kiss in it. And even then I still felt inhibited by the thought of my mum reading the 'naughty' words. When she did, though - I'm delighted to say she loved it all - or at least, she said she did (bless her).

What a beautifully written post, Susannah. It was having children that spurred me on to write. I think it was partly a need to have something just for myself. I still feel like that. But as I write for children, I test stuff out on my two, which is very satisfying.

Brian, your comment is huge, actually. I think you are right. There is another identity. It almost needs a separate space (hence my envy of Rod's cedar sanctuary.) You step away from normal world and put on the mental mantle of writer. It sounds noncey, but it works better that way. I know of people who mistrust authors with pen names, but pen names make sense to me. We are not necessarily at all the same in our work as we are in our daily life.

I agree that having kids really brings out one's creative side that perhaps has been suffocated by adulthood and is just waiting to be unleashed again. It reminds us how to put what's in our head onto paper by drawing or writing, or how to create it from cardboard and glue - and that it doesn't matter if it's not perfect or if not everyone likes it.

I'm not sure how i would have coped with trying to write when they were babies though!

Enjoyed this post, Susannah! Now I need a pram.....

I'm not sure that having children brought out my creative side in the obvious paint-hurling sense, but it did make me re-examine just about everything I ever thought about anything, because I had to think about what I was transmitting. In that sense, before I had children I didn't actually have anything to write about.

As to self-censoring, I'm afraid it didn't occur to me. Which is maybe why my teenage son refuses to read my fiction: there's plenty of stuff in there you really, really don't want to think about your mother knowing. On the other hand, he's a demon salesman of my work to all his friends...

Oh, and both the children agree that having a writer for a mother is seriously cool, even if they haven't read the books. So put that in your pipe, Cyril, and smoke it.

Sam, I love your comment about children reminding us to put what's in our head onto paper. Beautifully put, and yes, isn't that just baout the best thing about being a mother as well as a writer.

Emma, how lovely that it didn't occur to you to self censor. It didn't occur to me that I would, but then the kind of mother one is, is largely dependent on the kind of mother one had, and given that mine was lax (in a lovely, gentle way) to the point of constantly forgetting she had us, I am prone to conscious moral rectitude which slipped into the work. Not a pretty thing in a writer, unless it's one's natural voice to begin with.

Hope I am that cool writer-mother one day...

Beautiful post, Susannah. Puts me in mind of Picasso saying that one has to return to painting like a child - your toddler's line about 'the muddy dark' was so spot on.

Did Picasso say that? What a deeply intelligent man he was.

Susie, my artist great-aunt, Gwen Raverat, in old age said that it took the whole of a lifetime to learn "to see with the eye of the mind, not gaining experience, but losing it", which is much the same as the Picasso remark, I think.

The 'muddy dark' is fab. My daughter once said something as arresting, but I'm not going to tell you what it is because I'm saving it up for a story...

Thank you for this post. Feel that I have been in the muddy darks myself as far as fiction writing is concerned. Now, perhaps, some light at the end of the shadow.

Hey, yes Allison, they were muddy darks. At em with a shovel.

What an interesting article Susannah. I am so glad to hear you have discovered what was holding you back. I haven't censored myself, and now find I sometimes wish I had used a pen name - the playground mums have started to google me and are sometimes startled by what they find.

I do find the greatest problem I have with writing/parenting/the whole being a woman with a family thing is the stop/start path I am forced to follow. I take time to get in a rhythm of words, and then it's another school holiday and my twins are home and we are busy. Then when they return to school and I get the longed for time and space to write I am out of my groove and it can take weeks to recapture by which time they are off again. Ho hum.

Sara you have twins too? Have we had this conversation before? That's you, Jem, Helen and me on Strictly alone. (Sam, watch out. They'll be heading your way next!)

I am really Glad i came across this website.Added strictlywriting.blogspot.com to my bookmark!