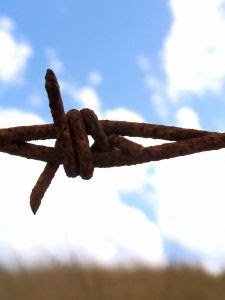 It’s a humbling experience for a writer to discover words written by people in extremis. People without recourse to what we take for granted – pen, paper, food, freedom – who nonetheless are compelled to write, even when the act of doing so is a punishable offence which must be kept hidden at all costs.

Until recently I was in the habit of complaining quietly to myself when the light wasn’t right in my office, or if my favourite brand of notebook wasn’t immediately to hand. ‘How can I write under these conditions?’ was doubtless prompted by an unconscious desire to avoid work on that particular day. Then I discovered a series of diaries written by men and women interned by occupying forces during the Second World War, a period of time when my grandparents and mother were prisoners of the Japanese, suffering captivity for nearly four years.

Finding this writing was a revelation, not least because it demonstrated that the imperative to write is not the reserve of writers but can strike anyone with an urgent sense that they have a story to tell, words which must be heard and should not be forgotten.

In one instance, the writing I discovered was nothing more than signatures. Dozens and dozens of signatures. The names of every woman and child in the prison camp, written on a tea-towel and embroidered into place, the dates of internment stitched at the top. To see my grandmother’s handwriting as part of that testament was extraordinarily affecting. I wanted to abandon all other writing projects and focus on finding out everything I could about her experience. Did she know she was signing her name as such an astounding testament? Did she believe she’d survive to tell her story to grandchildren and great-grandchildren? How was she feeling at the precise moment when she wrote her name on the cloth, and her child’s name?

Some of the words written by internees have been preserved in museums (the tea-towel is part of an archive held by National Museums Scotland) but these stories deserve to be resonating right now. People risked their lives to record these details. The accounts are alive with colours, scents, tastes. You couldn’t hope for better examples of the old maxim ‘show, don’t tell’: unsentimental even inconsequential chatter that takes you right under the skin of the authors, directly into their lives.

On scraps of paper or cloth, concealed under stones, in the hems of skirts and under floorboards – these diaries survived thanks to the ingenuity of their authors. To read them is a privilege, and a responsibility. You feel the weight of the words, and want to add your own. This is inspiration at a gut-level, life-changing. It’s altered the way I feel as a daughter and grand-daughter, and the way I feel as a writer.

It’s exciting and daunting to take custody of family history in this way. I hope I can do justice to it.

Sarah is an award-winning writer whose fiction appears in Smokelong Quarterly, The Fish Anthology 2008, Prick of the Spindle, The Best of Every Day Fiction, and in the Crime Writers’ Association anthology, MO: Crimes of Practice. Sarah blogs here.
Posted by Administrator at 06:00

What a beautiful posting. It reminds us that good writing can be immediate and relevant, whatever the context. It's also a powerful lens to view our own work and writing practice through. Thank you.

What a great post.
I think passing sories down, be they written or word of mouth is a hugely important part of family life and ensures each successive generation is still linked with the tribulations and triumphs of the past.
HB x

A beautiful and very moving post. Thank you, Sarah.

Thanks, everyone. I'm glad to have you reading.

It certainly made me think, Sarah. I never had any relatives affected in the way yours were but I still feel sadness at the cruelty of the world and what was allowed to happen then.

I shall no longer be complaining about slow or no responses from editors and I think my writing space is fine now when you think about all this trivia in relation to the hardship people went through in the war and they still wrote!

Wonderful post, Sarah - thank you.
Makes me think of what an amazing act writing is - saying, basically, 'in spite of everything, I am here'.

It's not the first time you've written about this, but you always manage to add something arresting. I think of hands embroidering the writing, using a woman's skill and age-old technique, to keep the names alive, making history.

A beautiful post, Sarah, makes me think of all the writing done during the Holocaust in the camps, and the art too, hidden under floorboards, the urge to write it down, for someone, somewhere to find it. Thank you for this.

Thanks again to everyone who read this and took the trouble to leave feedback. I'm so glad that it touched so many of you.

This is a wonderful story and a very moving post. I like that it embraces and reminds us of what is REAL, something which is ironically often missing from our daily lives, where we may spin philosophical ruminations and ramblings and fluffy clutter, often endlessly, for ourselves. It simply IS. The names were enough. "I am." Embroidery on cloth. Cuts through the clutter and is deeply affecting. It all comes back to stories, and these are the kind we need and can draw from. And from which we can learn. And it makes me deeply ashamed for bitching about something as mundane as a lamp or a pen. Thanks for the wonderful post!

Thank you, Karen and Caroline. Karen, yes! It shows that the truth does not need to be elaborate, can be simple - its power comes from the fact that it is true.

Wonderful post and many wonderful comments - it's so reassuring that enthusiasm for this history hasn't been lost.