It’s the Journey not the Destination - Carol Browne 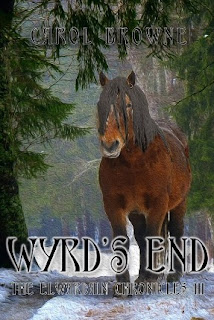 On 3rd May, 2020, the project of a lifetime was completed at last. My epic fantasy trilogy The Elwardain Chronicles was published in its entirety. When I wrote Book I in 1977, I had no idea I was committing myself to many years of hard work, stress, and disappointment, and a good thing too or I might never have made the attempt. Whether or not it is worthwhile as a work of fiction is not for me to say. There were countless times when I agonised over giving up or carrying on, and there’s no way I can be objective about the end result, but part of me knew I would find no peace of mind if I didn’t persevere. It is only now in retrospect that I can see the real value of what I did.
The trilogy was my teacher! I have perseverance in spades now. I discovered strengths I didn’t know I possessed, whereas before I saw only my weaknesses. I was forced to learn how to use a computer in my fifth decade and to do this largely on my own, not to mention provide myself with the necessary hardware and software on a very small income. It made me very resourceful. I started as a complete technophobe and now have a desktop, a laptop and a smartphone.
In the early days I watched YouTube videos to learn how to use Word, one of those tools of the trade vital to writers. I worked with editors and other authors and they helped me become a better writer. I took a proofreading and copy-editing course and set up my own business. I learned many things about the publishing industry, about submission procedures, book signings, promotion, and marketing, and became active on social media. My horizons expanded tremendously as I encountered people from all over the world and many became my friends. I wrote four more books, two of which are published, and I started blogging.
I learned how to fail and start again, how to bounce back. Publishers came and went.  Years of rejection slips taught me resilience and patience. Authors, publishers and readers showed me just how generous people can be with their time and support. And apart from the realisation that I do have talent and am worthy, I learned that the value of a thing is not measured in terms of financial gain but in the contribution it makes to the world. The enjoyment my readers profess to have found in my books is a reward more desirable than money for all those hours at the keyboard, struggling with self-doubt. It is a great feeling being able to entertain people!
My trilogy made great demands upon me but without it what would I have been? It made me step out of my comfort zone. It brought me out of my shell. It forced me to develop new skills. Odd looking back now how much my characters grew as people as their stories progressed along with my own. How much we grow towards self-knowledge as we travel the path of life is the true measure of our success as human beings. We might not realise our full potential but we owe it to ourselves to try.
A journey of a thousand miles begins with a single step, and every step after that is an opportunity to learn something new.
Carol 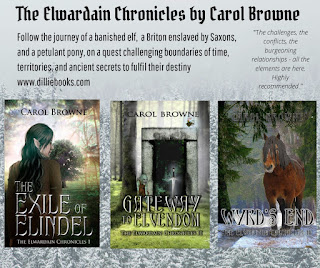 Author bio
Born in Stafford in the UK, Carol was raised in Crewe, Cheshire, which she thinks of as her home town. Interested in reading and writing at an early age, Carol pursued her passions at Nottingham University and was awarded an honours degree in English Language and Literature. However, fated to lose everything and start again several times, it is only in later life that she has realised her dream of becoming a published author. Writing fiction and non-fiction, and now a contracted author with Dilliebooks, she lives deep in the Cambridgeshire countryside with her cockatiel Sparky and uses words to weave tales like tapestries that she hopes will adorn the walls of your imagination. Her watchword is perseverance.
https://www.facebook.com/AuthorCarolBrowne
https://twitter.com/@CarolABrowne
http://authorcarolbrowne.wordpress.com/
https://www.facebook.com/Proofreading-by-the-Wordsmith-1494553080872032/
https://www.instagram.com/carolbrowneauthor/