Even if you don't believe in destiny you probably accept the word of Sir Isaac Newton. His 'three laws', unlike Isaac Asimov's (now that's what I call a literary reference), underpin not only our understanding of physics, but also of daily life and writing.

Simply put, in fiction something has to happen in order for something to change, whether the outcome is progressive or regressive. You could argue that every twist and turn in a novel is really a Newtonian force zinging into the protagonist from an unanticipated angle.

I'm more of a plotter than a pantser when it comes to putting together a story, but I welcome an unexpected inspiration that careers towards me and knocks a character out of the picture or into it. Shadow State, the fourth book in the Thomas Bladen 'Spy Chaser' series owes a debt to Newton. I thought I had the plot figured out and my characters were moving purposefully towards the checkpoints on my writing roadmap. (I know, it makes writing sounds really romantic, huh?)

And then...out the corner of my mind's eye, this speck of light, this flicker of 'what if' from the muse slammed into my carefully constructed plot. Okay, carefully might be overstating it a bit. But the result was surprising. A character did something unexpected and I had a choice of whether to run with it and see where it led, or to rein them in and remind them that it was my ball and therefore my rules. I went with Plan A, trusting the character I thought I'd created - we can debate that one on a chair and couch some other time - and ended up somewhere else. It was different to my original vision and I liked it. Writers like to be surprised. It keeps us on our toes and it's a great reminder that we are engaging with a fluid and mimetic imagination.

You could say that Shadow State is something of an experiment in places. It features many characters from the series and a couple of new ones. It redraws the map in places, as far as loyalties go, and it peels back the layers a little more of the characters we think we know. It plays with some of the conventions and, I hope, it adds something special to the canon.

If you're drawn to British spy thrillers that give a nod to Len Deighton, John le Carre, Raymond Chandler, and Harlan Coben, Shadow State might be just your cup of coffee. Intrigue, action, sardonic humour and swearing - what's not to like? 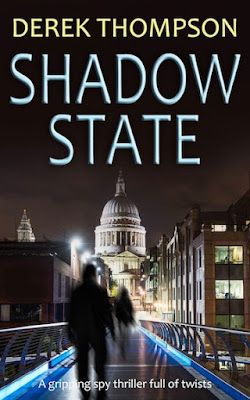 SHADOW STATE
Thomas Bladen thinks he is in control. He's wrong. When Thomas is confronted by a Shadow State operative, he is given a stark choice - expose a defector or face the consequences. But who is the real enemy? A stake out becomes a rescue, an intervention leads to murder and loyalties are stretched to breaking point. Soon Thomas is forced into a dangerous game, turning the Shadow State against itself.