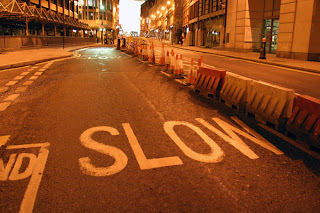 I was at a meeting recently with two heads of local arts’ departments, planning a literary festival. We’d spent two hours talking enthusiastically about our dream author lists.  As we got up to leave one of them said with feeling, ‘At least Michael Dibden’s dead, thank God, so I don’t have any more of his hanging over me.’
‘But,’ I said,  'moments ago you said he was your favourite author.’
‘Oh, he is,’ said the arts councillor. ‘But they pile up too fast these days, don’t they? They’re churning them out. All my favourite authors. They just won’t stop producing one a year and I can’t keep up.’
‘Exactly!’ said the other officer. ‘Why doesn’t someone tell them to slow down?’ And with that they headed off, bleary eyed, to buy a novel by our leading guest author this year who both of them had heard of but neither had yet managed to quite get round to.
I can’t argue with their grievance, can you? But I was shocked to hear such exasperation in the voices of the keenest readers and the injunction to slow down because they are buying faster than they can read.
When I signed with my agent the first thing she asked was how long the book had taken to write.  She hmmed at my answer and said I’d be expected to write one a year, that’s how the slots worked.
Slots?
Apparently publishers have slots for a certain number of books. If a big author chooses to take her time writing another, or is rich enough not to need to bang out the statutory one-a-year, her slot becomes vacant and a rookie can get a toe in the door that season. Fascinating stuff. But more fascinating to me was the heartfelt readers’ plea for authors to slow down and take the time their book needs to mature and be perfected. Speculating on nothing more than two avid readers crying for fewer books to come out per year is hardly scholarly research, but it struck a chord. I’d be interested to know across the board: if authors hanker after more time to develop a book, and readers can’t wade through their bedside piles fast enough – who gains in this?
Publishers may not care, short term, if readers are buying without reading, but this trend in overbuying may account for the sales drop off for second books. Mid-list authors are being shed because readers are slow to buy book two. As I would be if an author’s debut was still gathering dust under my alarm clock and cat, in the teetering tower of books ‘to be read soon-well-sometime-this-year-or-next. Sales dips may have nothing to do with reader enthusiasm for an author’s style, and more to do with the accelerated pace of author productivity.
My husband used to work at Manchester Waterstone’s in the golden days when Robert Topping was store manager and those italic notes recommending staff choices were genuinely that – not pre-paid sentences scripted by the publishers’ marketing department. Topping used to say, ‘Remember, we’re not selling shirts here.’
Twenty years on, the gap between selling books and shirts has closed. Authors are knocking out product apace and their line is cancelled if sales drop below a certain figure. There’s less career development; no long game. Publishers might make everyone happier by suggesting authors bring out a book every two or three years instead of sweat-shopping and perhaps the buying/reading bottleneck would ease off.
Posted by Susannah Rickards at 06:00

I think it might depend on your market. Certainly crime readers are voracious and if it's series they don't want to wait for more than a year.

Take too long and your readership will go elsehwere (unless you're a huge name).
HB x

Very thought-provoking. As a slow writer, I know that it takes time for me to discover where a book's going. It's a process. But it's also a product, once a book hits the market. And 'brands' have to stick in the memory and can be all too quickly forgotten.
Susiex

I think that's a very strange thing for them to have said! I am a superfast reader though, so I guess this just slightly baffles me. If I love an author, I can't WAIT for their new book to come out.

Caroline, who are the authors you can't wait for? I'd far rather wait five years for a new Hosseini than read one he'd forced out in a hurry (not that he would.) I think scarcity can be its own marketing ploy.

Helen - take your point about crime, though there's so much choice in that genre I don't often find myself short of choice. But do readers really forget about authors they read and loved or go elsewhere? I'd be surprised.

This post baffles me as well! I am always thrilled when a new Sophie Kinsella book comes out, it seems to take for ages. Same with the Teen Romance with Bite i've been reading (and i know other fans feel the same as me) - we are constantly checking Amazon, bemoaning the fact is is pre-order only or, worse, not written yet. Maggie Stiefvaters final part of a trilogy is out soon - must go and check the date again!

I can understand the desperation for the next book by a top favourite author to come out (I remember the agony waiting for the next Dorothy Dunnett, even though I knew they couldn't be rushed) but as well as to-be-read books I have an ever growing list of to-be-RE-read as I learn more about writing, AND because I often can't remember what they were about or like a few months/years down the line.

Anonymous and Sandra - I think the literary festival organisers who said slow down would agree with you. It's great to be desperate for the next one, especially books that can't be hurried. I think what they were saying is the volume of books printed these days and the fact that many publishers encourage a book a year means there's an overload and some of the books that come out are rushed, but needn't be. I was astonished when they said it, but thinking about it, I quite like the sentiment.