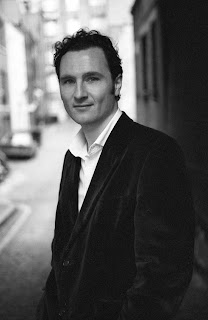 
François Rabelais and Anthony Burgess for intellectual bawdy and smut; Emily Bronte, so I could try, for one night, to make her happy.


Wish I could say it was donuts - my next book is called the Donut Diaries of Dermot Milligan - but I don''t actually like them. I'm more of a muffin man.


My Mac, of course. Or occasionally goose-quill on vellum.


Hollywood, I think, for the parties - dwarves with bowls of cocaine on their heads, that sort of thing. No, what am I saying ... Booker.


There's room for both.


It always comes out perfectly the first time.


Plotter or panter? [Do you plan all your work first or write by the seat of your pants?]


I have a good idea of both start and end points, but the journey in between is pretty random.


Totally depends on the particular book. Hellbent ends with a cliff-hanger, The Knife that Killed Me leaves nothing unsaid.


You really must read…


The Greenlanders by Jane Smiley.


I get most excited by…


Lightning (a big flash just went off right over my head!)


Oscillate between believing in their own true greatness, and knowing that they are completely useless at the job.


Anthony McGowan is a multi-award winning author of books for adults, teenagers and younger children. He has written two highly acclaimed literary thrillers, Stag Hunt and Mortal Coil, for Hodder & Stoughton, and three young-adult novels, Hellbent, Henry Tumour and The Knife That Killed Me, for Random House. Random House also publishes his Bare Bum Gang series for 7-10 year olds. His latest book for children, Einstein¹s Underpants, was shortlisted for the 2010 Roald Dahl Funny Prize. The Fall, a novella for teenagers, was released on May 21, and The Donut Diaries, for 9-12 year olds, in August 2011.
Posted by Caroline Green at 06:00

I used to love lighning, but I think in my old age (!) my interest in it has dwindled! Now, fear takes over.

Thanks for participating, Anthony.

Great answers, thank you Anthony. Although I'm very worried about the not liking doughnuts thing. What's WRONG with you?

Amen to your final piece of advice, Anthony - I ride that pendulum every day!

My boys loved Einstein's Underpants by the way!