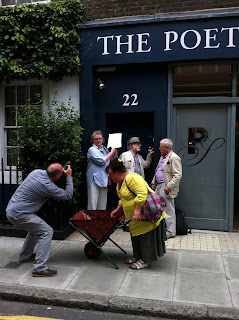 You may have heard of the recent troubles at The Poetry Society. There has been a spate of senior resignations in the last couple of months including the President of the Society, the wonderful, Jo Shapcott.

A group of poets convened by Kate Clanchy has been campaigning for an Emergency General Meeting to find out what has been going on. Now, I'm not normally one for joining protest marches or taking part in riots; I'm ashamed to say that the government can cut practically anything and you won't find me peeing on the statue of Winston Churchill, but I couldn't resist the opportunity to accompany the requisition to the offices of The Poetry Society.

This was mostly because it was delivered in a red wheelbarrow, a la William Carlos Williams. Suddenly so much depended on being there. My main role was to take a few pictures, alongside the chap from the Guardian, and I also took it upon myself to recast the requisition into pentameters (see below). The thing had been drawn up with the help of lawyers, and this I deemed inappropriate.

We, the undersigned, constituting
As we believe, roughly ten percent
Of members of the Poetry Society,
Have learnt about the resignation of
The Chair of the Trustees and the Director,
The Finance Chappie and the President,
And in order for us to determine
Whether the remaining Board of Trust-
Ees continues with our fulsome faith
We now require the Board to summon up an
Extraordinary General Meeting
In which to spill the beans on these events
In the lucid and trustworthy manner
Members of the PoSoc would expect
Of its elected representatives;
An independently chaired forum for
The statements of the members and their questions;
And detailing account of how the Board
Will continue with the PoSoc's business
In accordance with its stated aims.


I also grew a beard specially for the event, so that I would not stand out from the other poets. 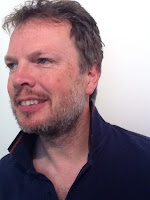 Anyway, it was quite a pleasant afternoon and an addition to my list of excuses for not writing. Only about six of us turned up, but the wheelbarrow contained over 400 signatures, including the Poet Laureate. Laura Bamford, the acting Chair of the Trustees greeted us in good humour - it was nice to meet her. The good news is that our requisition has been successful and there will be an EGM later this month.
Posted by Roderic Vincent at 06:00

Love the poem, love the photo, love the beard.
Susiex

Kathleen, were you one of the requisitionists too?