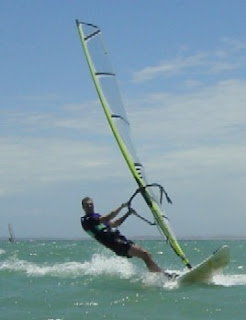 There wasn't much wind over the last two weeks in Kos. That's the frustrating part of my obsession with skimming across oceans on a board. So I found myself having a deep holiday romance instead . . . with Michael Hofmann. I had read his poetry before, but having acres of time spread out before me I took the opportunity to immerse myself in his work. Or at least as much of his four collections as are replayed in the Selected Poems. And this was the first time, for a long time, that poetry worked on me the way a novel does: transporting you into another world.

The poetry renders Hofmann's experience of the world, often from within a shabby hotel room, with a world-weary writerly ennui that I find extremely appealing. It brought about the same mood in me as some Paul Auster novels, especially Leviathan. The Hof's second collection Acrimony is the one I enjoyed most. It builds as a story of a young man's search to know his novelist father. A father who isn't available for knowing. Most of the poems are written in a relaxed blank verse, which does lend itself to building up a narrative. I love them for the wryly observed details of mundanity. For example the way his mother staggered about like a nude / in her sun-hat, high heels and bathing-costume on family holidays. Or how in one of the many hotels Our beds are at a hospital distance and in another, The television swings into the room on a hinged extension / like a box camera or a boxing glove / or something at the dentist. That last hotel is experienced on An hour's sleep on the back of eight hours of drink, which is more or less how I am writing this post now. Perhaps that's another reason I relate to The Hof. I love the way his self-obsessed self shines out of the poems.

After the intensely personal journey of Acrimony (1986) came Corona Corona (1993) where the poems are more political and geographical. We meet The Hof on his travels, especially in Mexico where Every shoe is a spurred boot, every hat is a stetson, / and every car is a Dodge pickup. For a while his father is forgotton, but he comes back to centre stage after his death in Approximately Nowhere (1999) with many moving elegies. The title of that collection comes from a poem about directions to the cemetary which is approximately nowhere / ten stops by underground then bus / zigzagging through the suburbs.

As a writer there's lots to be learnt from Michael Hofmann. His use of symbolism is beautiful. And he is a ultimate master of "show don't tell". He always resists the temptation to comment on what he sees. The endings of his poems are some of the strongest lines and often sum things up with a skillfully chosen detail. The last line of the poem Nights in the Iron Hotel where Hofmann is watching tv is A gymnast swings like a hooked fish.
Posted by Roderic Vincent at 17:57

Thanks for the heads up on all these poets whose work you read, Rod. And I'm definitely in the mood for some sunshine!

And might I say, Roderick Vincent, congratulations for getting Commended on the Yeovil Prize poetry category. All that reading is obviously paying off.:)

Ooh congrats from me too....Gillian