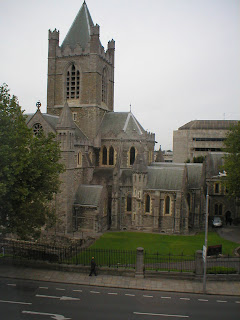 Regarded as one of the most important novels of the 20th century, Ulysses by the legendary James Joyce and my fellow countryman describes a day in the life of Leopold Bloom. Bloom's journey runs from the Martello Tower in Sandycove, Dublin, Ireland, back to his home in Eccles Street. And each year many Ulysses fans follow in their footsteps during Bloomsday, an event observed annually on June 16 to commemorate the life of James Joyce.

This brings me on to the topic of Dan Brown and how places featured in a novel can enjoy a huge influx of visitors. Finally, millions of Dan Brown fans are able to open his latest code-filled mystery, The Lost Symbol. The world-renowned author of best-sellers Angels and Demons and The Da Vinci Code, has already enjoyed record-breaking sales figures with his latest release. And with the hype that surrounds the books, the locations featured in the narratives have also been swept up in the adventure, as code-crackers follow Harvard-hero Langdon in his journey.

Rome and Vatican City, the setting of Angels and Demons, has enjoyed an influx of visitors, thanks to Dan Brown including them in the book. Tourists flocked to the area particularly in the summer of 2009, when the film was released in cinemas. Now there are tours and attractions that specifically follow the events in the book. While the tours cost money, there's also the option of going alone, taking your time, and enjoying a self-guided tour. You can enjoy St Peter's Square and the Sistine Chapel as well as the Castel Sant'Angelo on your own timescale. Tourists can take advantage of cheap flights to Rome, especially now that there are mammoth discounts during the recession.

But the influx of tourists who crammed into Rome was not unique to the city. London, France and rural parts of Scotland, also attracted Da Vinci Code lovers. For cracking clues in London at your leisure, the website LondonTown.com has a Da Vinci Code personal guide which includes plot summaries along with useful tips for Dan Brown thrill lovers.

And don't forget a jaunt to Paris, For piecing together the French puzzles The Louvre museum has created its own walking route within the galleries, combining elements from the story with actual truths about the museum's legendary artifacts.

The Scottish-based scenes in The Da Vinci Code take place outside Edinburgh, at the beautiful Rosslyn Chapel which I hope to visit some day. Again, it's easy to reach and has enjoyed an influx of visitors since Dan Brown started penning his books.

This list of places to visit is by no means exhaustive. Read the books for yourselves and plan your own literary holiday.

Photo of Christchurch, Dublin, by me!
Posted by Gillian McDade at 06:00

Whatever you think about Dan Brown, isn't it kind of wonderful to think NOVELS are prompting people to do that? I love that.
Thanks Gillian, interestin post.

Hmm, reckon the Harry Potter theme park will make a load of money too!

So where would your literary holiday of choice be, Gillian?

I must say i like visiting the National Trust mansions and imagining myself sweeping through the gardens like Jane Austen's characters...

Hhm, now you've got me wondering what my ideal literary holiday would be. It would definitely involve walking through a wardrobe into another world...
Susiex

Thanks Caroline, glad you enjoyed reading it!
Sam - my choice is definitely Dublin - I must make Bloomsday my next short break - the city has such a rich literary history and Belfast too, is slowly catching up with CS Lewis and Seamus Heaney landmarks.
LOL Susie! Great 'Disney' type adventure that would be!

Hmmm...Dublin for me is full of 'rellies' so I never get to see the sights. For me, it's Rome.
Interesting post though Gillian and it made me ask myself why both my books are set in London when surely I could enjoy researching Rome or Rekjavik or somewhere else?!