Whose Book Is It Anyway? 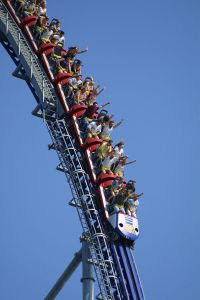 Two thirds of the way into my novel, something extraordinary happened. My manipulative youth who nicks his mum’s contraceptives and Prozac to flog at school, turned out to have a heart. He gave a short, inarticulate but impassioned speech to my protagonist about how much he loves the girl around whom the story is based. I looked at my notes in panic. He’s not supposed to do this. He’s a git, from a strong, unbroken line of gits. I hadn’t figured much of a heart beat under that scrawny chest. If I’d wanted my characters to extemporise so far from the script, I’d not have bothered plotting the book before writing it.

But now that I saw him trying to behave honourably when all around him adults schemed and brawled, I realised I must let him, just as my own kids deviate from plans we’ve made if they have a better idea. What would happen if at the end he got back together with the girl? The replacement boyfriend I’d lined up for her wasn’t shaping up as planned either: he kept snickering away like Beavis and Butthead when I'd instructed him to be unobtrusively gorgeous.

I imagine any novelist reading this is thinking, ‘Already two thirds of the way through before that happened? Duh! That’s how books get written.’ Alice Walker claimed the characters from The Colour Purple marched into her kitchen one day and started dictating their stories to her. And though I recognised the vividness of a character’s presence in what she described, their autonomy was alien. My character’s bid for freedom was a revelation after the control-freakery of short fiction writing where every comma is scrutinised. Trying to control the first two thirds of the novel had been like the agonising slow haul towards the crest of the Big Dipper; now momentum from the hard slog was sparking change.

As soon as one character got free rein, they were all at it, petitioning for improvements to their script, ganging up on me:

‘Can we come in three scenes earlier please, because we have just driven all night from London to Northumberland, so we think we deserve a better entrance than just arriving on boring old schedule at the flat.’

‘Could S and I actually not get tied up in an old clock tower because we think that’s desperately naff plotting? We thought you could give a juicy scene to C instead, because she hasn’t done much since p 54, and you know what she’s like with a bottle of caustic soda in her hands…’

Yes, yes, all right! I started feeling for Mike Leigh – all these actors he hired as walk-ons improvising their way into lead roles.

It has been strangely like having children. After a while you stand back and merely watch in awe as they whir around the furniture, creating turbulence, proclaiming and demanding, and you think: Who on earth made you? Where did you come from? What are you going to do next? Because I have no idea. From now on I’ll just stay quiet and observe. It’s more fun for all if I do…

Excellent post, Susannah. A great reminder of why this writing business can be such great fun (if a bit nail-biting at times). I had a similar experience with a female character in a novel who disappeared for two chapters. No one knew where she was. The chapter where she was meant to reappear didn't turn out that way (I wasn't mentally ready to write her return, knowing how emotional it would be) and then suddenly in the middle of someone else's scene, without warning, there it was - the perfume she used, in the air, being sniffed by the other characters. She was hiding in the house where they'd gone looking for someone else entirely. It was unnerving to me, but very exciting. Sometimes it pays to have that "seat-of-the-pants" feeling when we're writing, doesn't it? Because if the characters have surprised US they should be astounding the reader. I'm glad your git grew a heart. And I like your analogy with allowing our children free rein to develop and change.

That for me is the absolute bliss of writing. I adore that feeling when characters start doing their own thing....although as you say, the buggers don't always do what they're told when they need to!
Great post, Susannah.

What a wonderful post, Susannah, it reminds me of one of the most exciting parts of writing a novel.

Sarah, that's a wonderful example - how the energy pf the surprise hits the characters and reader (and author!) in equal measure. As you say - if we're surprised, the reader will be too. I think it takes guts to allow this to happen, but I want to do a lot more pantsing and less plotting as time goes by. Pantsing being a highly technical term dreamed up by one of Strictly's own. (Caroline? Fionnualalala?)

I love the Alice Walker anecdote Susannah. I can just imagine that :) I must admit though, I had complete control over my characters, until I started my current WIP! Great blog.

Great post, Susannah, and what a fantastic feeling. I guess it really is like giving birth: suddenly the baby is out there and waving his arms and yelling blue murder!
Plotting and Pantsing originally came from the Writing Women's Commercial Fiction course several of us went on in London this summer. Glad you've discovered your closet Panter!

Susannah, thanks for a great post. I think we all get caught up in the business of writing that we forgot why we became writers in the first place.

Character writing is the best. And like real life, the character can go through many transitions in your story. And irony is the best policy...you want to compel your reader to turn the page!!

Hi, I know absolutely nothing about writing so my opinion doesn't mean much but I found your post really interesting. I love the idea of characters shaping as you write them and becoming more than you originally envisioned. I am new to your blog by the way but really like it.

This is an awesome post. I love when I hear writers say that their characters take on a mind and plot of their own. I haven't gotten that far in my own writing, but I think it will be really cool to experience when I do.

Hello, Kate and Jessica - nice to see you here!

Yes, Hi Kate, Jessica and Review the book. Thanks for stopping by. There's a group of writers here blogging daily about different aspects of the writing life so do come by again.

A great insight - inspiring. Not sure how I came across your blog but I'm following you now.

Ah, just realised how I came across your blog...you were the only other person on here with 'A Child in Time by Ian McEwan' in their favourite books. I studied it at A-Level and have been hooked on his stuff ever since. Genius.