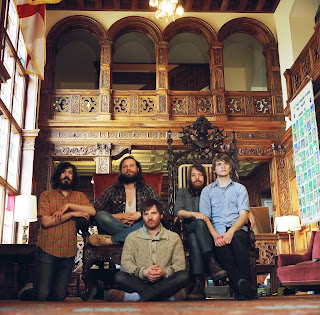 I love an alliterative band and indeed a group which pays so much attention to what they're saying. Don't give me any of this mind-numbing Cascada or Basshunter nonsense, give me a band which has something of value to say in its lyrics. Give me Fleet Foxes.

The band is performing tonight (Monday, September 7) at the fabulous Vicar Street venue in Dublin and I was of the few (700 or so) who managed to scramble onto the Ticketmaster website a few months ago in a desperate race to get tickets once the clock struck 9am. The Seattle-ites are a breath of fresh air in today's music, even if they are influenced by the likes of the Beach Boys, Fairport Convention and My Morning Jacket. They have a unique talent for writing lyrics which are powerful and beautiful, yet simple, and all credit goes to the band members – Robin Pecknold, Skye Skjelset, J Tillman, Casey Wescott and Christian Wargo.

Song lyrics, and poetry and prose, are in my estimation, inseparable twins. Some say the music makes the lyrics more beautiful. Any band will tell you that their song lyrics are not expected to stand on their own. When stripped of their musical accompaniment, some might say the words when read aloud, seem a little 'flat'. A similar problem occurs too, in that so-called 'modern 'and 'post-modern' poetry would sound odd set to music.

I once read an article which claimed the recording artist Morrissey is a poet as great as Philip Larkin, the only difference being that Morrissey wrote his song lyrics to fit the melody, and Larkin wrote his poetry to fit metre.

Fleet Foxes' song White Winter Hymnal, while refreshing and hauntingly beautiful with a video to match, has one simple line. To paraphrase, the protagonist is following a pack who are described as being 'swallowed in their coats' and they have red scarves tied around their throats to stop their heads from falling in the snow. Then the protagonist turns round and sees Michael falling and turning the snow red like strawberries in summertime.

It was only last year the checked shirt-clad band released its self-titled album with the music, hushed, wistful, melodic, harking back to the days of yore. It is a gem which should be a listening priority for any self-respecting music fan. The choral harmonies of Crosby, Stills and Nash complement the lyrics, and instead of enjoying their poetry bare, in the stripped sense, you get double for your money here.

Their songs 'Ragged Wood', 'Mykonos', and 'Blue Ridge Mountains' can all stand alone as poems, but when you add the music to these pearls they become simply outstanding. In 'He Doesn't Know Why' the lyrics deal with mortality — 'Tiger Mountain Peasant Song' finds the singer "staggering through premonitions of my death," and in Oliver James, the narrator finds a drowned child on the banks of a river.

Can any blog readers suggest poems they'd like to see accompanied by music? TS Eliot's The Wasteland perhaps? I imagine it would sound like a Jesus and Mary Chain Song. Or what about a Philip Larkin verse? Or is there a song, which, when stripped of music is just as good as a poem? Over to you...

Hi Gillian, great post. I've often thought how disappointing the lyrics are from most bands. There are few who write words well and my own preferences in music are always heavily influenced by lyrics. For me the two songs that meet your criterion of standing alone as poems would be Natalie Merchant's Verdi Cries and Billy Bragg's Tank Park Salute.

Sparklehorse are a great band and some the imagery in their lyrics can be very poetic. The line 'I play great keyboards of horses teeth' springs immediately to mind, from 'Saturday' on their first album 'Vivadixiesubmarinetransmissionplot.' Interestingly, they recorded William Blake's 'London' back in the mid to late nineties. I had it on a tape free with a music magazine, long since lost. It was a perfect interpretation of the poem. What I wouldn't give for the track on mp3 now.

If you want good lyrics I give you Mr Bob Dylan and Mr Cole Porter. Enjoy your concert,Gillian - I know how much you've been looking forward to it.

I agree with Jem that the best of Bob Dylan is pure poetry, as is some Leonard Cohen, who started out as a song writer, and Paul Simon (Slip Slidin Away lyrics are heartbreaking in their economy and simplicity) some Lyle Lovett, Jarvis Cocker, Aimee Mann, Tanya Donelly/Belly, Ray Davis - but I'm attracted to music with good lyrics.

It's harder the other way round.... Robert Frost or Louis MacNiece or Manley Hopkins maybe?

Something I played permanently in the background when doing the first draft of current WIP was Philip Glass's version of Rumi's poems - Monsters of Grace - which I saw live years ago and adored.


Have a fantastic time at the concert Gillian. My husband will be so envious - they're one of his favourite bands.

Oh dear, I have to turn off the radio when they come on... I know I must be a philistine. They remind of Crosby, Stills and Nash and I honestly don't think they are that original. Sarah now ducks down under a hedge to hide.

For me it takes a lot to beat Barry Manilow:

Sorry:) But that always makes me really laugh when i hear it:)

I'm not a fan of Fleet Foxes but I love to hear anyone being passionate about music like this. I am a music lover but a bit of a phillistine about lyrics, which is crazy for someone who is meant to be a 'words person'!
My husband adores the Scottish band Idlewild and I do think they have fabulous lyrics though.

I did try to think of a more erudite contribution...

Susannah, I was just about to leave a comment saying that I'd love to hear Rumi's poetry set to music! I did hear an acapella group doing this once - it was totally fabulous.
Susiex

Great choices Rod :) I'd forgotten about Natalie Merchant.
Dan - I agree that Sparklehorse are great - I must listen to them more often.
Good choices Geraldine and Susannah - Bob Dylan!
Sarah - tut tut ;)!!!
LOL Sam!
Haven't heard Idlewild for a while Caroline.

Thanks for all the comments - the concert was amazing last night - definitely one of the best I've seen in years - and band, if you are reading this, please visit Ireland more often :)

i mainly look for the song lyrics and its message..its not just because of the artist/band...:)