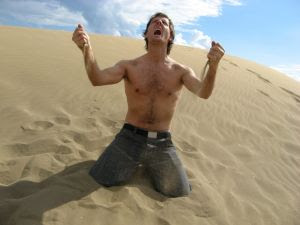 I know you will be hardly able to contain yourself but...here’s another instalment from the coal face of NaNoWriMo. What more is there left to say, I hear you cry. It’s a fair point, well made.

I digress, but how on earth do those daily bloggers do it?
I mean I like being part of the Strictly crew and posting every couple of weeks on a subject that I’m interested in, and hopefully, others will find interesting too.
But blogging every two minutes? What do they talk about? The state of the nation? The state of their cupboards?
Either way, I’m not convinced anyone wants to read what I’ve got to say more frequently than they empty their dishwasher.
Belle Du Jour, may be the obvious exception to the rule, but for most of us, life just aint that titillating.
Anyhow, back to NaNo.
All was going well: word count on track, plot skipping along, structure holding up.
Then bam.
This week has been hit with a classic case of life getting in the way of art.
Of course, for most of us writers, this is part and parcel of the life. A contracted novel takes me a year and during those long twelve months any number of catastrophes happen that suck me away from my desk. What I normally do is make up the hours later. Like a civil servant on flexi-time, I operate a system of borrowing and pay back. True, this often requires a 24/7 commitment close to dead line, but I factor that in.
The trouble with writing, or attempting to write, a novel in a month, is that you’re already flat out with no room for manoeuvre. Buying and selling time in these circumstances is a bit like carbon trading – a great idea in principle, but we’ll still end up in the shit.
You can imagine, then, the nightmare of waking up with a stinking head cold mid week. No chance of sipping Lemsip and surfing the information on Swine Flu. Instead, shoulder to the grind stone, with a chapter to knock out. Thank God, that by Friday, the mists were clearing and I could sweep away the carpet of snotty tissues that had amassed at my feet.
By this point I was way behind, but was lulled into a false sense of security by the fact that I had the weekend ahead of me. I could, I told myself, make up the difference.
Then tragedy struck. I came downstairs and found a plethora of email in my box. Among them, a witty string of mails from the Strictly crew about a certain attractive actor. Inappropriate things were bandied about and, me being me, I couldn’t resist sending a response that I could not repeat here. Suffice it to say, it contained the words ‘dirty’, ‘vampire’ and ‘bite me’.
All a terrific hoot until I checked my sent box and discovered I had mailed it, not to the guys on Strictly, but to the parents of my son’s under 11s football squad.
I am so mortified I have spent the weekend, not writing, but alternately squirming and drinking.
The match on Sunday was cancelled, apparently due to the rain, but my mind is racing...
Today I must get back on track. I must write like the wind. And I must try not to send my children’s Headmaster a photograph of myself maked.

My Nano has turned into a bit of a disaster - i've stuck around 7000 for ages, rewriting and rewriting. I know, shoot me - but i can't decide on the MC's age or the voice. A jolly, jokey 13 or a more wistful, aware 17. It doesn't help that i've never written for teens before. Ahem. Or about werewolves.

And then i'm thinking the whole werewolf thing is so derivative now anyway, i may as well give up before i start.

Who ever said Nano was just a bit of fun!

LOL again, Helen!
My (unofficial, very small) version of Nano is still trickling along. Like Sam, I've written about 7,000 words. Actually, hey, it's not Nano. It's writing.
Susiex

Glad I'm not alone...
I think I'll still crack on, but that intial Pollyannaish enthusiasm is starting to disappear.
HB x

Excellent post, Helen. I can't believe Nano is almost over and I've only managed about 7,000 words.

Still laughing Helen. Sorry!
I'm doing Nano but (no surprise to those who know me) I'm doing it on my terms! It makes me write every day so that's great, but I just HAVE to edit as I go along and I can't just splurge it all out with little thought- as when I've done that before I've gotten myself into awful pickles.
I'm loving the project (9000 words so far), what I've written and the fact that it came from nowhere reminds me why I love this writing thing...

Helen, I'm afraid I've had to re-tell the story of your Friday nightmare. Is it any consolation that it always gets a huge laugh?
Probably not...
Hope the cold is better anyway and I think anyone Nano-ing is a hero.

Oh dear! That's always my fear that I'll email someone something 'inappropriate' when it was meant for someone else! So commiserations on that one.

NaNo, although I wouldn't say it has been a breeze since I started, I've certainly done far, far better than I thought I would. But maybe the time was just right for me and I had the right idea for me to use as material for my NaNo novel. If I tried it next year I might not be able to do it in the same way.

But, I'm finding it an interesting exercise and when I really get into the story, yes, I do enjoy writing it. But not so whwen I'm struggling!

I find the best approach with vampire issues is to suck it and see...ahem. Actually on the subject of Nano, as a non-Nanoist, I've still been pushing myself to wrote more than usual for that shitty first draft. So all the talk of massing wordcount is good for me as I feel I'm riding in your slipstream.