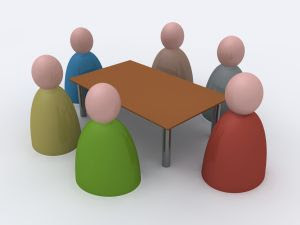 I’m writing some sample chapters for a series fiction packager at the moment. In case you haven't heard about this kind of thing, here's a quick lowdown. There are a small number of companies out there who come up with a story/series concept as a team effort. They develop it very carefully in-house until they have a detailed breakdown of the content, chapter by chapter. A brief is then then put out to a bunch of writers who produce some sample chapters for free. The one whose style and handling of the story is seen as the best fit will be paid to write the whole book, often with a view to writing a series. The packager then sells the whole thing to a publisher. Many of the series you’ll see in the average Waterstones, especially in the younger children’s category, are created in this way and the name on the cover is usually a pseudonym.

What’s in it for the writer? A bit more income, mainly, something most writers are in need of. I met the author of one very successful series of this kind recently and she told me it’s basically a ‘nice little earner’, even if her name isn’t on the cover. I’ve also come across several writers, successful authors in their right, who didn’t get chosen after submitting the initital chapters, so I don’t have high expectations, but I’d love to get picked. In theory, unagented/unpublished writers can be considered for these projects. All I know about that is that I heard nothing when I approached these companies pre my contract for Dark Ride, but when I mentioned wanting to do this to my agent, post-contract, things happened very quickly.

Not having to think about a plot has been enormously liberating for me and I’ve had a real blast writing these chapters. You’re given such a detailed outline of what to write, you can just concentrate on voice and style and all the twiddly embellishments that bring a story alive. I’ve enjoyed it enormously and the best bit is that if chosen, you get paid regardless of whether the packager sells the books to a publisher.

I know it isn’t always a straightforward ride and writers may be asked to submit several times to get a style exactly as its wanted. That all has to be done for free. But if you do get beyond these initial hurdles, writing for a packager could be another very useful source of income, as well as an interesting excercise in how a story can be created.
Posted by Caroline Green at 06:00

I think this is a damn good way for a writer to supplement their income.

My son, when he was younger, absolutely loved the Beast Quest series which was written in this way. And before anyone sniffs...the qualirty was very high, as you would expect given the writers are all pros.
HBx

Yes, my son loves the Dinosaur Cove books and they're written this way too. Animal Ark too, I believe...

I find all of this fascinating - and I have done ever since I discovered that one of my favourite teen series (published years and years ago) was partly written in this way. Thank you for a really interesting post!

Sounds like great fun. Good for you. I didn't know that about Beast Quest. Ooh, I love learning new things. ;) Thanks.

Really interesting Caroline. Good luck with your sample chapters and hope you get picked. Great to know this opportunity exists. X

Thanks all - will keep you posted!

Fascinating, Caroline - I had no idea this happened. Very best of luck with your chapters - hope they pick you!
Susiex