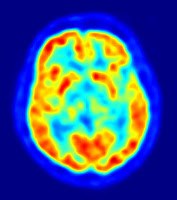 Happy New Year to all our Strictly Readers!
It's a time for resolutions and developing good new writing habits, and in a recent post I mentioned that I planned to note down all the fiction-related ideas that flit half-formed around the periphery of my mind throughout the day.
Well, I went one step further than that and, after several minutes of doing no research whatsoever, I invented the Brain Backup. It's a tiny device that plugs into the side of your head – so small that if people notice it at all they think it's just some new-fangled headphone or hearing aid. But the Brain Backup is nothing ordinary. This invention can instantly save the brilliant thought that just sprang into being.
Thoughts are fickle things. Within seconds of its glorious arrival, an idea can escape from your mind's warm embrace and skip off into the ether, leaving only an imprint that says it was there once, and it was amazing.
Ideas need to be captured in those few seconds. A notepad or voice recording device are the writer's current options, and very successful they are – if you're lucky enough to have a few moments spare (moments that could turn to hours if someone has run off with the notebook and every working pen within 500 miles). More likely, the inspiration will arrive at the point when one toddler is shouting 'I need a poopie!' while another is ascending the bookcase, or when you're behind a shop counter trying to cling to the will to live while a customer dithers over whether to buy large eggs or medium. What if it arrives during a funeral or a wedding, and chuckling to yourself while you whip out a notepad is not quite the done thing?
The Brain Backup is always with you because it's embedded in your head by... er... some kind of process – I'm a bit hazy on this part but I'm sure it'll be fine. As soon as that brilliant idea manifests itself, you touch the device and the thought is saved, to be wirelessly downloaded to the computer at your leisure.
I have always hoped that if something is so important to my novel, then of course I will remember it, but oh, no! I find that the even the most vital ideas are crowded out by the demands of everyday life before they can properly take root. My invention might need a bit more work – the brain surgery aspect, for example – but soon I'll have a way of capturing every thought from 'this book will be a three-volume dystopian epic satirising the Otherness of imperfection in contemporary society,' to 'Fred scratches his arse – v. important later!!'
As for the term Brain Backup – that's just a working title for now. I thought of an excellent product name last night just as I was about to go to sleep, but... you know how it is.
Posted by Caroline Rance at 06:00

Ah, I had my credit card details at the ready too...

You could always try Dragon's den to pitch the brain back up idea to - it's a wonderful product!If only eh?

Wonderful idea - all writers should be given free ones!

If only... and yeah I know that feeling just before you go to sleep!