A Razor Wrapped In Silk 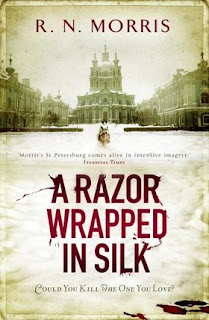 My Dad was a funny old sod.
On the one hand, he was a hard drinking Yorkshire miner who thought wearing gloves in January was nesh.
On the other he harboured a passion for Italian opera and had a life long love affair with Russian literature.
His fave book was Crime and Punishment by Dostoyevsky, which he re-read every year, finding, he said, some new gem each time.
So, it was with a degree of trepidation, that I agreed to review A Razor Wrapped In Silk, by R.N. Morris, who has, daringly, co-opted Dostoyevsky's canny magistrate, Porfiry Petrovich, for his series set in imperialist Russia.
This, the third book in the Porfiry series, tells the tale of two very different crimes. The first, a barely registered death of a serf. The second, the shocking murder of a lady of high rank.
It is Porfiry, of course, who investigates, with his characterisitic steely elegance and it is through his eyes that we see the disparate worlds of St Petersberg. The oppulence and wealth of the ruling classes versus the brutality of hard poverty.
For my Dad, the trade unionist, this was the crux of Dostoyevsky's genius. His ability to conjure the inequality of pre-revolution St Petersberg was powerful. It has to be said, however, that Morris too imagines the juxtaposition with ice-clear sharpness.
Indeed, so well drawn is 1870 St Petersberg, that the city becomes a character in its own right. Porfiry may be clever, but St Pertersberg is the complex and conflicted star of the show.
It's true that this is a crime novel, as opposed to an all out thriller. There aren't twists and turns at every corner. The book, however, is no worse for that, in my opinion. Instead, the prose is allowed to stand and shine, the atmosphere permeate.
There is enough tension to keep any reader happy.
If my Dad were alive today I wonder what he would think. Would he be shocked at Morris'audacity?
Perhaps.
Though I have a sneaky suspicion that he would like this book, very much indeed.
Posted by Helen Black at 06:00

It's a great book.

I'm ashamed to say this is still in my reading pile. After Reading your blog I think I'll move it to the top!

That's another one for the wishlist. Sounds superb!