Help me put this book down! 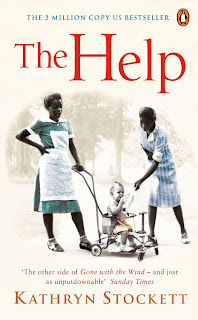 The critically-acclaimed The Help by Kathryn Stockett, set in the 1960s in the segregated Deep South, is a seriously impressive book. This page-turner, a kind of slow Mississippi Burning, is told from three points of view.

In the book African American domestic servants (the coloured help) Aibileen and Minny work for the white ladies of Jackson, the creme de la creme of society. Aibileen has raised 17 white children, but sadly her own son was killed in an accident at a lumber yard, while Minny can't hold down a job because she talks back to the white women. And then there's 22-year-old Skeeter Phelan, a young white lady who has recently come home from college, Ole Miss, to find out her childhood maid has mysteriously disappeared.

While Aibileen and Minny are simply trying to make a living, Skeeter is in the enviable position of being able to pursue her ambition of being a writer. Inspired by her maid Constantine, who vanished, she comes up with the idea of collating the stories of the maids, for a publication. The worst of the female bosses, Miss Hilly, a Cruella De Vil character, treats Minny like a thief. And she campaigns to have Jackson households install extra toilets so that colored help do not have to use white families’ bathrooms.

Given that this is set in the 1960s, if any of the white women found out their servants had been talking publicly, they would have fired them. Furthermore, it a also illegal in Mississippi as it contravenes the Jim Crow segregation laws. Descriptions of the early activities of the civil rights movement are peppered throughout the novel and it gives it a true authentic setting.

This is an utterly compelling and thought-provoking book and I dare anyone to say otherwise. At first glance my initial reaction was that it's far too commercial for me, but how wrong I was. When I started reading, I couldn't stop, and this book, which deserves all the praise in the world, prompted many 4am reading stints.

Apparently Kathryn Stockett spent five years writing this novel, which clocked up almost 50 rejections from literary agents (high five Kathryn!) It was a number one New York Times Bestseller and has sold all over the world. A movie starring Sissy Spacek and Emma Stone is due to be released next year.
Posted by Gillian McDade at 06:00

Makes you wonder what those 50 agents were thinking. It is such a powerful book and I can so identify with your 4am reading stints! Brilliant book.

I LOVED this book. In fact I was so in love with it, I couldn't even pick another one up for ages afterwards; nothing could compare. Kathryn Stockett is an inspiration to us all. Great post.

I have this book set aside for my xmas reading, that delicious time when all the fuss is over, the guests have left and you have some time to just read.

What's extraordinary is that this isn't set evry long ago...and now the States have a black president. Unreal.
HBx

I read this book and loved it so much I recommended it to my reading group. Every one of them loved it too. I live in hope that there might be a sequel.

I'm generally a bit put off books that are all homespun wisdom and grits but I loved this novel too. The characters were so brilliant I felt a bit bereaved when I finished it. I also was struck by how recent this all was, relatively speaking.

Really glad so many of you have read it! And I can't wait for Kathryn Stockett's next book. As long as she doesn't do a Donna Tartt and leave a decade between them.

I heard this serialised on Woman's Hour and loved it but wish I hadn't heard it because now I won't read it.

Currently reading and loving "The Crimson Rooms" by Katharine McMahon.

I too thought this book was superb. What were those 50 agents thinking?

It's on my TBR pile, thank you for the review, I am looking forward to reading it.

Nice post, Really a nice book. Thanks for this wonderful information with us .