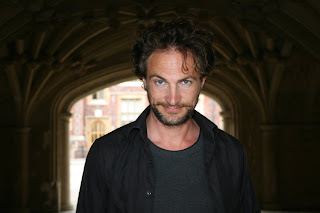 Alongside a 16 year career in publishing Marcus Sedgwick has established himself as a widely-admired writer of YA fiction; his books have either been shortlisted for, or won, over thirty awards, including the Booktrust Teenage Book Award, the Carnegie Medal, the Edgar Allan Poe Award, and the Guardian Children’s Fiction Prize. His latest title is White Crow.
He now writes full time, is Writer in Residence at Bath Spa University, teaches creative writing, and is currently working on film and other projects with his brother, Julian.

That's a real tough one. The film just edges it, because I love film so much.

Broadsheet, though only rarely I have to say.

Independent. Use it or lose it, I guess.

Plotter. Almost every time, though there are some exceptions to that when you just know what you're doing without having to plan tooooo much.

Cliffhanger, everytime. I want to do some work when I read and so that's the kind of book I write too.

The First Century After Beatrice

New ideas, or rather, new and exciting ideas. The unusual and the strange and the unexpected.

Sad, grumpy, frustrated. Unless I'd managed to be a musician instead.

Remember their manners.
Posted by Caroline Green at 06:00

I recently read White Crow on a very delayed train between Winchester and London and barely looked up because I was so gripped.

Many thanks for coming over to Strictly, Marcus!

That's some dinner party, with Poe, Peake and Hemingway.

I'm always intrigued when authors recommend books I've never even heard of. I've just Googled The First Century After Beatrice and love the premise. On the christmas list.

Thanks for visiting, Marcus.

Thank you very much, Marcus (remembering my manners). Yes, I'd like to be at that dinner party, - especially if it were held in a lost room in Gormenghast.

Thanks so much for coming over to Strictly, Marcus. I hear our page loads have (at least) doubled today! :)
Susiex

Thanks Marcus. I really enjoyed 'Blood Red, Snow White' and hearing you talk to MA students at Bath Spa. I'll be looking out for 'The First Century After Beatrice' too. It's always fascinating to find out what writers like to read.

Great answers, thank you. I haven't read White Crow, but will have to now.

Thanks for visiting Strictly, Marcus!

I hadn't heard of The First Century After Beatrice either but like the sound of it - will definitely be looking out for that one.

I so agree that authors should remember their manners, no matter how famous they get.

I haven't read any young adult fiction since I was indeed a young adult. This has resulted in missing out many of the recent titles. Thanks for stopping by Marcus and good luck with future work.