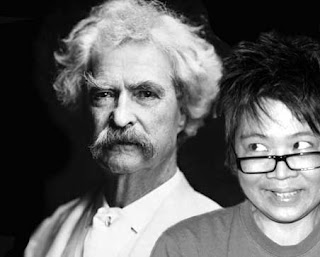 Is this like a date? Do I have to comb my hair?

I wonder if Mark Twain (aka Samuel Clemens) would hog the conversation too much? No matter - he was a legendary wit and comic, and in the late 1800s, he was a vigorous opponent of America's imperialist intentions in my native Philippines. I have many questions to ask him and I will be content to sit quietly and laugh at his jokes (and judging by his hair, he won't mind that I haven't combed mine)

Of course I don't snack. It's against my principles as a healthy eater and an intellectual. However the Cadbury's whole nut chocolate bars occupy far too much space in the fridge and must be consumed er removed. And ice cold Diet Coke I am told is an effective screen cleaner.

I have never written in longhand - I have Miss Valdivia, my high school stenography and typing teacher, to thank for the fact that my penmanship is indecipherable because I can't tell the difference between Gregg Shorthand and the alphabet. After converting from sit up and beg typewriters to computer keyboards, I cannot be creative without the comforting accompaniment of tapping noises and the feel of a QWERTY keyboard at my fingertips.

Hollywood film deal. Definitely. Mainly because I will become very popular with my Facebook friends who all seem desperate to play corpse extras in a movie. But first I must write a novel with corpses in it.>

Is this question supposed to flush out the snob in me? Well, as ex journalists, my husband and I are news junkies - when our employers used to pay for our papers, we had all the broadsheets delivered every morning and spent most of the day reading the darn things. But when I got to my desk at the news agency I worked in, I loved reading the tabloids because it was like seeing the world through a comedy prism with a large bust size. When I covered media for Marketing Magazine many years ago there were interesting discrepancies in the statistics of readers who admitted to buying the Sun and the Sun's booming sales figures.

These days though, we get the Guardian from Monday to Friday (worthy, sometimes too sneery), on Saturday we get the Financial Times Weekend (I love the magazine but hate How To Spend It, the magazine designed to earn lots of money from expensive advertisers), and on Sunday we get the Sunday Times (love the Culture magazine, squirm at the columnists who say things you would never hear in North London)>

When I started trying to get published, I saw Amazon as the Darth Vader of the bookselling world. But now that I am published, I realize that Darth Vader was Anakin Skywalker after a failed facelift.

Amazon does what it does very well - when I give talks about websites, I cite Amazon as one of the best designed websites because it achieves what it set out to do. And because it's in the business of selling books, it is set up to maximize an author's opportunity to sell her books: I get a profile on Amazon, I can upload my videos, I can join discussions with people who want to find books like mine, my book get suggested to anyone who is buying similar .... Amazon is setting a very high standard.

Amazon is part of these digital times. Booksellers were always going to be under threat from new technology. It is just one factor in a long list of things impacting book sales - the other huge thing being the demise of the Net Book Agreement http://en.wikipedia.org/wiki/Net_Book_Agreement
- and who brought this about? *whispers* publishers!

Meanwhile - how can an author not love the indies? Booksellers who actually read books, who take authors to meet their readers, who trade not on technical wizardry but on real relationships. When I was a little girl, my idea of a perfect birthday was to go to a bookstore.

So it's complicated. To be honest, I think the independents would gain more from some kind of Net Book Agreement than any kind of carping against Amazon.

Hacker. As in a hacking cough as I click to check on my word count after four long hours of furious writing only to find that it's gone down instead of up by thousands of words.

I plot in a very overviewy, general, undetailed sort of way and then I see where it goes. Pantser is an inappropriate term for an activity that has reduced the seat of my pants to bare threads.

Cliffhangers every time! Why tell the reader anything?

You really must read.

Here Lies Arthur by Philip Reeve, which I only read last year, was the last book to make me go Wow! (The year before that, it was Cosmic by Frank Cottrell Boyce)

I get most excited by.

Children's drawings. It's like looking at the world through magic eyes.

If I wasn't a writer I would be.

Or maybe I'll be a film maker.

An author should always.

Say YES to life because that's where the stories are. Saying NO is not as much fun. Unless you're a vampire. And then it's boring because immortality is just history repeating itself.


Candy Gourlay is a London based Filipino author and journalist. Tall Story (David Fickling Books) is Candy’s first novel. It was short listed for the Waterstone’s Children’s Prize. Candy is working on her second book for David Fickling.
http://tallstory.net
http://candygourlay.blogspot.com
Posted by Caroline Green at 06:00

Such brilliant answers. Thanks so much for coming over Candy and everyone else, I urge you to read Tall Story!

As someone who thinks Cosmic by Frank Cottrell Boyce is Godlike genius, I must check out the Philip Reeve book..

"immortality is just history repeating itself" Love it - great post - thanks Candy!

What a funny and uplifting interview...thank you so much.
HB x

Cosmic is indeed excellent - so are many new children's books. Smashing interview. I'm not sure I would have been so inventive or interesting with my answers. On a very tired day, thanks!

Loved it, loved it, loved it! I do love a good chuckle especially as I'm nursing my first ice cold diet coke - it had to be done. Thank you Candy for such a wonderful interview.