On putting down your pen - Guest post by Neil Ansell 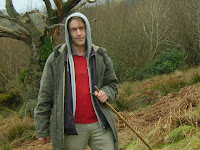 I am writing this from the midst of a perfect storm of promotional activity for my first book. My life just now is one long round of interviews, feature commissions, public appearances and photo-shoots. It is exhausting, but of course I have to seize the moment; it will all be over before I know it. I thought that perhaps the story of how I got here might be of interest to other writers; it has been a long, strange journey.
As a young man I wrote compulsively, every day, and largely just for the pleasure of it, probably for the best part of twenty years. I must surely have accumulated the 10,000 hours that Malcolm Gladwell speculates you have to dedicate to any activity in order to achieve proficiency. Most of my work I showed to no-one. Occasionally I would send something off to an agent or publisher, but a single rejection would be enough to convince me that I was clearly not ready yet. Any ability I have as a writer was honed by the quest for self-improvement; a self-doubt that never goes away, and probably never should. I am rather in awe of those who have such confidence in their own abilities that they will self-publish after a slew of rejections, assuming that the problem must surely lie with the short-sightedness of the gatekeepers.
And then my life changed. I found myself working full time to support a young family, and later I was to become a single parent too. Something had to give, and what gave was the writing. The years passed. Two years ago I quit my job to go freelance, and saw a window of opportunity. I wrote a single chapter of my memoir Deep Country – an account of five years I spent living alone in a remote cottage without services in the mountains of Wales, and a meditation on the relationship between man and nature, and the psychological impact of extreme isolation.
I sent this chapter to the agent of my choice, and received a contract the following day. Everyone she showed it to seemed to want it, and my unwritten book went to auction. These are straitened times insofar as advances are concerned, but I still received enough that I wouldn't have to worry about other work for a year or so. It appeared that I had found my voice in the years of silence.
The book seemed almost to emerge onto the page fully-formed. It was a joy to be writing again, and it was as if I must have been writing it in my subconscious mind for all those years, while I was sleeping. So, my advice to those who have yet to achieve what they want through their writing would be that it may just be that their time has not yet come. And that sometimes it may be no bad thing to put down your pen for a while, and live a little.

Deep Country was published on 7 April and is available in hardback and Kindle editions. To hear Neil talk about his book and see the landscape that inspired it, have a look at his YouTube video.
Posted by Caroline Rance at 06:00

Reading your journey has inspired me to get on with it too. I have two novels almost coplete (first draft) But I'm stalling on getting them finished and edited. I think you're right about putting your pen down for a while too. I think it rejeuvenates your writing.

I think I'm going to be a bit busy for a while!

Wow - I love inspirational stories like this. Maybe getting a book deal is a bit like finding True Love - you have to be happy with who and where you are before it walks into your life and plonks the cherry on top. Fab post - thanks!

What synchronicity - a friend recently sent me your video trailer. We were both fascinated to read that your time in Wales didn't send you into self-reflection, but rather the reverse - you say you became more attuned to what was around you. Can you say why this was?
Thanks for coming to Strictly.
Susiex

Thank you all for your kind comments.
Susie, this is one of the themes I try to explore in the book. It was almost as if, alone, I had no need for self-definition, as if our sense of self is constructed through our interaction with others.
My experience seems to be at odds with that of many others who have written about solitude. I think it was to do with my reason for being there - most seem to go into retreat with the deliberate intention of exploring their inner selves. For me, I was tired out after years of travelling and was living in a squat constantly surrounded by people. For me, this was a chance to learn to stay still and to learn to be alone in nature.

Thanks for the fascinating post, Neil. I've got my copy of Deep Country and am really looking forward to reading it!

Thanks, Neil. This is very inspiring. I guess being still is one of the great challenges for most of us. Am very tempted by your book.
Susiex

Thank you for sharing your five years in Deep Country with us. I live in urbanised Singapore with very little wild life left in its natural state. So your account of being on your own in the Welsh widerness is fascinating and at the same time, inspiring. Being with people all the time I can imagine it could be frightening too to be in solitude.

All the best in combining your writing and journalistic career with being a parent.