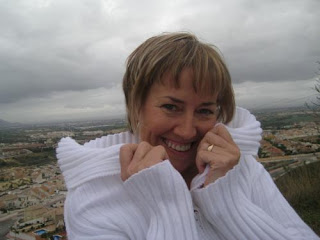 When I received an email over a year ago from You Write On saying they wanted to publish The Chronicles of Joya via a grant from The Arts Council, my husband jumped around the room. I held back. I’d allowed myself to get excited over such things before and landed with a thud on Reality Earth that had left bruises the size of plates on my behind.
When Bloomsbury had read the first five pages of the book and asked to see the first three chapters, I didn’t sleep for a week. When an agent told me on the phone that her daughter loved my book and read it in a day, I let out a yelp. She popped the air out of my balloon when she continued with 'but your book doesn’t fit with my catalogue'. Even though she thought it was great and that I should definitely pursue other agents, it hurt. I’d so wanted her.
Renni Browne, who’s been editing since the year I was born, said I had as much talent as her company’s biggest success story. She assured me of success with The Chronicles of Joya only to discover American agents weren’t looking for animal stories at that time.
And of course there was the instance of self-sabotage. A great agent contacted me. I had an hour conversation over the phone with him and found myself destroying the opportunity because I was scared. Everything was happening too fast. I could hear myself throwing the chance away and a sensible synapse in my brain tried to scream over my fear, 'what the hell are you doing?' I’m sure you’re shaking your head. Believe me, I’ve done the same. It’s a wonder it’s still attached.
So before I allowed excitement to creep in over the You Write On email, I read the small print. I devoured the contract. Twice. It couldn’t have read better. That’s when I allowed the joy and relief to pump through me.
Only after signing the contract did I realise I’d entered into the world of self-publishing. I’d have to purchase my own stock, do my own marketing and sales. It’s something I’d avoided after reading the horror stories from those who’d taken this path.
I had to roll up my sleeves and throw myself in. I designed my website and arranged for it to be up and running the month before release date. With a background in selling contact lenses and shotguns and rifles, I tapped into my old skills to arrange book signings in Borders and Waterstones. I arranged school visits and hoped for the best.
Boy, did I get it. At the book signings I sold an average of 60 books at each event and was invited back to all stores! The children in the schools cheered and screamed at the end of the sessions and emails fly in every day via the website telling me how it’s the best book they’ve ever read.
Life … is good.

lianecarter.com
Posted by Caroline Green at 06:00

Well done Liane. Really encouraging to hear of success stories particularly for us novice writers.Hope you've joined hubby in a dance of celebration!

Great to hear about your success Liane. Chronicles of Joya sounds like a real hit with readers.

A great insight, Liane. And well done on your success. Chronicles of Joya sounds like a great read, so must add that one to my list.

Thanks for the blog!

Thanks so much for posting for us, Liane. Wishing you tons of luck with Chronicles of Joya. I'm most intrigued by the idea of your job selling shotguns and contact lenses!

What a success story! Really inspirational. Your book sounds like it will appeal to my son so I'll show him the link.

Thank you all so much for your lovely comments. You've filled my heart on a Friday. Sorry I didn't get a chance to reply yesterday. I'm in the middle of a book tour and had 40 emails from kids when I finished! Visited 8 schools so far this week and the kids have been screaming, cheering and getting me to sign faces, hands and arms and had me rapping and singing. Great fun. I'm so blessed. You bet, Mary, I'm dancing my socks off. x

WHat a really inspiring post Liane. Thanks for taking the time... F

Fionnuala,
Thank you. I see one of your fave books is The Five People You Meet in Heaven. Have you read Tuesdays with Morrie? Same author and one of my fave books. I sobbed my heart out and by the end of the book I actually thought I was Morrie's friend and knew him. Superbly written.
Happy writing! liane

Great picture and thanks for sharing your book! Be sure to check out my book also!