Me Myself and I 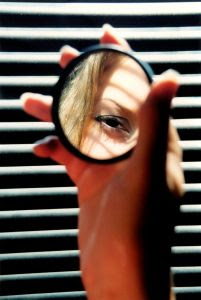 As writers, we naturally like to think of ourselves as imaginative people. People who can weave a story out of thin air, pull sparkling and arresting characters from the ether, create Machievellian twists and turns of plot with audacious creative flair. We follow the whims of fancy, allowing them to take us where they wish, until at the end of it, we have a story or a novel – hopefully original, possibly unique, but definitely MADE UP.

Well, unfortunately, our friends and family are unlikely to see it the same way. In some little corner of their minds, no matter how unacknowledged, they will be harbouring a conviction. Oh, you might tell them that your novel is based on nothing but your own imagination, but they know the truth. They know that, really, it’s all about you. It’s an autobiography, thinly disguised as fiction, and by reading it, they are going to discover all your deepest darkest secrets. Let the hunt commence!

My debut novel, THE ART OF LOSING, is not what you would call a cheery tale. Over the course of its 80,000 words, I cover death, loss, grief, infidelity, incest and plenty more besides. Funnily enough, it is not an autobiographical novel. If I had that much drama in my life, I think I’d have my hands full dealing with it, let alone having enough time to put finger to keypad. And yet I am uneasily aware of that all-too-common perception, that novelists (and debut novelists in particular) write about what they know. “It’s very good,” a friend said to me encouragingly, upon reading an advance copy of my book. “But…” Her voice dropped, taking on a diffident, caring tone. “I didn’t know you felt that way about relationships.” What way, I politely enquired. “Well, you know…” I listened to a summary gleaned from various pronouncements made by my novel’s two narrators. Useless to protest that these were only characters, that their thoughts and feelings did not necessarily tally with my own. By creating them, I had apparently taken ownership of them too.

Of course, I’m not suggesting that our own opinions, emotions and relationships never trickle down into our work. In fact, it took a cautious suggestion from my mother for me to realise that one of my narrators, Nicholas, bore more than a passing similarity to my own father, both physically and in character. I protested that any resemblance was purely accidental, but privately, looking back at what I had written, I wondered how it could have been. All at once I was struck by a terrible thought – what if my novel actually was a 240-page confessional tome, and I hadn’t even realised it? I found myself poring over the words, wondering if I had let too much of myself slip into the story. It’s a dangerous business, this writing – it opens you up to scrutiny, not only from your readers but from yourself too.

Eventually, I called a truce with myself. I know that my novel is far from being based on personal experience, but at the same time, it is me – it has come out of my head, and so even when my characters do and say things that I would never do in real life, I can’t entirely disassociate myself from them. I wonder if any of us could truly say that our work was devoid of autobiographical elements? On that note, I’ll leave you. I’m off to plot a murder to lay the ground for a little crime idea I’ve got bubbling…
Posted by Rebecca Connell at 18:22

Tricky, isn't it? I wonder if it makes a difference writing historical fiction, or science fiction or whatever, rather than contemporary - at least you can kind of hide behind the time factor? I know my first novel is hugely autobiographical - not in terms of the events, but in terms of the themes. And if it wasn't, I don't think I'd have cared enough about it. A friend said she was very taken aback when she came to the first swear-word, because 'you never swear'!
Great post, Becky!
Susiex

This is so interesting - and yes, Susie, I think it applies to historical fiction too, any fiction where you have characters interacting in relationships.

Just coming to the end of my second novel, I had a sudden realisation that certain themes have been repeated, that there is a defininite 'father' thing going on, issues that - in real life - I could never voice, let alone discuss very easily. I am finding this slightly disturbing to say the least... and I am not even published.

I think to be published, put out in the world, must be wonderful, but I also fear that it opens the author up, not just to unrestrained criticism, but also to a somewhat more intense and intimate gaze than we may ever have planned on.

I have nearly finished ghostwriting a biography and absolutely petrifed that bits of me might show through. It's almost impossible to avoid I think, whatever the genre. Every now and again I hear my voice instead of my subject's and have to pull myself up sharp - although it helps that my name won't be on the cover of course!

Gosh, yes, I'm quite worried about this issue, as very few friends and family have read the book yet and I wonder what they will think when it comes out. I don't think the historical setting will make a difference, unfortunately.

It's interesting to hear a ghostwriter's perspective, Helen.

i do love the idea of following a writer's themes as revisited through his work--that no matter how different the various plots, settings and characters, the underlying philosophies might give me honest insight into what's important to this person. almost like a serial killer's signature, isn't it? :)

My dad has just read my book and chuckled many a time at the odd line that he thought was autobiographical and reminded him of something from my life. And sometimes he was right. But i don't think this matters, part of your life experience is bound to slip through and this is partly what makes all of our writing voices different.

I think the problem is if you base your plot and characters soley on a period from your life,which is the cliched thing for new writers to do and is what i did with my first novel, many moons ago.

I read an analogy once where it said writing is like buying an old house. Turn on the tap and let all the brown crap run out (ie this is you writing about your life) - once you've got this out of your system, the good stuff, the clear stuff, will start to flow out.

I think this is very true.

I think this is all fascinating because I once had a WF novel rejected on the basis that, 'it's so obviously autobiographical....you need to find a different story to tell.' I was flabbergasted because nothing in that story had ever happened to me, and the MC was completely different in every way. It would have been a funny twisted compliment, if it hadn;t been a rejection :-)

That's very annoying, Caroline! How presumptuous of them...

Interesting about the ghost-writing angle - I suppose it's impossible to totally stop your own voice from slipping through, even in that context.

I like your analogy, Sam, although I don't quite understand the role of the tap in house-buying!!

Oh, all so very true, Becky! What an interesting post.

When my brother read my first novel and I asked him what he thought, he said, 'Well, it's hard to be objective about it when it's clearly so autobiographical.' I was completely bemused - it's about an obsessive letter-writing nutter who ends up in bed with her Labour MP!

When my dad read a draft of my second book he mentioned the main female character - 'What's-her-name', he said, 'the one who's you.' Again, to me, any resemblance was very far-fetched. I find her unbearably downtrodden and martyred - not the way I se myself at all!

But of course, they are us. Main characters, minor characters, the wicked villainess - at some level, all us!

I'm really looking forward to reading The Art of Losing, Becky! Should be arriving any day now....