Whatever happened to the Strictly Writing Award Winner? Carys Bray returns to tell us all!

I wanted to be a writer when I was a little girl, but I married young, had several children in quick succession and the dream got buried somewhere - probably under a big pile of dirty nappies. I started writing again as soon as my children were at school. I did a writing module during my Literature degree with the Open University and then I decided to do a Creative Writing MA.

I entered one of my early MA stories in the Strictly Writing Award competition and I was tremendously excited when I won. I was just beginning to think that perhaps, one day, when I’d had a lot more practice, I might actually be able to call myself a writer.

I kept writing stories after I’d finished my MA and I soon had enough to make a collection. I heard about Salt Publishing’s Scott Prize, the only international prize for debut collections of short stories written in English, and I decided to enter. I was delighted to be shortlisted and over the moon to win.

My collection, Sweet Home, is full of stories about family and the things that go right, and wrong, when people live together. Some of the stories are sad, some are funny and some are best described as fairy tales. 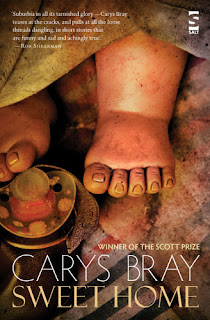 Lancashire Writing Hub guest editor Sarah Schofield reviewed Carys Bray’s Salt Scott Prize winning short story collection Sweet Home here: she says "...The collection is titled after the third story in the book. This decision is well measured. ‘Sweet Home’ is an updated twist on Hansel and Gretel. Playing on the original narrative, it highlights discrimination, racism and small community gossip. Refering to the foreign woman’s gingerbread home, one zenophobic character states: “She should have used an English recipe… Victoria sponge… You can’t get more English than that.” It seems more than appropriate that the Hansel and Gretel narrative, so ingrained in family life and read to generations of children, should have a re-evaluation and hold an important place in this collection. Challenging established expectations of what ‘family’ looks like...."

I get inspiration from everyday things. A couple of the stories are set in shops; one in a surreal store where people can buy children, and another in a midnight supermarket during the rescue of a group of Chilean miners. I read a lot of parenting books when my children were small and, over time, I developed a hatred of them. The opening story in the collection deals with that hatred - it is interrupted by ‘helpful’ quotes from fictional parenting books. I really like fairy tales and I think they have fuelled my love for short stories where impossible things happen. In one of my stories an old lady builds a gingerbread house and in another a carpenter sculpts a baby out of ice.

I like to read stories that are funny and sad, probably because real life is often both of those things. I like beautiful language and I also like to be surprised. Some stories I have really enjoyed recently are ‘Sports Leader’ from Jane Rogers’ new collection Hitting Trees With Sticks, ‘Sometimes Gulls Kill Other Gulls’ from A.J. Ashworth’s debut collection Somewhere Else, Or Even Here and ‘Tamagotchi’ from Adam Marek’s new collection The Stone Thrower.

I’m still writing short stories, although at the moment I’m mostly concentrating on a PhD and novel. I’m nearly at the end of my first draft of the novel. It doesn’t have a name yet, but it’s about the sudden death of a small child and it’s full of fairy tales and misplaced faith in the miraculous. It’s sad, but I hope it’s funny too, just like real life.

To find out more about Carys, you can find her blog here:  http://carysbray.co.uk

To win a signed copy of 'Sweet Home', simply tell us which traditional fairy story YOU'D like to give a modern twist and why.  Leave your idea in our comments box  and we'll announce the winner next week on Strictly Writing.

Many thanks to Carys for coming back and telling us all about her rise to publication fame - we're so proud that we were able to play such a meaningful role in her success story.

I would love to rewrite The Little Match Girl. That poor little mite needs to get revenge. Matches. Need I say more?

Sleeping Beauty is my pick. A girl sleeps for a 100 years, and then wakes up and marries the first prince she meets, and has no problems dealing with the world? What about her family? How does her body react after 100 years of coma? And what if she doesn't want to marry the prince, even if she is grateful to him for waking her up?

I'd go with Bluebeard. Man hides a collction of dead former wives in a locked room - then sets up the next wife to want to unlock it... Creepy in extremis. I'd like to combine it with Mr Welcome and his bizarre collection of other objects: articificial limbs, mummified children, sex toys from other cultures. I guess that's not totally updating as I think he was ictorian/Edwardian (he left behind the Welcome Trust in London - it's great musuem). Something about certain men's obsesssive natures and a woman's resistance to it...

Great post. I'd have a crack at updating The Emperor's New Clothes I think. There's no more relevant fairy tale for the age we live in.

Great stories,Carys-really different.Ive just re blogged an edited version -these stories have to be shared!

Ooooh - some really interesting ideas. I like revenge of the Little Match girl! Sleeping Beauty is actually quite a horrible story, isn't it? And Bluebeard is seriously disturbing - I wonder what gender reversals of those two stories would look like? I like the Emperor's new clothes idea, too. Children so often see through things that we just accept as adults.

It's a bit cliche but I'd go with most of the stories from the Bible. I think perhaps the wedding at Cana because it has such rich possibilities for humour - think of a person who has crashed a party, tells you a load of 'crazy' stuff about higher purposes and things no-one understands but, despite being a weirdo, it's the best night you've ever had. Almost magical, some might say...

Hi Carys, and congratulations on your emerging path as a writer. I think that fairy stories are a great way to introduce children to the power of myth and the importance of imagination.

I would rewrite the Princess and the Pea = I'd make her a reality TV 'star' and include a debate about organic vs GM crops!

Good luck with the novel and everything else. Not sure if strictly speaking it is a fairy tale but I've always been fascinated by the story of Icarus and I'd like to rewrite that emphasising how he flew, high and handsome, before he fell.

Your book sounds intriguing. I think it would be great to give a modern twist one of Aesop's Fables, particularly the Tortoise and the Hare.

Thanks Carys for popping by and telling us all about your path to publication. I read one of your stories on the link and loved it (Ice Baby I think).
If I may, I'd like to put forward the story of the Boy Crying Wolf and what happened to him as a Man. I think I might have met him someplace :)

I was supposed to decide which scenario I liked the best, but it was very difficult as there were lots of delicious ideas and I couldn't make myself pick just one. So I cheated - I'm afraid I drew one at random.

And the winner is...