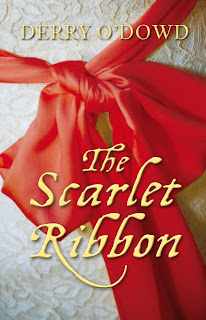 First of all, thank you to Gillian for inviting me to a do a blog post. When she asked me I was completely stumped as to what to write about. I didn’t want to talk about myself, I mean really, what’s to know? I juggle as we all do, in my case with children, day job and writing.
I didn’t really want to write about writing either, I’ll leave giving sage advice to people more qualified and widely published than myself.
I’m happy to give a little tip, though, one which helps me to write more visually.

I write medical historical romantic fiction, with my Dad (a doctor) as Derry O’Dowd. When writing by myself I also favour historical fiction.
You know the old saying, ‘a picture tells a thousand words’? Well, I’ve found it really helpful actually, when writing about events – made up, true – which took place hundreds of years ago.

I read a lot while researching, but when it comes to sitting down to start writing I use pictures to help me along. For example, the main character in The Scarlet Ribbon James Quinn, took the form of an Irish actor whom I really like, which helped no end in describing how he looked at various stages of the book. A painting of a landscape. A dress or outfit from the era – you get the idea.

It may well not be for you of course, but writing to pictures enables me to really get into a story, emotionally, descriptively. And once I have said story plotted out the first thing I do before sitting down to write – after getting a cup of tea and some chocolate of course! – is to print off some pictures from the internet or take out postcards and other images that I have collected while an idea has been brewing.

The Scarlet Ribbon has been chosen to launch the History Press Ireland's fiction line.
Written by father and daughter team Michael and Katy O'Dowd, the book follows James Quinn, a young Irish surgeon battling prejudice, suspicion and personal demons in his controversial quest to change the face of medicine.

Following his marriage, tragedy strikes, thrusting James into a life of turmoil and despair. Throwing himself into his work, the young surgeon eventually begins to find solace in the most unexpected of places. From the backstreets of Paris, through the glittering social
whirl of London and finally back to Ireland again, this is a story of the thorns of love and the harsh reality of life in the eighteenth century, where nothing is simple and complications of all kinds surround James Quinn, man midwife.

The Scarlet Ribbon is widely available in bookshops and online.

Katy is an arts and entertainment journalist and has worked for Time Out, Associated Newspapers and Comic Relief and her articles have appeared in The Times (London), Metro (London) and many other arts and entertainment publications, paper and online. Alongside writing under the pen-name Derry O’Dowd, whose next book she is working on, she writes under her own name. ‘The Lady Astronomer’ will be out with Doctor Fantastique Books in April/May. She is also reviews movies for STUDIO magazine, and is currently co-editing ‘Nasty Snips II’ a horror anthology which will be out with Pendragon Press at Halloween.

Thanks, Katy for guesting on Strictly! I write to pictures too, and like you, my MC in my forthcoming book is based on an obscure Irish actor. It wasn't how it started though - I put together a set of character traits and he popped out!

Good luck with The Scarlet Ribbon.

Speaking of pictures - what a gorgeous cover! Great post Katy - but I find myself off-topically intrigued by the father-daughter writing dynamic. I'd love to hear more about this! Have you written about it elsewhere?

Thanks, Katy, and ditto to everything BarJoker said about the father/daughter writing relationship - and the beautiful cover!
Susiex

Thank you all!
There were questions about the father-daughter writing dynamic at the launch earlier this month, but apart from that haven't written about it elsewhere - am open to guest blogs should anyone wish to pursue the topic further :)