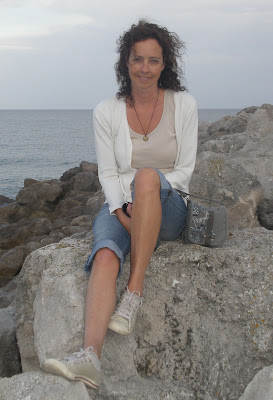 Kate Kelly has had a number of short stories published in the SF and horror genres but is now concentrating her effort into writing children's fiction. She is represented by Julia Churchill of the Greenhouse Literary Agency. Kate lives by the sea in Southwest England and keeps a blog at http://scribblingseaserpent.blogspot.com/

The Strictly team have invited me along to tell you about how I managed to escape the slushpile and find myself an agent.

You see, it all began with a comment I read on this very blog.

Wind back the clock to February 2010. There I was with several short story publications under my belt but, despite a couple of close calls, a fairly respectable pile of rejection slips for my children’s novel.

However, I had a new novel on the go and this one, I hoped, would be different.

I spotted an interesting blog post on one of my favourite blogs (this one) about avoiding the slushpile, and some interesting comments followed about networking. Inevitably the subject of writer’s conferences came up - and someone mentioned that agents often give one-to-one consultations at these.

Interesting, I thought. Were there any near me? The answer came back, Winchester and Frome. And then someone commented that Rachel Ward, author of the bestselling ‘Numbers’ trilogy, got her deal with Chicken House through one of these Frome Festival consultations.

Well Frome was nearer (and less expensive). So Frome it was.

I booked my slot with a very reputable Children’s agent. At the time the thought of her signing me was the last thing I expected. Of course I hoped. Don’t we all?

What I really thought I would get out of my slot was an idea about the marketability of my story, trends in the children’s market and any indications as to where I might be going wrong. The way I saw it, this could only be a positive experience. She was to be the first agent to see it, and therefore I should be able to make any major changes before I started sending it out…

Of course things never work out the way you expect.

So thank you Strictly Writing, for being such a useful and informative blog, and to all the people who left those helpful comments.

And for those of you who are looking for agents, remember, it does happen. Be on the lookout for any opportunity and grab it when it comes along.

Thanks for this, Kate - we Strictlies are delighted to have been 'involved' in your escape from the slushpile! And very best of luck with the book.
Susiex

That has quite made my day! How wonderful to know that reading the blog helped. Many congratulations, Kate and thanks so much for guest posting today.

Wow, that's amazing Kate - it must be so thrilling when it happens - well done ! :)

Congratulations, Kate. What you say is so true - grab your opportunities with both hands and sometimes things really do work out. I've got a very soft spot for the Frome Festival, as, I guess, have you now...

Thank you - and Rachel - loved your Numbers series!