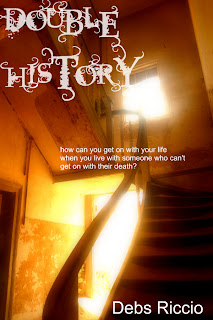 Writing for teenagers is a liberating experience.  In my personal experience anyway – which is also debateable since I don’t have anything published – yet.  See that spark of positivity? Ah, never mind, it’s gone again now.

I found that being in a *particularly stroppy, irritated, angst-ridden state of mind helped me write my first teenage book, ‘Double History’, never appearing in any good book stores near you anytime soon or - ever. My protagonist, Maddie was a victim of Gordon Brown’s recession and had to cope with not only her father losing his job in the bank but the family having to downsize and move house, and then she started seeing the ghosts of the family who’d died in the house prior to their moving in and getting stroppy with them too - I know.  You’d think it’d have been snapped up by agents and publishers before I’d even typed ‘the end’, right?

Well, no because what I didn’t realise was that agents have readers who go through plots with a fine-toothed comb and pick apart the teensiest bits that I didn’t realise would even seriously matter.
Like Matter, actually, for instance.  I didn’t honestly believe anyone reading this would scratch their teenage chin and think ‘hang on a minute, ghosts can’t be saved during a ghostly reconstruction by a living person because they’re already dead…’ (Ending No.1 scuppered).  And then, a rewrite and a new ending, let’s call it Ending No.2 also scuppered because it made the ‘hero’ (a very fit but very dead Leo) too malevolent (okay, so he tried to kill Maddie’s little brother, her best friend then her dad to get a body back into the living world – I know! I thought that was a pretty good trick too). So Ending No.3 was tried out which I thought was totally inspired, I sent Leo gently over to the Other Side whilst still allowing Maddie some romantic closure and ended the whole thing on a sunny ray of humorous hope but….. the ‘overall feel didn’t quite work’ - as Prince Charles says - whatever that means.

Was I sad?  Was I abashed?  Was I discombobulated? Yeah, a bit.  But I cut my teeth with Maddie.  She ‘enabled’ me.    She gave me another voice I didn’t realise I had and like I said at the start, writing for a teenage audience is SSsoooooo liberating.  You can even put in words like “SSssoooooo”.  It’s like that.

The first line in DH was "This sucks." - which for me not only wraps up the teenage mind in dynamic glow-in-the-dark paper, but ties a neon swirl of ribbon around it too. If you had that as a first line in an adult book you could be forgiven for assuming the MC might turn out to be a bit of a primadonna with an attitude problem.  But this is almost a given for a young adult audience.  They're allowed to speak their mind - their boundaries are still being tested after all.

And teenage issues are so nice and straightforwardly selfish.  They don’t have the worries of the world on their shoulders.  They have far less historical, genetic baggage to bother themselves about; their prime concern is Me. What colour their hair could be this week, how many friends on Facebook they’ve got right now and whether they’ve paid enough attention to the teacher to answer questions in a test or not.  Their level of popularity is important (as it always have been for teens, I remember) and the state of the country is simply something that the grown ups have got to sort out because they’re still too young to vote.

Their imaginations are not stifled by worries of mortgage repayments, energy supplier bills and threats of redundancy.  They don’t even have to work out which motorway will take them from A to B because they haven’t even started driving lessons yet. And if they see a strange apparition moving from one side of the room to the other, they WILL talk to it like it’s a new and interesting life form and not be dragged into the ruminations of whether things like should this exist or not.  Teenage writing can be as off-the-wall as you like because a teen’s life is still pretty much unwritten anyway.

And the innocence is also so life-affirming.  You know a child from divorced parents is going to love them both no matter what either of them did or didn’t do.  You know that a teen is going to be haunted by the death or abandonment of a parent or a sibling or a close friend. Even a pet.  Because it’s all about the Self; how it makes them feel. Right now.  And it’s this immediacy that I love so much about growing up that makes writing for teens such a pure, uncomplicated joy.

I love writing for teenagers too. :) Great and very entertaining post, Debs! Thanks - I really enjoyed reading it.

Loved your post, Debs! Remember not to give up!

Thanks ladies. Gillian - I'm trying not to.

I must admit that I really enjoy writing scenes from teenagers' POV.
It always feels so raw and present.

I'd love to write a book for teens, but I think my publishers might take some convincing.
HB x