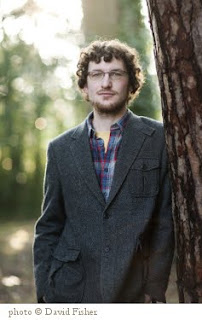 Keith Douglas, because he's my writing hero and I would love to ply him with drink until he agreed to teach me everything he knew. Similarly Virginia Woolf, who could do things with words that turn me an envious green. To ensure that the evening didn't get too studious my final guest would be Marco Polo, whose writings I've always found extraordinary. He'd surely have a few good anecdotes to tell us about Kubilai Khan and giant crocodiles.

Longhand, which is exhausting when it has to be typed up but is worth the effort. I think the physical act of making marks on paper helps stimulate the mind far better than staring at a monitor. It also helps prevent the urge to edit as you go along, which means you can better get lost in what you're writing.

Broadsheet. I have a news addiction so I need the best stuff on the market.

I wish I could say I only ever shop in indie bookshops, but the truth is I use Amazon just as much. I used to be a bookseller and know how tough times are, but I still hope there's room for both methods of book buying. Generally if I want something very obscure I'll order it from Amazon. If I want to discover something very obscure, I'll spend a delightful hour browsing in a bookshop.

I do both. I tend to be very hard on myself, but I think you need to be to get anywhere. I tend to handwrite a first draft, type it up, print it out, then go through it by hand savaging what I've already done and scribbling in new paragraphs which at the time I think are better. Then I type up all those changes, print it out again and repeat. When I'm only changing about five or six things a time I know it's nearly finished.


Plotter or pantser? [ie do you plan out all your work first or write by the seat of your pants?]

When writing The Girl with Glass Feet I simply plunged in and tried to discover the story by writing it. A more sensible and less time-consuming approach would be to plan extensively, but that terrifies me because it feels too ordered. I worry that it would suppress creativity. That said, with my new book I have planned far more. You have to find a happy balance, but if you've done all of the creating before you commit a word to paper you might never finish the book. The joy of invention is the joy of writing for me.

The Collected Poems of Keith Douglas. He's coming to the dinner party, after all...

I wish I had written…

The Road, by Cormac McCarthey, which I finished recently. It's exquisitely moving.

Indian cooking. New books by authors I love. The sea. Stepping into a dark cinema. Being alone with a pen and paper.

I hope this doesn't sound like a cop out, but I don't think I could be anything else. I don't really think it's healthy to think of writing (at least not the writing of fiction) as a career or profession. Obviously you have to pay bills and so on, but it shouldn't be conceived of as a job because it's a compulsion. If you are compelled to write then you are a writer. Even if something else pays the bills each month, you are just as much a writer as somebody who calls themselves that because they receive their income from doing it. I don't think my book would have ever been published if I hadn't had that attitude. I needed to believe that writing the novel was an experience worth having for itself, regardless of whether anybody ever read it.


An author should never…

Put writing ahead of the people they love.


Ali Shaw's first novel, THE GIRL WITH GLASS FEET, is published by Grove Atlantic. The book won the Desmond Elliott prize 2010 and was shortlisted for the Costa First Book Award 2009. He is currently completing his second novel

I must say, however, that I do worry about the notion that we writers shouldn't see our work as a profession.

The publihsing houses already try to pay most of their authors a pitiful sum, and if some authors are willing to accept this for their art,indeed almost encourage it, then trust me, the publishers will take advantage.

And many fabulous writers will simply stop writing because living in fresh air, or trying to juggle writing with full time work and child rearing is simply unsustainable.

Thanks for coming over Ali. GWGF was one of my favourite books of last year, so I can't wait to read the next one.

Great post and answers, Ali, thanks. Love the idea of Whisky as a 'snack' and thoroughly heartened to hear another non-planner letting the creative juices do their thing... good luck with the next book.

I am guilty of putting writing before loved ones. My lesson is learned, Ali!

Ah, I think that's the best response we've ever had to those questions. Thank you Ali for those fabulous answers, especially about writing as a profession and fessing up to Amazon buys. we all know we shouldn't but we all do it.