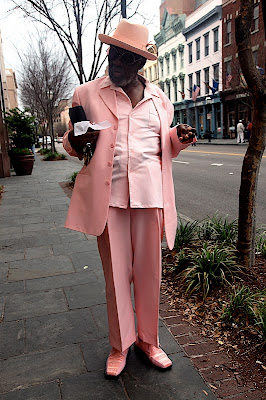 I attended a workshop recently by a successful author who gave out lots of fine advice along with this: ‘Get rid of all adverbs and adjectives. They are unnecessary. Bad writing.’ (Presumably she should have cut ‘bad’ from that description and we’d be left with the core villany: writing.)

My hackles rise at the suggestion that any word or collection of words must be outlawed. There’s no such thing as a bad word, just poorly judged use of it. Writing without adjectives would be like music without chords. It’s oh so trendy to scorn them right now, so here’s a look at what these underdogs can do for us.

When Nick sees Gatsby standing on the threshold to his mansion, he describes the man’s gorgeous pink rag of a suit. When I first read that – actually every time I read that description still - I get a sting of envy, like an electric shock, that those three ordinary words could be strung together to such effect.

Pink is genius here. Not a manly word. Not a worldly man, Gatsby. There is something naïve about him to the end, in his desire to retrieve Daisy, to be accepted by such a brutish ruling class. Pink makes him vulnerable, like scrubbed and naked flesh, but it has the suggestion also of a character stain – bit pink that Gatsby – a commie or a sissy – something one ought not be.

Rag. OK, not strictly an adjective but used here as a description – again – the word works so hard but looks effortless, like the finest acrobats. It reminds us that Jay Gatsby is common lad James Gatz – penniless and aspirant. But it also suggests the carelessness with which he now holds his wealth – oh this old rag, that probably cost the average annual wage of his blue collar family. And it finally echoes ragtime which fell out of favour at the outset of the jazz era, in which Fitzgerald writes. Gatsby is out of place.

If anyone’s still reading they may well argue that I’ve over-thought this, and I doubt Fitzgerald put the words together craftily with these meanings in mind. But well-placed adjectives radiate meanings, not all apparent but subtle and layered. To me adjectives (and vulgarity – but that’s a different blog) are the literary equivalents of spice. They can make or break a narrative voice. Over-liberal and they wreck a dish but put together carefully, unusually yoked, they have a resonant energy. (Thyme with nutmeg or juniper with chilli.)

My personal guideline on them is that I take out all the describers that amplify – that say more of the same about the verb or noun they describe. So out goes ‘tiny’ if coupled with baby. Duh. Babies aren’t notably tiny. Mostly they come out that way. ‘Old’ can’t stay in front of granny unless it’s out on special license from Andy Stanton. And so on. But describers which modify, which lead the reader away from the assumed familiar and make them see it with fresh vigour – they stay in. Colossal baby, young granny tell us a story, they make the reader ask questions of these rarer more intriguing variants from the norm. And if as readers our minds are ticking, if we’re asking eager questions, then we’re more than half-way hooked.

Posted by Susannah Rickards at 06:01

I think the advice to take out adjectives and adverbs only works at a very basic level in writing.

Sure, 'stripey tiger' brings nothing to the party but so often a well placed adjective can conjure an entire scene for a reader.

And even, now I think of it, stripey tiger might have its place when writing in deep point of view. If that's the way that character would say it, then it will add a spice of its own.

I think once you get past basic writing, these types of 'rules' have little meaning.
HB x

I agree, it's a few weak novels that give adjectives a bad name.

Excellent post - it's made me want to re-read The Great Gatsby.

I used to get paranoid about the adjective/verb advice and would go through my ms culling them, but have since learned to be more judicious - sometimes you need them!

I LOVE that three word sentence. You're right, half of it does sound like you're over-analysing something that probably spilled effortlessly from the writer's pen; but equally I ALSO re-read and re-read a beautiful description like this when I come across one. And hug myself that there are words out there that are just THERE awaiting to be put together beautifully by people like us who love them so much.
A fabulous post, and one which I shall now go back and re-read again. (Oops, have I just tripped myself up? Can I re-read something *again*? I think I'm having a 'stripey tiger' moment.)

Love this! I agree with you that we've become too comfortable dismissing groups of words and that adjectives have their place in really good writing. Thank you for this!

Yay for (well considered) adjectives! I love the ones that make you sit up in shock because they're so oddly applied, yet bring a new, striking dimension to what's being described.
Susiex

It's always a pleasure to come back to Jay Gatsby. Zach is reading it in school at the moment too. I love that book but I can't remember its plot - only the descriptions, which rely on those adjectives.

Great post, even though the title may attract unwanted attention to Strictly ! !

Great post and I don;t like the outlawing of words either. Reminds me that there is no such thing as a bad food, just a bad diet. That Observer piece where someone's shopping basket is torn apart annoys the hell out of me. But that's a different post!

hehe i love this:

"When Nick sees Gatsby standing on the threshold to his mansion, he describes the man’s gorgeous pink rag of a suit. When I first read that – actually every time I read that description still - I get a sting of envy, like an electric shock, that those three ordinary words could be strung together to such effect."

I love the pic too!

Yay for adjectives. I love them.

Goddess - I love the pic too - not quite Gatsby but that man pulls off wearing a pink suit which can't be easy.