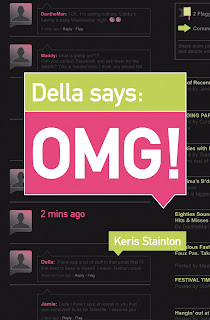 3 authors, dead or alive, you would invite to dinner.
Marian Keyes, Meg Cabot and Martha Beck. I wouldn't get a word in edgewise, but it would be fascinating and hilarious.

Email or phone?
Email, definitely. I hardly ever make an arse of myself over email like I do on the phone.

Favourite desktop snack?
I'll eat anything (so far today, I've had a fairy cake and a slice of pizza and it's only 10.15), but my favourite is wasabi peanuts. They're hard to get hold of, but that's probably for the best.
My journey to publication was...
Quite slow. I think. I signed with my agent in August 2006 and then a two book deal with Orchard in 2008 based on a book called FORGET ME NOT. After I'd signed, I went to lunch with my editor and she said she thought Forget Me Not would be better as a second book and so could I write another by Christmas. It was March and I was pregnant! It worked out quite well because I wrote DELLA SAYS: OMG! while I was on maternity leave and delivered the book a couple of weeks before the baby.
Age-banding is...
Harmless. I know that's not a popular opinion, but unless I'm misunderstanding something, it's just a guideline, no-one's going to prevent children from reading outside the suggested age, so I don't quite see what the problem is.
As a child, I read...
Constantly. I was obsessed with Enid Blyton, of course. The Faraway Tree and Malory Towers series.

An aspiring author must never...
... be discouraged by the success of other authors. I used to be in a writers' group in which a lot of people were threatened whenever anyone signed a big deal. As if there's a finite amount of book deals, which is not the case at all.
Literary prize or Hollywood deal?
Oh god, Hollywood deal, no question. Wouldn't most people rather go to the Oscars than the Booker Prize presentation evening? You're much less likely to meet George Clooney at the Booker.
The worst thing about writing is...
The self-doubt. It's so hard to know if what you're writing is any good at all. And then, of course, even if you think it's great, there's a chance no-one will agree. It's all so subjective.

Hacker or Adder, on the edit?
Ha. Well, I used to be neither. I used to be frightened of touching anything at all in the edit. I'd just move the odd word around. It was only when I was doing a second draft of DELLA that I realised if something wasn't working - and it wasn't essential for the plot - I could just cut it out instead of faffing about trying to make it work. And then I got a bit giddy with the hacking. I actually chopped the last 5000 words off the adult novel I'm working on and then realised I had to put most of them back in again.
You really must read...
Anne Lamott's Bird By Bird. Doesn't everyone say that? It's such a brilliantly inspiring book about writing and about life. And it's very funny too.
A word from Keris to end...
I've been making up stories for as long as I can remember, but I didn't manage to write a novel until 2004 when I took part in National Novel Writing Month. I haven't quite finished that one yet, but I have finished a few others (Della Says: OMG! is the first to be published). I live in Lancashire with my husband and two young sons, who make me laugh every day (sometimes intentionally).
My website is http://www.keris-stainton.com and I'm @keris on Twitter.
Buy the book on Amazon 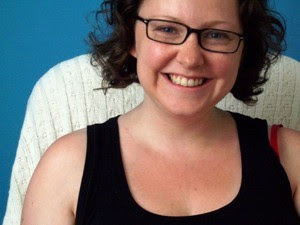 Posted by Administrator at 09:12

Great answers, Keris. I'm with anyone who can eat a fairy cake and pizza before ten.

Great interview, Keris! And yay for NaNoWriMo, which I'm so happy you persuaded me to do. Congratulations on the release of Della Says: OMG!

Masses of good luck, Keris! Big respect on writing the book under such pressure!

Great job, Kerris.
Good luck with everything.
And move away form the pizza...
HB x

*Drools* - pizza - it's so easy to have a slice of pizza for breakfast. On a day off, I indulge in this too! Veggie thin and crispy....

And Malory Towers - I have the whole series - what a great read :)

Thanks for the informative answers!

And thanks for the advice especially for aspiring authors.

And of course who wouldn't want to meet yummy Mr Clooney??

What a lovely interview - thank you! Is Martha Beck the one who wrote Follow Your Own North Star? I've been meaning to read it for years now...
Susiex

Thanks for the lovely comments, everyone.

Susie - yes, she wrote Finding Your Own North Star, which changed my life (honestly). The Joy Diet (which isn't a diet) is great. As is The Four-Day Win (which *is* a diet). I love her.