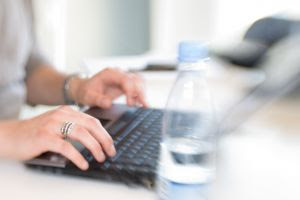 Hi, my name's Anna Reynolds and I'm one-third of the team behind WriteWords, one of the UK's most successful and popular writing sites. We set out to create a real community for all writers, from beginners to experienced, across all genres and media, and we're excited by how diverse and lively the site has become.
My WriteWords colleagues are David Bruce, the Webmaster, and Richard Brown, a non-fiction writer, who is our Directory Editor. One day back in 2003, the three of us sat down in a pub- as you do- and decided we wanted to create the kind of site we'd like to be part of ourselves, something very friendly and accessible, but also with great info, jobs for writers, interviews with The Great and the Good, and lots, lots more.
It's exciting to follow what goes on within the WriteWords community - some members have started out with us at a very early stage in their career, and gone on to get major publishing deals; other times there are really interesting debates and discussions on the site - which, unlike a lot of sites rarely end up in pointless bickering and in-fighting. I also love it when writers help each other- my experience as a stage writer is that we're an isolated bunch, working in our own spaces, not really sharing what we do and often feeling intensive rivalry- but I think WW writers are incredibly supportive and helpful toward each other, and great at sharing and swapping advice, opinions and info.
We're constantly looking at how we can maximise links with publishers, agencies, magazines, theatre companies and others- sometimes that happens organically, for example we recently ran an interview with a new travel publisher, city-lit, who have already begun working with several WriteWords members as a result. Sometimes it works like that- we see an opportunity and seize it, sometimes it comes through an existing WW member who wants to draw their own publisher or agent or editor into the WW mix. Because the web is such a fluid animal, constantly reinventing itself, the possibilities are endless. But the core of WriteWords is, I think, the community- the groups and the forum and the archive, that’s the biggest and most fantastic place for networking, both casually and more formally.
When I'm not running WriteWords, I'm a theatre writer with over 20 plays produced across the UK and internationally, and I've also written for magazines, newspapers and short story anthologies. These days I tend to focus on collaborative theatre, writing with and for actors, designers, directors, circus performers, singers, composers, dancers, you name it. Sometimes this works and is extremely exciting, other times it drives me to the point of madness. I've got three fairly big plays to write which open in June, July and August respectively, so that'll be fun. In fact, I’d better get back to writing them right now…
Posted by Administrator at 06:00

Thanks, Anna. I joined WriteWords about two years ago and have found it invaluable. Just knowing there are other writers there for virtual company, critique and support is so helpful. One thing that really stands out is the willingness of published writers to offer advice and help. And also, watching people moving from aspiring to published can be very inspiring.

Hi, Anna! Strictly has WriteWords to thank for its existence, as you know! I've met some great people on WW both on line and in the flesh. It's great, as you say, as an isolated writer, to have a friendship group you can turn to in your working day. And you're right, though there's the odd spat, we've matured over the years and most of the discussions nowadays are really fruitful. The support offered by other writers is selfless on some people's part and the laughs we have are amazing. Thanks for starting WW!!!! I for one would be lost without it. (Though I might get more work done!)

Yes, WriteWords has been a godsend to me and i'd recommend that anyone takes a look.

Although it is far too tempting at times and periodically i take a break to get work done.

It has given me a degree of confidence about how publishing works, so if i ever get that deal i hopefully won't feel like a complete muppet when talking to people in the biz.

I need a word with you Anna...I spend far too much time on WW and I blame you for helping create such a brilliant site :) :) :)

There really is nothing quite like it and I've not only made some fantastic friends, I've learned tons about writing along the way.

Hello, Anna - I found WW by chance. I was thinking one day, 'there must be other people like me, writing in a vacuum but desperate to talk about writing to people whose eyes don't glaze over at parties' - and a quick google search found me Writewords. I love it. It's become part of life - rather too much so at times - and I've met (virtually, and in the flesh) some lovely, interesting, helpful people. So, a big thanks, and so glad you had that chat in the pub.

I like write words so much I acknowledged them in my second book.
Really, it is a great place to chat, mull thigs over, rant, moan, celebrate.
It's like the Bloomsbury Set for the digital age. Only with more swearing. And less furrowed brows. And no fox fur...

Yes, WW has seen me through triumph and disaster, and I'm deeply grateful to it for all sorts of things, from important friendships and invaluable information to a lot of laughs (and, yes, admit it, a lot of procrastination. But, dammit, it's a more fruitful procrastination than rearrangin my CD collection)

I also owe WW large chunks of the thinking in my Creative Writing PhD. Much of what I say was first thought out on the WW forums. And I also owe WW lots of insight into how other writers tick: it's easy to assume that what's right for you is How Writing Works, and of course it's nothing of the kind. That insight (I hope) makes me a much better and more flexible and understanding teacher.

Thanks from me too, Anna. I've had some really useful feedback from people in the writing groups at WW. I've met some lovely people too. It's a great site.

What a great site with so much info and help! Many congrats on making it a success :)

I love Write Words too. It is just what you say you set out to create. I particularly like that it isn't just literary or a specific genre of authors attracted to the site but a rel spread, so there is such diversity of opinion and suggestion. And yes, the feedback from the experts is invaluable.

I honestly don't think I would have got published without WriteWords - it's fab! It's been really encouraging and I've made some lovely friends over the past few years that I've been a member.

Thanks Anna, and thanks for WriteWords too - it's not overstating the case to say that feedback and advice from WWers was instrumental in me getting my book published (or at least to a publishable standard). It's things like WW that make me wonder how we survived before the internet ...

I'm ashamed to admit I'm not a member, but after reading all of this, WW will be my next port of call!

Look out for us on there, Lydia!

How on earth have I managed NOT to find Write Words? After reading your post and everyone's comments, I will now head straight over ...!

WW is great, as everyone who has been on the site knows. I also wonder, can you be one of the few social networking sites actually turning a profit? I was just watching a BBC business report about Facebook possibly being about to make a profit in 2010, which is what put it into my mind. Obviously WW has far fewer members than FB and no advertising (except that Google thing) so perhaps not, but it did make me wonder if the future for social networking might not be to go specialist. I pay for WW because it gives me a chance to connect with people who have the same interests as me, and it feels well worth it.

Anna, I think its safe to say you're amongst friends! The day I stumbled across WW was the day my real writing career began. I have met, virtually and in person, some fabulous like minded people and some loons like me too! A truly fantastic resource for all writers.

Do you even speak English? Seriously, wall of text crits me for 99999k.

Wow, that's crazy man. They should really try to do something to fix that.

Nice post, kind of drawn out though. Really good subject matter though.