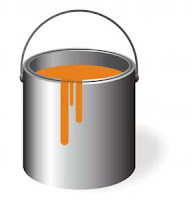 Yesterday, I painted the bathroom. It’s been something I’ve been putting off for ages, but finally I went to B&Q, carefully chose the shade and spent the afternoon, roller and brush in hand. My husband’s response last night? A raised eyebrow and then silence. My daughters?
‘Mum, why did you paint the bathroom the colour of poo?’ she said. This remark was followed by a quick smirk from hubby and my curt reply – ‘It’s the colour of ‘Iced Frappe’ actually...’

Apart from the fact that I seriously believe she needs a doctor if her poo is the same shade as the bathroom wall, it did highlight the whole question of taste and subjectivity.

If I had a pound for all the times I’ve heard ‘You can write’ only to have it followed with the word ‘but’. .. The ‘but’ is followed by a ‘just not for us’ type remark. In other words, in my head I’ve been writing Iced Frappe but the fact remains - others see it as poo?

I imagine paint firms employ cool hunters and trend setters to come up with the next big thing in the paint world. Then having mixed their mix, they call it a trendy new name. Gone are Autumn Leaves and in with Cappucino, Nutmeg, Iced Frappe and Flaked Cinnamon. But when all is said and done, it’s all brown paint innit? Likewise with writing. You can write a best- selling time slip novel but strip away the layers to boy meets girl and it’s a love story. Or you may write a series of books about a family of human friendly vampires in a sleepy American town. Strip away those layers and it’s a love story with a little obsession thrown in.

I’ve spent years obsessing myself when it comes to my writing. Have I tapped into the zeitgeist? Is my story commercial? Lately and especially with my current WIP, I’ve gotten back to writing for writing’s sake and I’m loving it. I’ve avoided throwing an angel into the mix as they’re apparently the new vampires. And yes, underneath the layers of what I hope are interesting characters, it’s a love story.

So, years on, I think I’ve got something figured... It’s all brown paint. Some agents, readers, editors will see what I want them to see, Iced Frappe. Others will think my work isn’t current, reading in shades of Autumn Leaves; others may see a sparkle of Flaked Cinnamon.

And yes, though I hope to avoid them, despite my new found confidence in what I do- some will simply see poo... It’s the way of the wonderfully diverse world we live in.
Posted by Fionnuala at 06:00

This was such a brill post. Love, love, loved it.

Here's to an agent spotting the true iced frappeness of your ms soon.

My in-laws favored a wall color called "Sahara" which is a light brown. They liked it because it didn't show the dirt. So essentially, they were painting their walls the color of dirt so they wouldn't look like dirt. Still, some people like dirt.

A great post that makes a valid point. In the end, we write how we write (or decorate) and where we can, we need to choose our audience carefully.

Poo-ty is in the eye of the beholder.

My daughter said exactly the same thing when I painted our landing in Intense Truffle.

It truly is in the eye of the beholder, but I agree that writing something you enjoy is much more fun than writing for the market - which is bound to have changed by the time we've finished anyway!

Fi - nothing beats Russian Velvet! It makes a room look like a crime scene. It's very Amityville Horror!

Erm, why are you painting your bathroom wall the colour of poo - I mean Iced Frappe - when you're about to move out??? Is this some demonic sadism on your part towards your hapless buyers?
Susiex

Thanks everyone for your comments. x

You do brown beautifully!

thanks Debs for a good laugh on a totally grey (or should I say Burnished Pewter?) kind of day. Suspect there's much fun to be had in the Language of Paint Charts. Might go out and get a few to get my mind working!
AliB

Come a bit late to this one but brilliant post: don't you just love pretentious paint titles! Spot on with the analogy though and remember it only takes one person to spot that iced frappe!