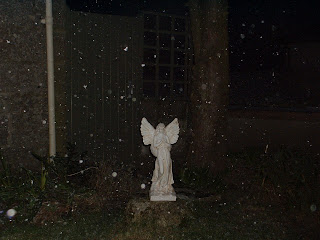 Okay, no preamble, no beating about the bush.

If you're still stuck for a present for the reader in your life, here's a selection, written by your very own Strictlies, to fill that special someone's stocking. (Other legwear is available.)

Because even writers need a Christmas dinner. (Other festive meals are available.)

Dead Good by D A Cooper
What would you do if your dad lost his well-paid job and moved you and your family out of the loveliest house in the world and into the scummiest part of town?

What would you do if you suddenly found some random (but very gorgeous) guy in your bedroom – uninvited?

And then what would happen if it turned out he wasn’t breathing?

Maddie Preston is about to find out…
http://www.amazon.co.uk/D-A-Cooper/e/B007J3RWD4/ref=ntt_dp_epwbk_0

Let's Go Round Again by D A Cooper
Casey Summerfield's leaving home. Nobody understands her and she needs to be somewhere else.

Trouble is, she isn't expecting 'somewhere else' to be 1979 and the place to be her own teenaged mother's bedroom.

Now how the hell did that happen and why is she there?
http://www.amazon.co.uk/D-A-Cooper/e/B007J3RWD4/ref=ntt_dp_epwbk_0

Re: Becca by D A Cooper


If technology was helping you stay one step ahead of the school bullies, what would you do if you were suddenly disconnected?


Becca thinks her life is over but could it be about to start?
http://www.amazon.co.uk/D-A-Cooper/e/B007J3RWD4/ref=ntt_dp_epwbk_0

Dark Ride by Caroline Green
A mysterious boy. A haunting secret...
A shiver crawled up my spine. It felt like the loneliest place in the world. For a second I thought I caught a snatch of music in the air, but it was just the wind whistling  through cracks in the fairground hoardings.
My instincts screamed, `Run away, Bel! Run away and never return!'
But instead my fingers closed around the ticket in my pocket. ADMIT ONE.
Bel has never met anyone like Luka. And the day she follows him into the abandoned fairground, she is totally unprepared for the turn her life is about to take.
http://www.amazon.co.uk/Dark-Ride-Caroline-Green/dp/1848121385/ref=la_B001KMINU6_1_1?ie=UTF8&qid=1355671247&sr=1-1

Cracks by Caroline Green
"I'm shaking all over. My brain feels like a computer whose hard drive is full. I can't take any more weirdness - I haven't got room in my head. I look around the kitchen and I know something is different but I can't put my finger on it."

Cat's discovering that his life is not as ordinary as he thought. That's scary. Particularly when it seems he's the very last to know. He needs to find out the truth - but, with lies, danger and deceit on all sides, is there anyone he can trust?
http://www.amazon.co.uk/Dark-Ride-Caroline-Green/dp/product-description/1848121385


The Making of Her by Susie Nott-Bower
Set in the pressure-cooker world of television, The Making of Her is a blackly funny retort to a society which values youth over age and appearance over experience. The Making of Her is the makeover programme that Clara never wanted to produce, featuring the one person she never would have chosen.  Add to the mix an errant husband, a barefoot counsellor and a reclusive rock star and change is inevitable.  Will transformation come from the inside out, or from the outside in? And will The Making of Her prove to be the making of them all?
http://www.linenpressbooks.com/shop/the-making-of-her/

Kill-Grief by Caroline Rance
Chester, 1756
Mary Helsall does not like being a nurse. The hospital stench. The blood. The lecherous surgeon. It’s a job that will have to suffice for now. At least until she has achieved the task she came to the city to do. In the meantime, rotgut gin and a volatile relationship with hospital porter Anthony will help her get through each day.But who is the mysterious patient who claims to know what she’s got to hide? He knows all about her infatuation with a thief-taker, about her connection to the notorious Northgate Gaol, and about the shocking events of her recent past.
From the stormy seashore to the screams of the operating theatre, and from a backstreet gin shop to the fetid dungeons of the prison, Mary searches for an independent future.
Before she can find it, she must fight the attraction of oblivion and make a choice between duty, money, and a love overshadowed by addiction.
http://carolinerance.com/buy/

The hunter just wanted to be left alone - one last drink before leaving London forever. Then the vampire Laclos walked into the bar, and suddenly his night wasn't looking so quiet after all...  There's a new hunter in the city and he's targeting Dark Dates - the vampire/human dating agency run by Cassandra Bick, who also happens to be the woman that both Cain and Laclos love. These two fierce rivals must work together to stop him before he drags London’s vampires into the spotlight and destroys Cassandra’s life – that’s if they don’t kill each other first.

Explore a darker side of London with this exciting short story from author, Tracey Sinclair. The first novel in "The Cassandra Bick Chronicles", "Dark Dates" is out now.

The mist clung to my face and I felt a cold resolve settle in my chest: my decision was made – he had to die.
http://musapublishing.com/index.php?main_page=product_info&products_id=26#.UM3vxZjeuRM


Twelve year-old Jo has never fit in at school, what with being overweight and over-sensitive. Since Dad moved out, Mum forgets who’s who in the whole mother-daughter relationship. Jo has one ambition in life: to be normal. Not gifted, or gorgeous, or even particularly popular. Just normal.
You only find out you're a butterfly if you spread your wings.

Covenant by Derek Thompson
Isca has followed the faith since childhood, taking her from the Settlements and into the City States. Now, as a priestess, a prophecy bears fruit; she receives a stone tablet to liberate her people and reveal their spiritual homeland.
In order to preserve the faith, she must be willing to teach the path of True Will to a heathen, whatever the consequences. But what if the long-awaited Righteous One isn't so righteous after all?

A mystical fantasy quest that draws on esoteric themes such as reincarnation, the tarot, the Tree of Life and spiritual truth.

Haven't caught up with your blog for ages but Susie - you've been nominated over at my blog.... Happy Christmas! x

Oh, Flowerpot, that is kind! Happy Christmas to you too, and to all Strictly readers and writers.
Susiex