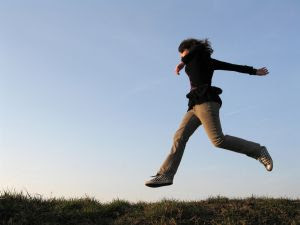 Today, winter officially begins. Evenings darken. It’s hibernation time, time to turn inwards. This week also marks the beginning of NaNoWriMo – National Novel Writing Month: when tens of thousands of would-be writers dedicate thirty days to the sustained act of writing a novel – or at least, 50,000 words of one. Whoever chose November for this mini-marathon of writing was inspired. What better time to go for it than in this dark and otherwise uninspiring month?

Maybe NaNo should be renamed NiNoWriMo (Nike Novel Writing Month) since the overarching theme is Just Do It. This is the bungee-jump method of writing. The pinch-your-nose and leap method. The kamikaze method. No safety net. No pause for thought. No gentle mulling and meandering. This is the apply-the-seat-of-your-pants-to-the-seat-of-a-chair and never-mind-the-quality-feel-the-width method.

NaNoWriMo has been criticised as a waste of time, a method of producing only the requisite number of words, rather than anything worth keeping or using. I’ve never yet done it, but I have a sneaky feeling that its detractors may be wrong.

Practice may not always make perfect, but it certainly encourages flow. Like Morning Pages, NaNo may just be a great method for undermining the Inner Critic, for storming the fortress of I Can’t. NaNo is the Shitty First Draft. No-one expects anything other than shitty. Yet without that first draft, there’s nothing to work on.

I’ve decided to give it a go. Not the official version, but my own private one, shared with a fellow writing friend. She has forty-thousand words to edit. I have forty-thousand words to write. We intend to Just Do It, and to support one another by weekly meetings and nightly phone calls. I know we will be in good company. Sebastian Faulks may not have done NaNo, but I suspect he understands the process and the point of it:

‘You give yourself six weeks. You write 2,000 words a day and that will give you the required length. Don’t stop. Don’t agonise. Don’t try to correct your prose as you go along. Don’t worry too much about the details. You can always revise them later…’

Good luck, all you official NaNos, and especially those Strictly writers and followers who are about to embark on this year’s adventure. This is one race that everyone can win.
Posted by Susie Nott-Bower at 06:00

Susie - I've been agonising over this one too.
Is it a great idea or does it degrade the craft of writing?
For me the jury's out so I'm going to just do it and test for myself.
HB x
ps if the NaNo folk read this I think you've just given them an exciting sponsorship idea. LOL.

Good luck! If you're interested, I blogged about this - both my own v positive experience of a "private" Nano with some other authors, and more recently suggesting that anyone who wanted to do the official one this year should give it a go. I'm not very good at putting links in comments but here's the recent one - http://helpineedapublisher.blogspot.com/2009/10/anyone-for-nanowrimo.html - with some comments that should encourage anyone thinking of it. And in that you'll find the link to my own experience.

Sorry but I think that anyone who thinks it "degrades" the act of writing has got an over-prescriptive and rather blinkered view of what the "act" of writing should be. For the reader, it should be about the result not the process, and for the writer it should be whatever way that writer finds best to achieve the best possible book. Whether we actually enjoy the act or process is surely the icing, a luxury - wonderful and desirable but not fundamental? I would love to get that "flow" that i used to get when writing seemed more passion than deadline, but as long as I get the book done and am pleased with the result, I have to be satisfied. (And actually, doing a nano can free that flow...)

Sending yu both tons of good luck vibes, Susie. I'm too wussy to to this. Have a complete mental block about it, but am always really keen to hear how others get on!

This November I intend to get stuck back in to the current WIP. My day job gets in the way of lengthy spells of novel-writing :( I'm not promising to knock out 2000 words a night (post-work eye-strain and tension headaches, plus a desire to watch telly), but hope to make good headway on this current novel.

LOL, Helen! Maybe they could initiate a whole new competition - Write A Novel While Running A Marathon. Now that would definitely alter one's writing habits!
Thanks, Nicola - read your blog with interest. If I can gain a bit of what you did I will be happy. Am also intrigued by the book...
Thanks, Caroline, and good luck, Gillian.
Susiex

Good luck everyone - i think i'm going to do my own private version as well. My main problem is going to be ignoring the compulsion to edit as i go along. Can't say i promise not to!

Thanks, Sam and VV! Sam, I know just what you mean - it's sooo tempting to edit as we go...
Susiex

I like this idea for two reasons. Forstly, it's just about getting the words on the page. And secondly, as an intentional first draft approach, it's private. But can I free myself up from my latest endeavour to commit to it? I suppose it would help if I had a new theme to work with!

Derek, I think timing's really important - NaNo's great if you're at the beginning of something new or need an extra boost for something older.
Susiex

Good luck, Susie! I'm a first time NaNoist too. I'm not knocking it until I've tried it. You never know where it might lead. True, it may be a complete waste of time but even if the finished 50,000 words never see the light of day - they can be polished and finished after the 30 days are up and you won't know unless you give it a go.

For me, I'm just going to enjoy the process and challenge of trying to write a novel/part of a novel.

I have already failed miserably. I have finally started (a little in advance) today and spent one hour polishing the first 175 words.

LOL, Sam! :) Just tell yourself you are preparing for the Big Push!
Julie, good luck - the way I look at it is, how can one month of doing anything intensively ever be a waste?
Susiex

This will be my third year at NaNoWriMo. I'm hoping that this year I'll be able to make the word target but even if I don't it will have provided some extra momentum to get on with my writing.

Writing can be such a lone activity that it's good to feel part of a community too.

Fi, I think that's a lot to do with it too - just knowing you are being supported by other people. Very best of luck with it,
Susiex

Susie, I'll be joining you so lets keep in touch by email? x

Yeah, Fionnuala, that'll be great.
Best of luck with it!
Susiex