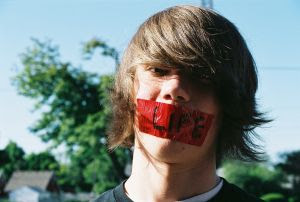 Apparently, over eight million viewers tuned in to watch this week’s Question Time and the appearance of Nick Griffin, leader of the British National Party. This is an unprecedented number, particularly at a time when the public’s appetite to hear politicians say anything about anything is at an all time low.
I watched it eagerly myself, though I’m not sure why.
Griffin sat like an over ripe Brie, all round, sweaty and unpalatable, while the politicians around him postured with a worthiness of a student union debate circa 1985. Maggie, Maggie, Maggie, out, out, out.
Mr Griffin, it turns out, doesn’t much like Muslims, and gay people, and women. Oh, and journalists. He’s not very clever and isn’t an accomplished public speaker. I don’t agree with him, or anything he says.
But I already knew all that...
Of more interest and controversy were the arguments preceding the show and whether it should be aired at all.
The Welsh Secretary, Peter Haines voiced vociferous opposition to the BBC’s invitation to the BNP, as did Ken Livingstone and Jeremy Dear, the secretary of the National Union of Journalists. Griffin’s ideology, is so odious, the argument went, that the BBC should not be complicit in allowing him to publicise it.
The Beeb, however, stood firm, saying it was not for them to engage in censorship and the rest, as they say, is history, if not very historic.
The whole episode, however, has made me think very deeply about censorship generally. How, as writers we often hold a mirror up to society and what we reflect is not always very pretty. Sometimes we say things that people do not like or want to hear.
A quick goggle search reveals a host of books that have been banned at one time or another around the world. Lolita and Lady Chatterley’s Lover are famous examples, but did you know Alice’s Adventures in Wonderland was banned in 1930s China for portraying animals acting like humans.
In Lebanon, The Da Vinci Code remains unpublishable ( no cracks please ).
For me, the whole question arises as to who should judge these things and upon what basis. I am uncomfortable with the notion of a ‘someone’ who decides such things. Ken Livingstone accused Auntie of losing her ‘moral compass’ in giving Nick Griffin a platform but who are they or he to decide what the public can or can’t hear, can or can’t read?
The subject matter of my third book is honour killings and forced marriages, and as I began researching it I realised that if I were to write a real story, one true to my own vision, I would have to say some uncomfortable things that might upset some people. I discussed the matter at length with my editor but ultimately we agreed that I should hold up my own moral compass, no-one elses.
When the book comes out, readers can decide for themselves if what I say is the truth or if I have offended.
I suppose that’s the same argument used by the sweaty cheese-man himself.
But ya know what, people aint dumb. They can work stuff out for themselves.

People can act dumb though. The Germans elected Hitler.

So are you advocating denying free speech?

Interesting post Helen. Of course the mark of a mature democracy is free speech, but I believe we have already drawn a line and differentiated between the mere causing of offence and preaching hate - some like NG might call that censorship. But I agree with Brian that we have to temper what we know about human rights with experience from history that shows how our moral compass can go awry, and protect our society.

Not saying I support censorship, but after the debate I did wonder - if NG had an effective spokesman, how keen would we all be to support his right to a platform?

I had a change of heart, while watching the Oily Cheese Man the other night. I'd been of the 'deny them the oxygen of publicity' school before then, but seeing the palpable disgust from that wonderful audience actually gave me a sense of national pride. Mind you, the Panorama programme a few nights earlier had two Asian reporters living on a v rough Bristil estate for a few months. The level of racism they experience was truly shocking, even to them. So I think we rest on our laurels about people like Griffin at our peril

BJ - that's a cogent argument but where it falls down for me is in the decider. Who decides what is acceptable to be 'out there' and what isn't.

I detest what Warsi has said in the past about homosexuality and civil partnerships, so should she have been given a platform?

I would rather everyone be given their say and the public to make up their own minds.
I'm not comfortabel with the educated elite making decisions on behalf of the little people.
HBx

Agreed - but as a democratic society we elect people (often better educated than us) to make decisions on our behalf. So the BBC can absolutely not decide who gets the platform and who doesn't, but the law can.

Of course there will be times when we don't agree with the law, or when we don't think it's appropriately enforced, but that's where the democratic process comes in, and the reason we all have a responsibility to participate.

(Cringe - not to lecture a lawyer about the law, of course!)

No, lecture away.
I do find this whole area fascinating and my views are not set in stone.
More a feeling in my gut against censorship iyswim.
HB x

Great post! I think it's when we start censoring people that the real danger emerges. Although I don't agree with Mr Clegg or his party, the only reason he's been given air time is to boost ratings I fear. And it worked.

I didn't see the broadcast. I had no interest in it. The only other reason he's gaining support is because of the mistrust the general public are gaining over politicians in general. I think some people feel the rest of the parties are no good so they'll give Mr Clegg and Co a go.

I can't speak about what Mr Clegg said on the BBC but I understand he didn't come across very well?

Let him have his say and let the people decide. It's up to the other parties to, instead of trying to censor him, upping their game and give the people if the UK want they want.

Is Clegg really a racist? Or is part of the issue how the media choose to represent him and his party? I don't know. And I don't want to know - If he is racist then it's up to the British people to show their disgust at his 'policies' and use their vote to keep him out.

But free speech is free speech - either we all have it or no-one does. You don't have to agree with the man but he should be allowed his say - just as others are free to have their say against him. To that end I think the BBC were right to have him on. If we hide something (someone) away and deny them free speech because we feel what they are saying is offensive and against the grain, then we give them power - he can play the 'victim' and get support that way. If we push him and his party underground then there's no telling what could happen. Better to have him out in the open forum and let people make their own minds up about him. If he is as 'bad' as they say the truth will out - if you give him enough rope .....

The British people aren't as 'dumb' as some people think they are. I think there's a big difference between Mr Clegg and Hitler, Brian!

But perhaps not quite so much difference between Nick *Griffin* and Hitler...? ;)

I've just been watching this on YouTube (I am British but live in the US). He really is vile, isn't he? DD looks thoroughly uncomfortable sitting next to him.

BUT while the BNP are a democratically elected and electable party I agree with Helen that they shouldn't be censored.

Whether their manifesto contravenes Britain's hate laws (and I'm sure their lawyers have been very careful about that) is another issue. (Free) speech that incites violence towards other British citizens is not legal.

Until they are found guilty of hate crime I'm sorry to say they have the right to be on QT and annoy the heck out of people like me who can only throw notebooks at the computer screen in disgust.

Well, to get back to the thing that really interests me - let's not give the OCM any more publicity - your book! I can imagine how it might rub a few people up the wrong way, Helen, and can't wait to read it.

Have you got Salman Rushdie's email address for any tips on how to cope with a Fatwa?

Where can i obtain truly great victoria secret coupons?
i'm planning to shop a victoria secret swimsuit however expensive so how shud i get a coupon online to lower the amount of money i must spend?

Are there any Blu-Ray/dvd

combo players?
I realize there are actually dvd/vcr players. Are there any players which will perform both the dvd disks together with blu-rays that I can acquire instead of just obtaining 2 individual players?