Death and the Penguin by Andrey Kurkov 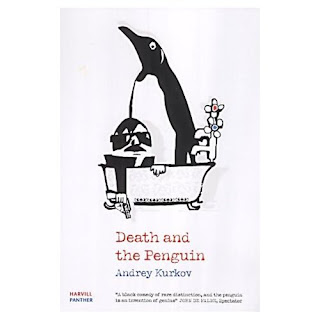 Grab yourself a bottle of cherry brandy, find a log fire, choose a cold, preferably snowy day to snuggle down with Death and the Penguin. It’ll soon be apparent why you need the cherry brandy, although Finlandia vodka would serve just as well. Put the kettle on and brew a large pot of coffee. You will need to drink plenty to keep up with the folk in this book. Are you ready for a charming experience?
That’s the word for it, and I have Susannah Rickards, erstwhile and sorely missed Strictly team member, to thank for the recommendation.

Viktor, a hapless writer of obelisks (obituaries) for Capital News is a charming fellow for a drink on a winter’s afternoon; Sonya, the four-year-old who drops into his life is charming too; Sergey, his militiaman friend is charming, and the penguin is super-charming. So often I don’t give a crust for any of the characters in the novels I read, but here’s A Group of Friends with which I’d happily share a cramped flat in Kiev.

Viktor and his pet penguin find themselves implicated in some nasty dealings without any intention or understanding on their part. Viktor’s philosophy when faced with this tricky situation is summed up as:

And life seemed easy and carefree, despite painful moments and less frequent scruples over his own part in an ugly business. But what, in an ugly world, was ugly? No more than a tiny part of an unknown evil existing generally, but not personally touching him and his little world. And not to be fully aware of his part in that ugly something was clearly a guarantee of the indestructibility of his world and its tranquillity.

Entering that little world and its tranquillity is the joy of this book. It’s a highly visual world, with all those tons of snow and bags of frozen fish and a penguin splashing in a cold bath – it’s easy to imagine that Kurkov writes screenplays.

This is a cosy read, an experience akin to sitting on a settee watching the television, something that Viktor and little Sonya spend plenty of time doing. Death and the Penguin offers the same warm indulgence as drinking coffee, or cherry brandy or sitting before a log fire. It’s for those who appreciate the simple comforts that life affords us in the intervals between the funerals. The other comfort is to have someone there, whether it’s the child watching television in the next room, the lover in the bed, the penguin standing mournfully in the corner of the room, or a stranger spotted across the pale moonlight, reading in one of the windows of the block opposite: a companion in misfortune.

But don’t let’s dwell too much on the melancholy. This book is also extremely witty. I’ve got my hand over my mouth to refrain from spoiling the fun – suffice it to say that Kurkov makes the most of the comic potential of a pet penguin and all that fish. And he does so by creating a gentle affectionate picture rather than showpiece gags. The effect is touching and uplifting without being sentimental. There’s even a short section from a new POV: Penguin’s Own View.

I was swept into the world that Viktor and his friends inhabit. Ultimately it’s a thriller, of sorts, and there’s plenty of impending threat to pull you through the story. It's also an absurdist take on existence amid the wholesale corruption and violent disregard for life in post-soviet Ukraine. I'm sure that some, reading my "cosy" comments above would say I missed the whole point of the book: the satire and the hardship and the disjointed relationships. So this is simply a personal impression from one reader. For me it was mainly fun and funny and the simple domestic scenes were the most fun: a vodka picnic on a frozen lake watching the penguin cavorting, or a New Year trip to a snowy dacha with kebabs barbecued and a tree in the garden with presents. I was in no rush to get to the action. And you don't need to analyse the politics. You can simply relish peeping through the frost covered windows into another world until you fall under the charm. Put this one in someone’s stocking and I promise they will thank you.
Posted by Roderic Vincent at 06:00

What a lovely review, Rod. I'm definitely going to look out for this one - it sounds wonderful. I'm already trying to visualise some of those fish scenarios you mentioned....

Read this a couple of years ago and absolutely loved it - it's deliciously different! (And really, don't we all wish we could keep a penguin in the bathtub??)

Lovely review Rod - will ask for this one in my stocking.

I absolutely love this book. I bought it mainly for the title, I have to confess, but the characters stayed with me for ages. I lend/recommend it to everyone!

This is definitely on my reading list, Rod. I'm ashamed to say I've not heard of it :( Where have I been?

Aw, it's so lovely when you find a book with that 'cosy' factor, isn't it? A lovely review.
Susiex