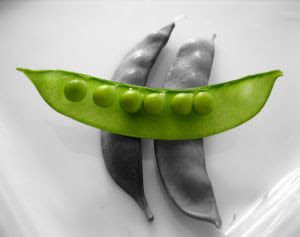 The moment when an idea for a novel comes to you is a magical one. The best ideas often seem to come out of the blue, unbidden and fully formed – a literary gift from the gods. All at once you’re inspired, enthused and raring to go. You know there will be periods when you feel like giving up, when your characters will make you feel like screaming, and when what initially seemed like nothing short of genius will feel more like unadulterated bilge. But you’ll carry on, because ultimately you really believe in that idea. You think about it out and about, hugging it secretly to you like a prize. It’s a goer. It’s a winner. It’s… suddenly staring up at you in synopsis form from a bookshelf you’ve been innocently browsing. It’s already been written. By someone else.

Okay, so we all know that there are no truly original ideas, and that it’s the subtle variations on a theme that can mark your work out from the rest… but there’s thematic similarity, and then there’s a "two peas in a pod" style carbon copy. About fifteen months ago, an idea popped into my head. It was a million miles away from the sort of thing I usually write – in fact, it was light, frothy and unashamedly commercial. This would make a change, I thought. I took advantage of Nanowrimo (National Novel-Writing Month, for those of you who have not yet experienced its joys) and bashed out over 40,000 words in 30 days. I was on a roll, but soon enough the pace slowed. I began to find it a bit of a chore, and found my thoughts drifting back to the novel which would eventually become The Art of Losing. I’ll just put this other one on the back burner, I thought. There’s no hurry, is there?!

Hmmm. A year later, I was standing in WH Smith’s experiencing all manner of unpleasant sensations as I gaped at MY book, which seemed to have inexplicably been published under a pseudonym without my knowledge. OK, I exaggerate slightly… but the plot, the hook on which the entire novel turned, and even the opening scene, were all spot on. Naturally, I bought the book (which shall remain nameless) – albeit with a wince of annoyance at lining the pockets of the author who had so cruelly snatched the concept from under my nose. And I read it. Or tried to. Reader, it was terrible. I’m not normally a book bitch, and I appreciate that in this particular case my judgement may have been slightly skewed, but I couldn’t even finish it. And believe me, the knowledge that someone else has written your book is even more bitter when you KNOW that you could have (indeed, have) done it better.

Of course I entertained wild suspicions. Had the author broken into my house and sneaked the file from my laptop while I slept? Was she, in fact, a friend of mine in disguise, eager to snatch the glory for herself? Was she… well, you get the picture. But ultimately, I had to acknowledge the fact that it was just bad luck. We don’t own our ideas, and often, we’re perhaps not quite as original as we think we are. Time to go back to the drawing board. I’ve got a new idea brewing, and I think this one could be a real winner - as long as no one else gets there first.
Posted by Rebecca Connell at 12:45

I can so relate to this, Becky. I always feel slightly ridiculous, the panic i feel that someone will nick my idea or inadvertently write the same story before me. But obviously it does happen - there are only so many ideas around.

Of course, it can have its benefits. Publishers are always looking for more of the same, if something is selling way.

I have over the years, though, felt a twist in my stomach when i've realized an idea of mine isn't as original as i thought, it happened recently.

The trouble is, us humans like to believe we are all unique and special.

Or rather, selling WELL ;)

Ouch! That must be so painful, Becky. Especially when it's badly written.
I came across a book written along the same lines as my (unpublished) non-fiction book. My heart, like yours, sank. In this case, I think the styles are different enough and the basic concept differs enough for my book to have a chance in the market, but doh! it's horrid.
Susiex

I'm actually shuddering, really this, Becky, because it's one of my big fears! Awful! Bet yours would have been better anyway.

I like the term 'book bitch'! We always think we can do better don't we! I think someone else coming up with an idea similiar to ours is an occupational hazard, but it must be truly devastating to have worked on a novel for so long and put so much time and effort in to see a version of it on the shelves at Waterstone screaming "It should have been meeeeee!"

Better luck next time, and a pox on the author who 'stole' your book!

On the other hand, people who nick my plots always do it so much better than I do, so at least it saves me writing them!...

I can understand this feeling, Becky - I discovered there was a film being made about one of the historical characters in my WIP and I was literally in tears that someone had stolen "my" character. I'm carrying on with it, though, because I think it will be a very different angle.

Oh, bad luck Caroline - but I hope your angle works out and that you can bring a fresh perspective on it.

I do think you're right, Sam, in that publishers are always keen to capitalise on the success of other books, but I suppose there's a fine line between homage and plagiarism (or what looks like it!)...

Oh - nightmare! What else can I say?

Not a lot! LOL. Still, plenty more ideas in the sea...