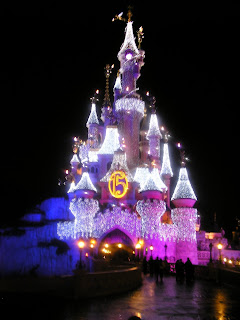 As the Strictly Writers know, I have recently returned from a trip to EuroDisney. I also visited five years ago when my children were tiny, plus in 1992 was employed as a member of the Opening Crew. So there is quite a history between me and this centre of ‘Imagineering’ and I’m grateful to it for offering me a wealth of special memories – as a single fun-seeking young woman and as an older Madame, returning to the magic with her husband and children.

My recent trip there was the first time I had visited since I’ve been writing, and it got me thinking, as an author of commercial stories – what is Disney’s secret? No other brand of theme park comes close to Disneyland’s global success, what with the visitor numbers and merchandising revenue created by the gigantic park in Florida, plus the other three in California, Paris and Tokyo.

What struck me, on my arrival at the resort all those years ago as a young employee, was the seriousness of the Disney officials. I used to call them The Mafia, with their black suits and radio ear pieces. Our first days were spent at Disney University being drilled with the great Walt’s ethos. ‘Problems’ were called ‘opportunities’ and the words ‘not possible’, did not exist. Expectations were high and negativity stamped out. Mickey’s glass was always half-full and as employees we had to stick stringently to the Disney commandments and rules. We had to believe in our job. And everyone did. From my manager who’d left his $200 an hour job as a lawyer in the States to work at the resort, to the man testing Thunder Mountain after one of the previous dummy-runs had resulted in the prosthetic passenger being decapitated.

Then there was the attention to detail. The grass was sprayed green, just to give it that edge. I discovered that artefacts were sourced from around the world to furnish themed parts of the park, instead of purchasing cheap imitations. And when drinking after work with the ‘Cowboys and Indians’ from Buffalo Bill’s Wild West Show, I found that most had grown up on ranches out in the States and lived for real the life that they were re-creating on stage – they weren’t just horse-riding actors.

Of course the ride’s the thing at the Disneyland parks and each one tells a cracking good story, whether it’s the Peter Pan Flight or intergalactic excursion on Star Tours. And they are innovative. Exciting. Scary. Heart-warming. They reduce you to tears or screams, to sighs or laughs. They move you physically and emotionally. They force you to take part.

So, as a writer of commercial fiction, what have I learned from this?

1) Set yourself high standards. Don’t see rejection as a ‘problem’, but as an ‘opportunity’ to take on board criticism and improve. Surround yourself with like-minded, positive, ambitious people.

2) Pay attention to detail. The things you may not consider important WILL matter to your readers and editors and publishers. Don’t be sloppy with anything, from your characterisation to your grammar.

3) The story’s the thing. Write something different which, at the same time, gives the reader what they need in terms of being able to empathize and get emotionally involved. Give them something memorable. Make them laugh. Make them cry. Make them part of the journey.

Posted by Administrator at 21:44

How exciting! I've never been to Disney but I know I'll be taking my daughter some day - not America, can't afford that, but the Euro one. Has anyone been to Euro Disney is it any good?

You're so right about paying attention to detail - editors won't take you seriously if you make mistakes in your manuscript.

I also agree with you on setting yourself high standards and not being put off by rejection. If you work hard at your writing and keep up with what the magazines/publishers/editors are taking by reading the magazines you want to write for, and the kind of books that you want to write, then you will have a better chance of being published.

Thanks, Julie. Yes, EuroDisney is great - we're already saving to go back:)

I remember when i first started writing, i had this idea that editors would sort out any grammatical problems etc - which they probably would. But i think nowadays, just to get that first foot on the ladder with a magazine or agent or whatever, you have to make your work as topnotch as possible. Even if it does mean an unhealthy obsession with commas:)

A great analogy for striving for excellence. I worked for a very large American I.T. firm for 25+ years and problems were opportunities etc. Very different to British business management who were typically reserved in their approach.

Ahh, what a lovely post. But any advice, Sam, on using this analogy when you are a loather of rides and theme parks? I am a terrible wuss and those places more or less set off an anxiety attack just thinking about them! My poor children have so far been denied the pleasures of Eurodisney..
I like the way you've linked these themes...great stuff.

Thanks, MOB - yes, the ethos is totally different in an American company, isn't it?

Thanks Caroline. Well, i'd suggest that going on a ride is like submitting work. You've just got to do it. It can be scary, or bring happiness. Either way, when you step on you don't know how it's going to end. But at least you're doing it, you're pushing yourself out of your comfort zone.

Just be warned, if you're like me on Thunder Mountain, it can end in tears:):):)

There is nothing on earth that could induce me to get on that ride. Not even a three book deal :-)

What a great anaology Sam! I love the bit about the decapitated passenger - note to self - avoid Thunder Mountain on future Florida trips. Actually, that's one of the more tame rides! What about Mission Space? The Rock N Roller Coaster and the Tower of Terror?
Disney is one big happyland, driven by money - have you seen the cost of Coke?

Yes, you need to budget in eating and drinking on site.

I chickened out of all those rides, Gillian - I'm more a Small World kinda gal:)

I'm with Caroline G on the rides : white knuckle, moi? I don't think so - all you adventurous types need a coat holder and that's me. Great analogy though - details matter, but not if the substance is lacking. As writers the faith we have in ourselves -(I know, I know - it falters all the time)- is possibly our greatest asset. So let's hear it for self belief, girls and guys!

Yes, Lydia, the self-belief to let go of those coats and get on the ride:):)

A great post and I had no idea the grass was sprayed green!

I think you're absolutely right that rejection is only a new opportunity and that your story has to be the very best it can be. I've just got my first publishing deal and resented the amount of polishing my agent demanded before she sent the MS off to publishers but I soon realised how necessary it had all been.

PS I hated it when I went back to Paris recently and was called Madame! In my head I'm still 21...

Me too, i HATED being called Madame but there's now way i'd pass as a Mademoiselle now:)

Fascinating insight into Disneyland - and I like the analogy with writing, especially the bit about detail - I keep being reminded about this and how absolutely vital detail is, and how I should never, never skimp on it.
Susiex