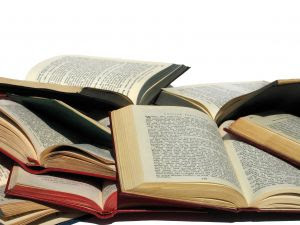 My children , ages 12 and 14, wrote a song the other day. It was a great song, very catchy, and I told them so. What I didn’t have the heart to tell them was that it was , more or less, The Passenger, by Iggy Pop. Yes, different lyrics, slightly different melody, but it was unintentional plagiarism, possibly caused by unintentionally listening to an Iggy Pop Greatest Hits CD, my current washing the dishes music.

This innocent tune pinching got me into a rather jaded, ageing rock chick frame of mind: all the great pop songs have already been written, that my budding brother- sister act would really have nothing to add to rock’s rich tapestry except some rehashed perfect Pop, capital P, and they should hang up their guitar and keyboards and get into, I dunno, chartered accountancy.

Then I realised my two little leaves have not fallen so far from this old tree. I got to thinking that all the great and important books about the thing I want to write about-bereavement- have already been written, and that I should pack in my proposal.. Whatever I had to add, which at this over- read point, was nothing, would be surplus to requirements.

I saw great merit, in the dozen or so books I had read. What could I possibly add to this Now That’s What I Call Death! library. The better the book, the more despondent I felt. For example , C.S Lewis’ A Grief Observed, a small but oh so perfectly formed study of losing and finding God again after the death of his wife, was so very excellent, that I had to read large chunks of it aloud, to anyone unfortunate enough to be in the room with me at the time.

Similarly, there is the lesser known, but equally brilliant Leftover Life to Kill, by Caitlin Thomas, grief crazed widow of Dylan, who got through her bereavement by drinking heavily, taking tranquilisers and sleeping with young Italian men, and writing it about it beautifully..

The best accounts are first hand stories of lost wives and husbands, and desperate as I am to be published, I wouldn’t go so far as to hire a hit man for my husband. I haven’t got the psychological know how to write the definitive, really useful How To book. The only thing I’m any sort of good at is making sad stories kind of funny. Is there room, or even a desire, for a funny book about death?

Does it really matter, now that I have had whiff of interest from a publisher who wants to see a proposal?

Michele Kirsch is a freelance journalist.
Posted by Administrator at 13:08

Good luck with it, Michele.

Yes, it's similar to the problem i come up against writing chick lit, but in reverse - publishers wanting more of the same yet that is also fresh and new. You have to strike just the right mix.

the idea of a collection of humorous stories exploring death is actually very appealing, michelle.
almost everyone thinks about death--maybe not every day--but it's the one aspect of living we all face. who wouldn't be drawn to stories of humor and intelligence about this universal mystery?
best of luck to you--i hope you find your niche on the bookstore shelf. i'll be waiting for it. :)

I also think it sounds like a brilliant proposal, Michele. And surely the time has come for a tween Passengers-esque hit? :-)

It's so true that we can be put off an idea before it has a chance to blossom because we fear that it's already been done. But I guess if we give ourselves full permission to write it in our own idiosyncratic way, then it could just become a definitive book. Go for it - and good luck!
Susiex

You've got me humming Iggy Pop tunes now Michele!
And I must hunt out that CS Lewis book - it's one I haven't read.

Interesting blog - thanks for sharing with us!

Good luck with the proposal, Michelle - the book sounds really interesting. I definitely think there's a place for some sensitively-done humour in the discussion of bereavement.

As carolione R says 'sensitively done' is the key isn't it? I'm all for it; I think laughter is the best medicine (even if someone has said that before, it's still true) but when my friend's brother-in-law died recently and she spoke of sharing some very, very black humour with the widow, her sister, (who she loves dearly) another mutual friend was horrified that they could even think about laughing in the face of death.
But then what about The Loved One by Evelyn Waugh?

Marion Keyes wrote hilariously - as well as touchingly - about death (or rather grief) in "Is There Anybody Out There?" There's definitely room for a few more like that!