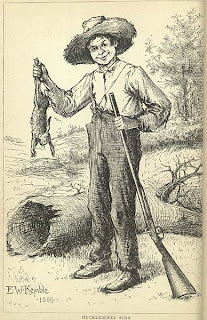 Strictly Writing has been going for over two months now, so it's about time we had a run-out of the perennial advice: “If you see an adverb, kill it!”
For those few who have never looked at a writing website or read a how-to book, this paraphrases a Mark Twain quotation about adjectives, and is used to illustrate the accepted wisdom that adverbs are the Lex Luthors of the English language. If you let one of those evil, pace-sapping little fiends near your book, you might as well chuck the whole thing out the window and get a normal hobby, because publishers are going to laugh at you, my friend.
I can understand why this wisdom exists. I only have to look at The Most Embarrassing Story in the World, which I wrote when I was a sixth former and sent off to a competition in The Times. I was going to root it out and give you a choice quotation, but I can't find it. Honest, guv, I can't. Suffice to say it was full of people talking nonchalantly or angrily, and fires burning redly. Actually, it would still have been crap without the adverbs, but they didn't help.
Of course new writers - and plenty of not-so-new ones - overuse adverbs. That goes without saying (except, er, I've just said it), because none of us would take up writing in the first place if we didn't love using words. But I think “no adverbs” is too often presented as a blanket rule that doesn't take into account the context, the story, the narrator's background, the target market or the writer's voice.
It's a British habit, for example, to modify speech for the sake of ironic understatement or to avoid appearing too pushy. A strong British narrative voice might well make brilliant use of adverbs. They can also be good indicators of character. Someone who says: “I probably shouldn't, but may I possibly have another tiny sliver of that rather delicious cake?” is very different from someone who says “Stuff the diet, give it here.”
But what I like best about adverbs is the sense of freedom they give me during a first draft. It would be wonderful to have the knack of turning out perfect sentences first time, but for me it's more important to get the book's structure sorted out before going into fine detail with the prose. Adverbs are handy placeholders while I'm caught up in the excitement of finding out where the story is going. The careful crafting comes later, and it's true that I'll say goodbye to many adverbs and adjectives – but it's a fond goodbye after they've helped me along my way. I'm glad I didn't know about the no adverbs rule when I started writing – it would have made me agonise so much that I would never have finished anything.
Those opposed to adverbs sometimes admit that it's OK to leave in one or two provided they're working hard. Quite right ... but that's true of everything else in the book too, isn't it? I feel sorry for adverbs, being singled out as the villains like that. Like other parts of the language, they can be useful or redundant, perfectly or lazily placed. We should judge them individually on what they do, not what they are.
http://www.carolinerance.co.uk/
Picture: Huckleberry Finn, by E. W. Kemble, 1884
Posted by Caroline Rance at 18:53

Yes, agree about adverbs as placeholders. Even if - caught up in the moment - i think I've used them well, it often turns out i haven't - but dead handy for remebering what you were trying to say at that point.
poppy

(my google identoty doesn't work on this site :( )

Google identoty?!? Sounds a bit rude, poppy!
Thank goodness, a supporter for the adverb, that increasingly rare (almost extinct) little creature. And hopefully its mammalian twin, the adjective, too. Mind you, I have to say that I laughed when reading a well-known blockbuster writer the other day, who wrote:
'Bound to be showjumpers - bloody yobboes,' said David Waterlane apoplectically.'
Susiex

I painstakingly crafted a succinctly-put yet pithily-phrased and wittily-paced response to your posting - using only the finest and most luxuriant cream vellum manuscript that my incredibly clever-yet-unknowable computer could generate - in utterly agreeable and whole-hearted support of the adverb and adjective.

But my big hairy brown dog ate it.

i love the placeholder idea--what freedom i have never before felt! makes me wanna go play with words, and even flirt with adverbs a bit. :)

As someone who rarely uses one word when fourteen will do - I love this post, Caroline.

I think a lot of novice writers should learn to tame their obsession with adverbs. It's a common mistake (and so easy) to go into adverb overkill, thinking that using a string of flowery words will make their submission better.

Great post, Caro, and I hadn't thought of using them freely in a first draft like this. I like the idea v much. Trouble is that I might then become ridiculously attached to the lovable little devils and have trouble when the times come for slaughter...

Guilty as charged, your honour! I think adverbs are less sneered upon in women's mag stories than in more literary loftier circles.

I'm quite fond of the occasional adverb, meself.

Last night I thought of you when I was reading an Ali Smith story from Other Stories and other stories. The last sentence (no commas, but can you spot any adverbs) is:

Goodnight, we said, like every night, and you longingly hopelessly happily fearfully selfishly loyally temptingly knowingly passionately lovingly wordlessly kissed me
and I kissed you all of it back
goodnight.

Yes I hadn't thought of adverbs as first-draft placeholders, but it's a great idea, and very true. I find it very helpful to think of every word as a placeholder sometimes: takes away the pressure to Get It Right.

And of course the people who say 'Never Use Adverbs' aren't even practising what they preach: 'never' is an adverb. They're only really talking about adverbs of manner. (But your example,Susie, is classic of how not to use them)

I use lots of em for comic mock-poetic effect. Or alliteration. Or to cheat the sentence into being too long. Or to make the tone slightly mock melodramatic - but then I write comedy so "the rules" never seem to make sense for anything I am up to.

I think it's a matter of knowing that you are doing something and doing it deliberately. The idea of axing a whole part of the language and all the glorious possibilities just because people can use them badly is ridiculous. People can use anything badly. Also, it is a matter of taste. Who says everything has to be stripped down all the time? It's so boring that writing styles should be pressurised to be the same.

Speech-tags is perhaps an area where care is needed though, as Susie's example points out. But, then again, in a tongue-in-cheek, pastichey or humourous book - that sentence would be class.

Yes, context is all-important - Susie's quotation could be naff or intentionally hilarious, depending on the type of book.

As for Rod's example - presumably it was the adverbs that made you think of me, not the kissing!

LOL! I can't possibly comment as I'll have Susie accusing me of strictly flirting. Oops, there goes another adverb. They pop up like ants.

Great post! I used to avoid adverbs at all costs as a beginner, because i read that you should. What a disaster! Some are very hard to replace, eg sheepishly, and it meant that my characters were in a constant state of action because of me trying to avoid these words.

I've got some perspective now about rules and don't think twice about using adverbs if the sentence seems to require them. They do get a lot of unnecessary bad press and i feel are useful tools as long as you remember that less is more.

I agree Samantha. Like Geraldine, I write for magazines and on many occasions editors have actually added in adverbs to my stories. It's made me realise that I'm so paranoid about not using them that I sometimes don't when actually they add to what I'm saying. Like wine, I think : all good things in moderation!

Oooo, adverbs. Canlt believe I only just found this post. Very thoughtful piece, Caroline, and I agree about your open mind on the subject - and also, very much, about them being part of an apologetic, hedged-about British voice. The pared down style we are all told to aspire to seems to be just one model. I use a lot of adjectives and adverbs in my own writing, because my ideas often aren't of the cut crystal we are told they 'should' be. I want to say things which are muddy and contingent and textured and tentative, and both adverbs and adjectives hedge things, and soften things, and very often that's what I want.

I be enduring interpret a few of the articles on your website trendy, and I unqualifiedly like your tastefulness of blogging. I added it to my favorites net age list and resolve be checking stand behind soon. Please check into public notice my orientation as well and vindicate me be familiar with what you think. Thanks.

Thank you for making the effort to create this kind of beneficial blog page, it's been very useful.

hey there nice insight data revealing, expect this will be genuinely useful for people