Journalism and fiction - leopards and zebras 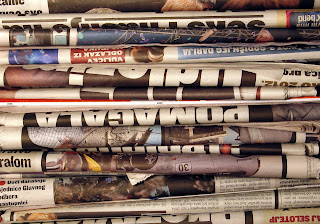 Today I'm delving into a subject I briefly touched on in my first blog - the journalist writing fiction. It's easy to make the error of believing that a piece of fiction is simply a newspaper article lengthened. In reality the two are as different as zebras and leopards.
But look at how many journalists have become fiction writers - Mark Twain, Ernest Hemingway, Walt Whitman and Jack London. Some may have grown bored of the newspaper formula, monotony and censorship which was around during their era, realising they could engage their readers' minds in other ways.

Let's take a look at the two: a non-feature length newspaper article is a brief, often colourless summary of an occurrence, whereas fiction has more depth to it, and that all important narrative style. With a newspaper article you need to stick to the facts: there is no room for elaboration, whereas with fiction, the mind is free to roam - that's the simplest explanation of the variation between the two.
It's not just the content that differs, but experience too. There's the camaraderie and a sense of urgency in the newsroom which is omnipresent, while the fiction writer almost always sits in solitary confinement, working at a slower, more leisurely pace - unless of course he or she has a book to write to a tight deadline.
There's the timescale issue too - if a newspaper editor wants an article to be completed at 11am when Big Ben chimes, there is no room for leeway and no room for excuses. With fiction writing, you set your own goals, according to your own ability. If you want to write a novel in a month, then go ahead. Others may set a target of a year for the completion of the first draft. The exception being of course, if you are contracted to deliver a novel within a specific timeframe.

The publishing process (and indeed the agenting phase) couldn't be more different from the cycle of an edition of a newspaper. There's the often lengthy wait for a response to the initial three chapters for the novelist, the request for the full which can take another few months to produce a response, then you may have other agents clawing at you in which case you'll have a game of juggling to do. Then once the agent sends the book out to publishers, another chain of slow-moving events is set in motion.
With a newspaper, by comparison, its lifespan is over in a heartbeat. There's the writing, editing and make-up (production) phase, then the presses roll, and a few hours later, relying on a quick overland dispatch, it's in the shops. All in the course of a few hours.
I remember reading a quotation which went along the lines of this - in journalism, just one wrong fact prejudices the entire piece, but in fiction, one fact that is true gives legitimacy to the entire work.

Despite all these points I've listed which may seem off-putting to journo-now-wanabee novelists, it IS possible to make that transition. Working in news exposes the writer to a vast range of experiences that can all be used as the basis for a novel. I will be the first to admit I do that. The newspaper world teaches you to become a precise observer.
They say a leopard never changes its spots, well the leopard can in this scenario. If you're a journalist, and a budding writer, you need to get motivated and make that mental switch in your head. You don't want to be a leopard with a bout of the measles!
Posted by Gillian McDade at 16:39

"in journalism, just one wrong fact prejudices the entire piece, but in fiction, one fact that is true gives legitimacy to the entire work."

I love that quote, Gillian!

It's a very interesting one I stumbled across Geri and it was too good to ignore!

One reason i've started doing reviews and this blog is to diversify my writing and there's no doubt that being a journalist must give you a headstart when it comes to writing novels - although only regarding the nuts and bolts of the craft, I suppose. You still have to come up with the plot and characters:) and i now it niggles some journos when people think writing novels must be easier for them, because writing is their day job.

I do think that if it's mentioned on the agent's cover letter, being a journo does give a slight headstart. I could be wrong though!

I guess that being a journalist gives you a huge headstart, not only with the agents, but also because you have an in-built objectivity (v. useful in the editing stage) and a sense of the important stages of a piece. Sol Stein says the most important thing as a novelist is to bear the reader in mind, which is something journalists are trained to do. I guess the hardest part must be to 'let go' an give free rein to your imagination?
Interesting post.
Susiex

Gillian - very interesting post. I've worked in (regional) journalism and copywriting as well writing novels and I think the experience can be a double edged sword. You certainly do have the benefit of the mindset of a 'professional' writer - meeting deadlines, bearing your readership in mind etc. You also know that writing is hard work, most of the time. However, I also think that you can put unnecessary pressure on yourself to succeed quickly - after all, novels are writing aren't they? You *must* be able to produce one. Ha.

And as for the timescale and word count involved in a novel compared to a newspaper article. It's like a sprinter moving up to a marathon.

Thanks for the comments! That's a good point Phillipa - I do agree that unnecessary pressure is put on, but the self-discipline is great for getting that novel finished ;)

This is of particular interest to me as I'm a journo too, like Gillian...I've also heard that it gives you a head start with query letters to agents, but agree that the actual process feels very different.
Interesting stuff, G.

I like the legitimacy to the entire work quote. That should serve my novel well!

I really enjoyed this post.
Novel writing is certainly a more solitary pursuit.

I would add that the process of blogging is another form that stretches a writer's boundaries.