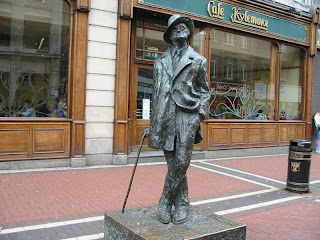 Bloomsday is an event celebrated annually to commemorate the life of the great Irish writer James Joyce, one of the most influential of the twentieth century. And visitors to Dublin today (June 16) can relive the exciting events of his epic novel Ulysees, and follow in the footsteps of the one and only Leopold Bloom.

The Bloomsday celebrations offer a wide range of cultural activities including readings from Ulysees as well as dramatisations featuring people in full dress and pub visits. Apparently hardline Joyceans have been known to hold readings of the entire novel, often lasting up to two days.

It is very much a tradition in Dublin to dress up and go out for the day, visiting the locations of the book and enjoying the excerpts, walks and other activities associated with Ulysees.

The partying has been going on all week, but an event running today (Wednesday) is worth flagging up. If you happen to be in Ireland, go along and take part in the Bloomsday Walk which runs all day (check times). It will pass some of the most important Northside locations, taking in Belvedere College, Eccles Street, Leopold and Molly Bloom’s house, and a number of other Joycean locations around Parnell Square and O'Connell Street.

Also today (Wednesday) running from 11am to 4pm at Meeting House Square in the Temple Bar district is an afternoon of readings and songs from Ulysses. Audience participation is a major part so bring along your copy and read your favourite excerpt. There will also be musical performances from Ulysees featuring Deirdre Masterson, pianist, Dearbhla Brosnan and other guest soloists. It is free and open to all ages. The film 'Bloom' will also be screened today at Cineworld in Parnell Square. This is Sean Walsh's adaptation of Joyce's love story of Molly and Leopold Bloom.

And it's not just in the Irish republic where people go mad for James Joyce. The Syracuse James Joyce Club holds an annual Bloomsday celebration in New York where participants read excerpts from the book and dramatise parts of it. You can also party on down Joycean-style in the Norwegian capital Oslo, or in Philadelphia, Sydney or Melbourne. The list goes on....

If you haven't read Ulysees, you really should make the effort because it's a legendary book. It's much easier than War and Peace if that puts your mind at ease. Happy Bloomsday to you all. And remember - no matter where you are today, pay tribute to the great James Joyce.

http://www.youtube.com/watch?v=ywsgRH_qPXE&feature=related
Posted by Gillian McDade at 06:00

Thanks for that, it all sounds great fun. It really is time I read Ulysees ...

I've always felt I should have read it. But it sounds HARD!!

I've read The Dubliners...does that count? :)

No, Simon and Caroline it's not hard at all. I have read it for both academic and leisure purposes!

The Dubliners does NOT count!! ;)

Dublins is a lovely book! He was nice and sensitive when he wrote it but a pure braggart when he started 'acting the mick' on Ulysses. I often wish that he'd gone on in the vein of the short stories; there'd have been so much lovely prose to read. Academics like Ulysses because it nourishes their elitism :)

I'm another one who read and enjoyed The Dubliners but who struggled with Ulysees even though I was told I had to read it to be accepted on the MA Eng Lit...but that's another story. I still haven't finished it!Its on my list of books to read before I die, though