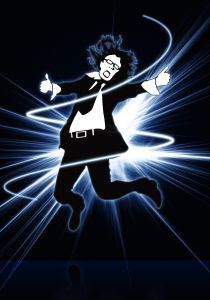 I love doing readings or Q&As at writing groups and libraries. They're my absolutely best gigs.
Worst, in case you're wondering, are book signings in book shops...Lord, how bloody dreadful they are. No one buys a book or speaks to you. Hours go by, until the staff take pity and start making you cuppas.
Anyways, as I say, I love a good writer's group. I'm not sure how good for business they are in the long run, but yapping about writing with other writers is the most fun you can have outside a hotel room.
Yes, the same stuff comes up again and again. But I don't mind that because there's always something new to challenge and inspire. I rarely leave without my mind working over time.
The last one I did was no exception. I'd been invited in the Winter, when book three came out. But it snowed, then the kids got ill, then the volcanic blinking ash cloud kept me in Bangkok. So I finally got there this week.
They were a great bunch. Lively and incredibly creative. One of the members read out a short story that was feckin' brilliant.
What really surprised me on this occasion, though, was when the subject of literary agents raised its ugly head. This is a regular feature of course, and generally takes the form of an interogation into how I secured mine. And some pushy bugger will sometimes ask if I can recommend his WIP.
This time, though, things took a different turn.
After the initial question of whether I have an agent, I was then asked, point blank, why I bothered.
Why couldn't I just sub my work directly to a publisher? Why would I pay someone 15% to do a job I could do myself. Writers are, I was told, the best champions of their own work.
Before I had a chance to catch my breath another writer asked me why any artist would want to impair their creative freedoms by having an agent? They insisted on revisions didn't they? And what gave them the right? Who set them up as the gatekeepers of fiction?
The discussion went on until the end of the session and then continued in the pub.
And I've been thinking about it ever since. Trying to settle my own views. I mean, I don't jump with joy when I see my agent's cut from my advances and royalties so why pay it?
Being honest here, the main reason is of course, that my agent has been successful. He has sold all my books to date. I don't have anything unpublished under my bed and I'm contracted for another three. He did all that. I wouldn't have known where to start.
I guess, I could have looked up the various publishers, and sent my subs in, but I won't fool myself into thinking that this would have opened as many doors as a simple phone call from someone who has been in the biz for years. It's all about contacts.
Wrong? Maybe. But I'd rather deal with the reality of any situation and turn it to my advantage than try to fight it.
In this respect, I am, I'm afraid, not my best advocate. Perhaps I'm just too British. Either way, the thought of going out and flogging gives me the shivers.
As for foreign deals. Well, come on, I have A level French. How could I possibly?
Telly rights? C'mon. This is me, not Richard Curtis. I'm just some northern bird who needs her roots doing. I'd be laughed out of court.
So ultimately, I have an agent because he can sell...maybe other writers could do this. But not me.
But it's more than that, even.
When things go wrong, and they do, he is my bad cop. Horrid covers? Arguments over edits? Disagreements over money? He da man.
I like a warm, trusting relationship with my editor, and most certainly do not want to end up bickering over my next title. Let my agent do all that. Behind the scenes.
Again, I'm sure there are more forthright types than me who can battle it out. I'm a wimp. Guilty as charged.
Anything else? Defintely.
Writing can be a funny old business. The worry worm can hit at any time. Or even a full blown attack from The Fear. Then there are the rejections, the bum reviews, the poor sales. But with an agent, you're never alone. He's on my side. He cheers me on. We're a team.
I've often heard it said, that diamonds are a girl's best friend. But I'm sticking with an agent.
Should others? Well that's a personal choice. But it's one that should, I feel, be taken in full knowledge of what it is they actually do.
Posted by Helen Black at 06:00

Alas, I think in todays world of publishing its nigh on impossible to break through initially without an agent. So I guess for that alone...the ability to open the door to having your novel published? But actually all those other things you mention Helen are spot on. I'd much rather pay the money and have someone fight my corner with me.

Excellent post, Helen. You've hit nails on the head. These reasons are PRECISELY why I need/want/yearn for an Agent. So if there're any Agents reading this who want a Southern Bird who's roots need doing too(love that, Helen) then please look no further. Oh, and I can write (of this, I am sure. It's all the rest that I'd be rubbish at).

I think that's it, Debs. The making stuff up and writing it down, I'm fine with.
It's other things I don't like and so am happy to pay for.

A bit like wine. I want to drink it, but I don't want to tread the grapes myself.

Yes, these days every writer (or almost every one) needs an agent to get published. And yes, I can see why this is. However, what the writing-group member said about gatekeepers also has some truth. Agents are as subjective as the rest of the world, I guess, and may well pass on a very good book for purely emotional reasons. Ergo, there are probably thousands of very good books out there which are not getting near a publisher.
Susiex

Great post! At a recent event I was at a publisher was talking about the need for an agent and he said he nearly always ends up paying much more for a book when an agent is involved. They know what it can really earn whereas an author is (usually) too inexperienced to know this. So the cut you lose on the agents percentage is minimal compared to the extra income you have generated from having an expert in your corner in the first place.

Great post. Mind you, it is good - perhaps - for writers to realise some publishers can be approached without an agent. I think a lot of people don't know this. But the numbers are diminishing I think. Lots of smaller publishers are saying no unsolicited subs now too.

It's a tough world out there.

Ah? I thought in book shops that people who were fans of your book would ask you questions for hours on end?

Guess I was wrong.

Susie - yes indeed, agents do act as a filter for the publishers and of course, some good ones will slip through their net.
That said, I think publishers would rather take that risk so as not to have to deal with the slush pile.

I think they perfer to deal through agents too when things go wrong. Resolving problems behind the scenes with ana agent works equally well for the publisher as it does for the writer, for precisely the same reasons.

Shigune - perhaps the like of JK spend hours with fans, but not me LOL. My experiences so far have been torture. I think many shoppers are just too shy to approach you. And busy of course, if it's a saturday afternoon.
HB x

I also think that the idea that agents restrict you is thinking that the cart goes before the horse. An agent's job is to be the interfact between you and the book trade not just in terms of contracts and tricky moments, but also in terms of selling your book: in as much as they work with you on the book (which varies, according to both agent and book) they're in the business - literally, as that's how they earn their living - of trying to find the intersection between what you've written, and what the trade wants. Yes, it's subjective, but then that's true of everyone's take on every book. Some agents are alchemists in helping you (me) to find that intersection - although that doesn't mean you can afford to submit a book which is any less polished than perfect. Others are not, but are brilliant at spotting the book which the trade wants, or real talent-spotters for what the trade doesn't know it wants yet.

Fundamentally, your agent is the person in the trade whose interests are closest to yours, which - however much you love and your editor love each other personally - you can't say about anyone else in the trade.

It's other things I don't like and so am happy to pay for.
Banner Advertising Network India

Great post, Helen. I agree, an agent is such an ally, a support - for all the reasons you say as well as for that all-important first editorial once-over.

Great post, Helen. I agree, an agent is such an ally, a support - for all the reasons you say as well as for that all-important first editorial once-over.