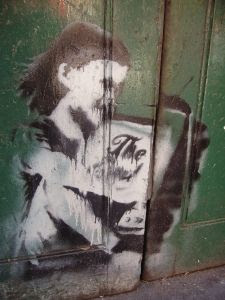 As I write ‘The End’, I’ve noticed I get the same feelings as I do when I read those words at the end of a good book.

I’ve recently finished writing my second teenage book, ‘Let’s Go Round Again’ (in case there’re any Agents out there who might be interested *waves*) which is about a 16 year old girl who finds herself transported to 1979 and has to try and live with her own teenaged mother whilst she finds a way back to 2010. And it’s been an absolute pleasure to write… well, the middle was a bit testing, but then at my age, I’m getting used to feeling a bit saggy around my mid-parts.

And you can’t write a book without forming relationships with the characters you’re writing about. You just love them. To bits. Even the bad guys. In fact you kind of love them even more because you made them that way – and you know why they’re that way. Their nastiness emanates from your imagination after all, so it’s not their fault. You’re their Parent; the Creator. And it’s natural you’re going to miss them. You gave life to them, you’ve been with them through the lows, the highs, the lights, the darks and every shade in between – they’re your baby chicks. And even though the voyage isn’t always smooth (in fact the more arduous it is, the more memorable) you’re going to worry that those events which helped shape the outcome were definitely there for the greater good and not just squeezed in for pleasant distraction - a.k.a. word count.

So, writing ‘the end’, for me anyway, is such a painful pleasure. Half of me doesn’t want to let go, the other is giddy with delight that the journey has finally reached its conclusion and that now everyone has their happy ending. Or at least an end.

And it’s the same with a good book. After I’d put down ‘The Help’ by Kathryn Stockett - the first Good Book I read this year - I felt almost bereft with grief when I felt those two final words creeping up. In fact at three quarters of the way through, I’d started to ration my reading so that it would prolong the agony of reaching the end, and yet I still felt the familiar slug to the stomach; as if I was about to lose an intrinsically important part of my life. I was going to miss all those people who’d become such a bit part of my life. And when they weren’t there anymore, living their lives before me – with me - I felt a kind of bereavement.

So after the euphoria of finishing writing my own book, I now feel the same way. Following the familiar 24 hours of buzzing with elation at having penned another ‘whole book’, the adrenaline has started to wear off and the knowledge that these people I’ve breathed life into have ended their particular journey with me, let the curtain down on the dizzy extravaganza that I’ve sat and cheered and snarled and cried in turns through. I feel like some friends I’d made (up) have just… gone.
And if that sounds a tad over-sentimental, then I can’t apologise because that’s precisely how I feel when it comes to

the end
But of course, the re-writes and the edits mean I’ll be popping in to improve their journey and, who knows, I’ve heard sequels and prequels are pretty hot these days too…so it might never really be

Email ThisBlogThis!Share to TwitterShare to FacebookShare to Pinterest
Labels: the end, the help, YA

Never fear Debs, by the end of the editing process you will hate every last one of your new friends.
HB x


I agree wholeheartedly with you on this, Debs.
Here's a confession...I always have a little cry when I type The End. It's such an emotional moment.

I've heard such good things about The Help too..must add that one to the list.

I meant to add...that is one creepy picture, Debs!

Writing The End used to always make me feel anxiety. It's like moving to a new town. You have to figure out who will be your new friends and how to get started with them. Starting the next book is always an awkward challenge.

Thanks for the post and congrats on reaching The End of your book.

Congratulations on reaching The End, Debs.

I always slow down as get towards the end. With my current wip I felt so sad at the thought of leaving the characters behind that I've decided to have them in my new book. I couldn't bear to leave them behind!

Once I'd made that decision, the structure of the new story with its new lead protagonist became much clearer. And now I can't wait to get started.

I'm all for sequels and prequels!

I feel just as you do when reading a seriously Good Book. I hope I'll feel that way when I write one, too.
Susiex

Thank you for this--it's so inspiring to hear someone voice what I've experienced! The last time I finished a major writing project, Michael Jackson died. I decided to paint three rooms in my house. It was a very tough summer...