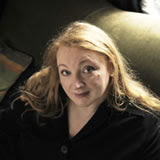 Shakespeare, Dickens and Keats. Shakespeare because it would be like meeting God; Dickens because he's the Shakespeare of novelists and would be tremendous company, and Keats is my third great hero not least for struggling on up Parnassus despite the most dreadful disappointments and ill-health, and because he would have so loved to meet Shakespeare.

I wish I could say it is something recherche like quails eggs but it's Divine chocolate.

Longhand or computer?
Longhand for my diary, which I keep every day for planning, notes and interviews for novels, computer for actual writing. It helps get over the terror of the blank page.

Tabloid or broadsheet?
There's little difference these days, but broadsheet (The Telegraph). It's been stimulating to read the paper that was in opposition to the existing Government, but it also has the best news coverage. But I also read The Times and The Indepdendent on other days, and the Guardian online.

Both. My favourite bookshop is Primrose Hill, which has always been fantastically supportive, but I get quite a lot from Amazon and the Book Depository, and also from second-hand bookshops in small West Country towns.

Both. That stage is fun - you've got something to shape and play with. It's the raw material that feels like ripping your guts out.

Both, at different stages. I always know the general shape of a story, but I'm often as much in the dark about how my characters get there as anyone else. Eventually, I make a list of old-fashioned chapter headings with what happens in each very briefly - I find the Edwardian method, which I learnt from PG Wodehouse's notes, very helpful. I also listen to a lot of classical music, particularly by Bach. I like music that is rigorous and shapely.

As much as you can that's good. There are no other rules. Read for pleasure and enlightenment, and if a book is still boring you after 80 pages, give up.

I wish I had written….

At the moment, Elizabeth Jenkins's The Tortoise and the Hare, recently re-published by Virago. It's a stunningly good novel about a woman powerless before her husband's affair with a neighbour, written in searing prose; and it actually has an unexpectedly uplifting ending.

I get most excited by…Living.

A doctor. I wanted to be a doctor originally but wasn't good enough at maths. But I love the stories about people that doctors pass on to me.

An author should never…
See other authors as rivals. We are all in the gutter looking up at the stars.


Nice questions! Thanks for asking...

Amanda is the author of six novels. Her latest is Hearts and Minds

She is also the book critic for The Times. Amanda blogs here
Posted by Caroline Green at 06:00

Great interview - thanks Amanda - always loved the lying in the gutter staring at the stars saying - who originally said that? Inspiring post.

Great interview. I discovered Amanda Craig a few years ago and am a big fan. Particularly impressed that she prefers chocolate to quail's eggs!

I'm a big fan too, Karen. Thought the Hearts and Minds, was stunning.
Thanks again Amanda for taking time to talk to Strictly!

PS Debs, I think it was Oscar Wilde who said that.

Thanks for your contribution, Amanda. Not so sure, I'd invite the old codgers to dinner though! I'd prefer present day novelists with whom I had something in common. But that might involve competition and possible throwing of peas.
(*note to self - check out The Times*)

Thanks for a great post, Amanda. Will look out for The Tortoise and the Hare, which sounds intriguing.
Susiex

Thanks Amanda - off to add Tortoise and The Hare to my holiday list.
Debs, It was Oscar Wilde!

I always loved the lying in the gutter staring at the stars saying - who originally said that? Inspiring post.
Banner Advertising Network India